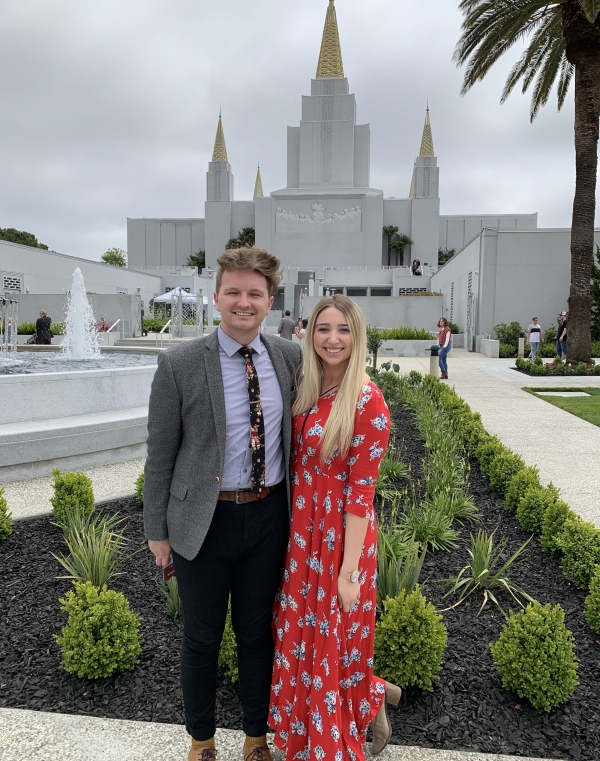 Jordan and Brielle Nally (pictured), both seniors at Brigham Young University-Idaho, pose in front of the newly renovated Oakland Temple of the Church of Jesus Christ of Latter-day Saints that was rededicated on Father's Day (June 16) and opened to church members only following a month of public tours.

The hilltop landmark with its five golden, spotlighted spires, was closed in February 2018 to upgrade its mechanical systems and refresh the temple's finishes and furnishings.

Following tradition, the church opened the 55-year-old temple to the public last month, attracting an estimated quarter-million visitors before closing its doors to non-members June 1. The last time the public was invited to tour the temple was for a similar brief period after its was built in 1964.

At that time, the Oakland temple was only the second in California, following the first built in Los Angeles. There are now seven in the state, with an eighth planned in Yuba City. The church currently has 201 temples operating, announced or under construction throughout the world, including a new temple recently opened near the Vatican in Rome.

The rededicated Oakland edifice, generally referred to as the Mormon Temple, is losing that nomenclature as the church moves to reflect the faith’s correct name as Church of Jesus Christ of Latter-Day Saints. In messages to its members, the media and others, “Mormon” and “LDS” are no longer appropriate.

Even church President Russell M. Nelson acknowledged in a press release that it will be hard work to undo 189 years of history, culture and practice associated with the word Mormon, “but with God the impossible is possible” and church leaders understand that this is “a complex, multifaceted effort.”

I had the opportunity to take three tours of the renovated temple last month: one on media day when local and Salt Lake City church leaders walked us through the 90,000-square-foot temple, another with Ken and Carolyn Mano and others associated with the Pleasanton Latter-day Saints churches and then with my family, including my grandson Jordan Nally and his wife Brielle (shown above).

Each tour offered a more comprehensive view of this most unique and interesting example of modern church architecture.

Before moving beyond the temple’s check-in desk, church members go into locker rooms where, believing white symbolizes purity and equality before God, they change into white clothing. We were allowed to pass through without changing, moving into the baptistry, an elevated pool of sacred water built on top of carved oxen. It’s here where baptisms can be performed on behalf of those who have died, a practice that Latter-day Saints believe was followed in New Testament times but that later was lost.

From there, we took seats in one of many instruction rooms on the temple’s second floor. These are theater-like assembly areas with the latest in audio-visual capabilities, where members attend presentations on various aspects of their faith. We also had an opportunity to spend a few minutes in the Celestial Room to contemplate in silence however we wanted, a welcome respite from the world outside.

Just as special as the various faith-focused rooms in the temple is its stunning interior décor. True to the intentions of the modern era, the interior of the temple is carefully restrained in its ornamentation. This is evident in the use of wood and stone where clean, geometric designs are sparingly used. The original woods are not stained, only sealed, to show the original color and grain.

Featuring clean, elegant lines, most furnishings have been created in neutral colors— whites, beiges, greens, and subtle golds. White oak, brass, and glass have been widely used in chairs, sofas, and tables.

The flooring in the entry area is tile from Greece. The baptistry has earth tone tiles that came from China with gold leaf linework from Utah. Carpeting throughout the temple is in shades of gold broadloom. The doors in the celestial room area are primavera wood from South America. The custom hardware is made of brass from India. Some sealing rooms where marriages are performed feature ribbon-striped mahogany from Africa. The artwork is also special, including Adam and Eve and Christ in Gethsemane by Niki Covington of Lazio, Italy.

The exterior of the building is faced with Sierra White granite and is minimalistic with little ornamentation. The five-spire design of the building hints at buildings of far-eastern origins, such as the Taj Mahal in India and Angkor Wat in Cambodia, and reflects the diversity of the residents in the area.

Our tour concluded outside with stunning views of San Francisco Bay.

For years, I have viewed the temple from I-580, always wondering what it looked like inside. Probably most surprising to me was to find that this soaring cathedral-like temple has no large sanctuary inside where members gather to worship on Sundays. Instead, as I learned on my tours, the temple offers dedicated rooms geared toward individual prayer, church instruction, marriage and families.

The temple is located at 4770 Lincoln Ave., Oakland. For more information, sign onto www.oaklandtemple.org/