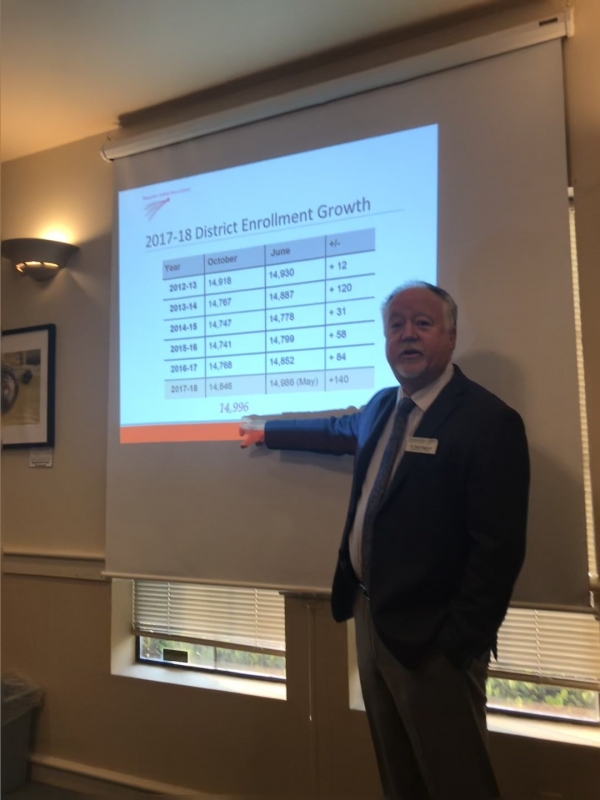 When schools closed for the Christmas break a year ago, the 14,856 students in the district went home for the holidays. When schools opened two weeks later, 140 new kids showed up, a surprise not predicted by the district’s demographer.

Besides rushing to find seats for all of them, the district had to hire 11 new teachers, not an easy task in the middle of the school year.

“The demographer’s predictions were wrong,” Haglund said. “The surge was mostly at the elementary school level. That’s why we have an enrollment issue now. Had that trend (the demographer forecast) not reversed, we would have 200 fewer kids in our schools,” not 140 more.

Analysts blamed the surge on high density apartment projects that have been completed recently after the city incorporated land use changes for 70 acres of largely undeveloped properties to meet state-mandated housing requirements.

But that wasn’t the case. When the district checked to see where the new students lived, Haglund said they mostly came from homes their parents were renting or bought in the Val Vista and Valley Trails neighborhoods, which are served by Donlon Elementary School where the newcomers showed up last January, asking “where do we sit?”

“This is where new families can buy a home in Pleasanton,” Haglund said. “Homes there are less expensive. Those neighborhoods are aging so people are moving out of homes that they that they bought 30 or 40 years ago.”

So it’s not the apartments causing enrollment increases, it’s home resales, especially in these neighborhoods, that are continuing.

While many favor raising the current 650-student limit to 700, Haglund pointed out that five of the district’s nine elementaries already handle at least 700 students. At the start of the year, Donlon had 814 students, Fairlands had 785 and Walnut Grove a total of 728. Adjusting current school boundaries also has been considered. That could solve problems for now, but Haglund said that would upset everyone in town.

Converting Donlon Elementary and Hart Middle School to K-8, which is being considered, would require spending $14 million over what it would cost to build a new school. The district just doesn’t have the money for that. However, if the city’s East Side is developed with housing, developers would pay for a new school there, which Haglund said would be a K-8 school.

The recently-approved $270 million Measure I1 bond calls for building a new elementary school, but Haglund asked where. He’s spent months searching for an available school site in north Pleasanton, where the school is needed, without success. He did find three office buildings that the district could buy and tear down, but would cost $45 million before a new school could be built. He called that “ridiculous.”

The district also owns a 3-acre school site on Vineyard Avenue where an elementary school to be named Neal was to be built years ago. Once planned to serve the Ruby Hill community, most of the children who lived there are now in college or beyond and the school is no longer needed.

“It’s nowhere near where the kids are today,” Haglund said.

Haglund said he and a study group will propose their recommendations for handling the district’s enrollment dilemma at a workshop meeting of the Pleasanton school board on Dec. 18. The meeting will start at 6 p.m. in the school district’s headquarters at 4665 Bernal Ave.


EDITOR'S NOTE: An earlier version of this blog stated that the Dec. 18 meeting would start at 7 p.m. The meeting will starts at 6 p.m.