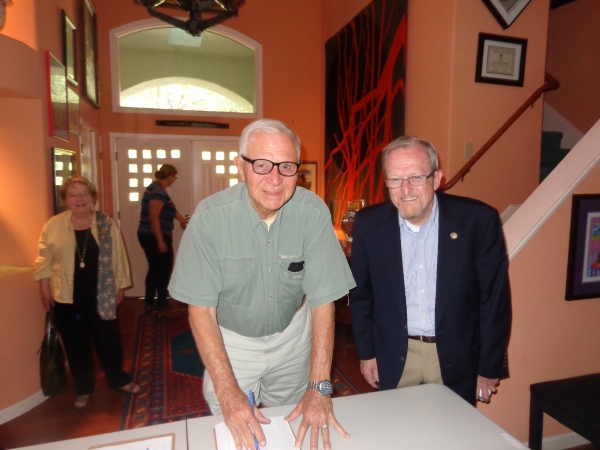 Chris Miller (left in picture) joined Mayor Jerry Thorne Monday to sign nomination papers for the mayor, who is seeking re-election to his fourth (and final) term of office on Nov. 6.

Miller, co-founder of the Pleasanton Military Families organization and a former Army helicopter pilot in Vietnam, was among a house-full of Thorne supporters at the event, held in the home of Bob and Joyce Shapiro on Kottinger Drive.

As with all candidates, Thorne needed the signatures of at least 25 registered voters who live in Pleasanton before he could officially file for the election.

Thorne was first elected to the City Council in a special election June 7, 2005, and then re-elected by wide margins in November 2006 and again in 2010. In 2012, he was elected mayor, a position that in Pleasanton is limited to a total of eight years with the mayor facing voters for re-election every two years. Re-elected in 2014 and again two years ago, Thorne, if re-elected, will be termed out in 2020.

Thorne said he has put his 40 years of business experience to work as mayor to bring fiscal sustainability and pension reform to Pleasanton.

He cited as major achievements the ongoing financial success of Pleasanton, which closed the last fiscal year with a surplus of more than $6.5 million, spending less than budgeted and gaining $115.7 million in revenue overall, primarily from higher property and sales tax receipts. He said that was the result of "vision, discipline and planning."

So, in his final two years, Thorne plans to focus on finding ways to expand Pleasanton's vibrant and growing life sciences sector by bringing together the leaders of medical, biotechnology and device firms now here.

"We want to make sure we are meeting their needs and to grow this vitally important industry cluster," Thorne told his supporters.