﻿ Around Pleasanton: July 4 fireworks halted at fair, this time for good | Around Town | Jeb Bing | PleasantonWeekly.com |
Include Photos | Include Comments | Print this page | Close Window

Around Pleasanton: July 4 fireworks halted at fair, this time for good 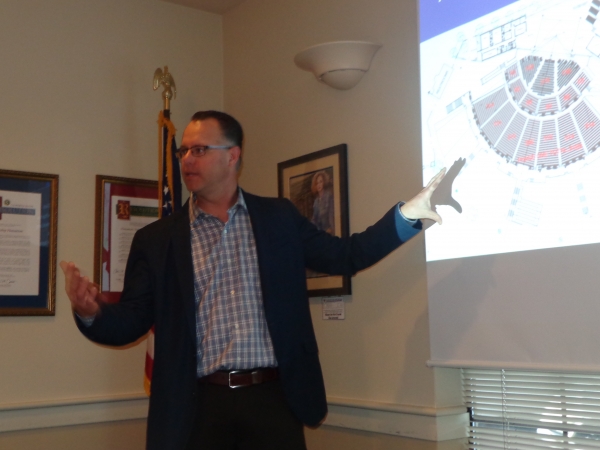 Alameda County Fairgrounds CEO Jerome Hoban (pictured) spoke to the Pleasanton Chamber of Commerce about a range of topics earlier this month, including the cancellation of the Fourth of July fireworks spectacular.

The popular and long-traditional Independence Day fireworks show at the Alameda County Fair has been canceled, and this time it's probably for good.

Alameda County Fairgrounds CEO Jerome Hoban told those of us attending a recent Pleasanton Chamber of Commerce forum that the decision to close the fairgrounds at 6 p.m. on July 4 was made by his Board of Directors with the concurrence of both the Alameda County Sheriff's Office and the Pleasanton Police Department.

The decision came after a review of fights last year that led to the arrest of seven people when a melee broke out on the midway, disrupting Independence Day festivities at the fairgrounds. This only three years after the return of fireworks at the fairgrounds after a 1998 Fourth of July shooting incident.

I was at the fair with my family at the time, and we took shelter behind a food stand as the gunman, later identified as a 23-year-old Richmond man, opened fire, causing a stampede that injured 16 people.

Sheriff's deputies nabbed and stopped the shooter. The fairgrounds were closed immediately and a moratorium was imposed until 2014, when the fair's curfew was lifted and fireworks resumed.

Hoban said that ending the fireworks show and closing the fairgrounds early on Independence Day was a tough decision. Nearly half-a-million people jammed the gates at the 2014 fair, with record crowds on July 4 when the fireworks show started again.

"People came just to see the fireworks on July 4th because they hadn't had them in so long," a fair spokeswoman said. "It was the biggest day of the fair, with 57,000 attending throughout the day."

The return of fireworks, big-name concerts and the inaugural season of Oak Tree horse racing combined to attract the largest crowds ever from throughout the Bay Area.

"But with the ever-increasing crowds on the holiday (and after last year's melee), we made the decision in conjunction with the sheriff to make sure we never go back to the reputation the fair acquired some 20 years ago when we had that shooting," Hoban said.

"We're just taking this extra precaution so as not to tarnish our reputation again," he explained. "It's not worth one unbelievable night of business to ruin a reputation."

Although the live Fourth of July fireworks show has ended, the fair will continue to offer a pyrotechnical show every other night after dark.

Hoban also told the chamber forum that the fair, which began in 1859 in downtown Oakland as a floral event and moved to Pleasanton as the first county fair in 1912, is undertaking major improvements on its 270 acres of fairgrounds.

A new community Youth Barn is under construction to serve youths interested in raising animals for the Junior Livestock Show held at the annual fair. The amphitheater will be expanded with more seats and a new backstage complex with major video components. Some of the older exhibit halls will eventually be replaced.

Most significantly, Hoban announced that the Alameda County Fair Association board, which oversees the fairgrounds, voted earlier this month to seek a developer to build and operate an upscale branded hotel and convention center on a 5-7-acre parcel on the fairgrounds, facing Valley Avenue near Bernal.

Hoban told the chamber forum that the new complex would be under the jurisdiction of the city of Pleasanton and would serve the needs of the thousands of participants and visitors to fairgrounds events, including the Goodguys car show and other special events.

He said the hotel would add to other related businesses on the property, including an off-track betting facility, RV storage, RV campgrounds, a nine-hole golf course and driving range and a racehorse training facility.