I’ve been on a bit of a hiatus – the primaries were essentially over, polling meaningless, and I’d expressed what I thought might be interesting. The press has been in its stuporficial mode, cranking out meaningless me-toos, in which false equivalences have been the theme of-choice. Maybe those’ll stop for a while, now that Mr. Trump’s pungent emanations have separated him from most of humanity and the Republican Party, too -- thus embarrassing even all those “he’s not Really THAT Bad” apologists. Yes, he is -- every bit that bad.

There have been a few things I almost wrote about – I’ll condense them here.

1 – the ongoing saga of billionaire Peter Thiel v. Gawker gives me the creeps, and some concern as well. Thiel has been secretly funding lawsuits against the online gossip-monger, based on prior coverage he considered unflattering. He hit the jackpot in a complaint ostensibly brought by wrassler Hulk Hogan, where a jury awarded $140M for breach of privacy in publishing a sex tape he had made. Gawker has filed for bankruptcy protection, pending its appeal.

Now, uber-trashy Gawker is hardly a sympathetic victim, but to me litigation is a social safety valve—a last resort that shields folks from the bad behavior of others. I have difficulty with its use as a sword to inflict ulterior damage that’s independent of the claims made: thus indulging the vindictive hobby of an underwriter who is Midas-rich. It perverts the process, and discourages settlement because exacting the trial expenses is a big point of the suit. The fact that it’s been done in secret suggests that Thiel, a Stanford law grad and PayPal founder, understands it to be unsavory, at best.

The problem is that it’s difficult to craft an effective solution. A ban on third-party funding would eliminate lawsuits by advocacy organizations of all stripes, whose pursuit is not at all ulterior. You could also make a good argument that most plaintiff’s cases brought under contingent fee arrangements are essentially funded by others.

Upfront disclosure might also subvert the jury’s role in calculating damages. For instance, if, as a juror I thought that I’d wasted several weeks of my life indulging some rich guy’s destructive whim, I might be inclined to award $1, regardless of the actual injury (it does amaze me that anyone thought publicity hound Hogan could have been damaged by the intrusion – Erin Andrews he ain’t. Perhaps it was because he was demonstrably caught in previously, uh, stretching the truth?). Besides, my friend the litigator assures me that spite suits are a staple of the trials business.

Still, the Founding Fathers imposed safeguards to cover situations in which the full weight of the government’s resources was brought to bear against an individual. Where these new Masters of the Universe similarly enjoy essentially unlimited wealth, we need to craft a solution that maintains the baseline integrity of the legal system. Any ideas?

2 – I’ve been in Vermont, welcoming a new member of the family – my first grandchild. I am struck once again by the richness and attachments of community life there in Bernie-land, in contrast to my sense of our relative isolation from each other around here. On the road at 7 AM, I saw four-or-five vested and stop-signed crossing guards emerging nearly simultaneously from their various houses to tend their neighborhood flock of schoolkids. It’s an image of volunteer Americana that I won’t soon forget.

I also better understand the role of seasons in creating a scarcity that encourages rich, full lives. Not only are there things that Must be done now in preparation for each coming season, but when summer will be over in a few short months of highly variable weather, you better also do what you Want to do with some urgency. I get the appeal, and know why my kid has chosen this beautiful locale in a manageable and well-managed state to stake her life’s claim. We could use more of what they have, methinks.

3 – following up my prior blog, my boy dog ‘stayed thirsty’ to the end that came last week. Tuxie had a few very good months (longer in dog years!), in which he careened around in his tri-pod cart and inspired others to the point where we were hopefully arranging for him to become a therapy-by-example dog. Self-pity was not in his lexicon, but cancer lurked in his lungs. It moved very fast despite chemo – he barked at us to go to the park on Saturday, but by the next Wednesday night his hopeless gaze told us he was done. He lived fully for fourteen years, and left us peacefully and well. 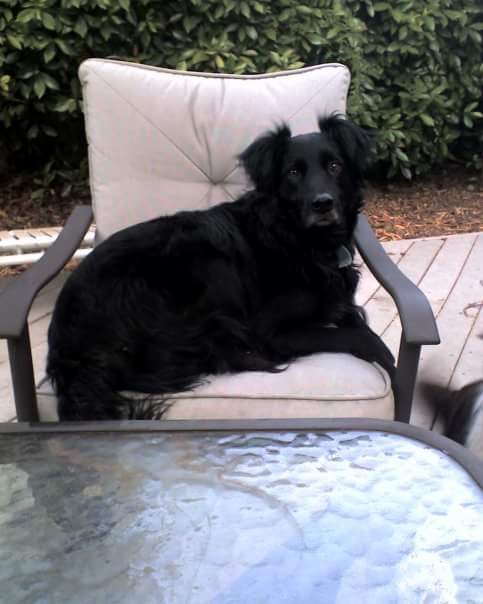 There’s a difference between sadness and regret. I will miss that boy forever, but it is comforting after a fashion to know we did everything we could. Those last months when he needed us particularly deepened our love and admiration for him. And then we just need to accept the outcome. There are still the stabs of recognition when I hear a sound in the house that I know is him – but it isn’t, or prepare to step over him in the hall, except it’s just a shadow. Those things are just the price of loving, though, and well-worth-it in tribute to that enduring affection. I wouldn’t trade ‘em, and there’ll be more pups in my future.

I’m very grateful that he was my fascinating companion for all those years. Rest easy, good friend – see you at the bridge.