I was shopping at Nob Hill last Saturday, wearing my "Read the San Ramon Observer in the San Ramon Express" t-shirt, when a man, who did not want his name or title used, came over and asked if I was a newspaper reporter.

I said I write a blog for the online San Ramon Express. He told me that Redwood trees in the park below the Walmart shopping center are dying from salt in the recycled water. He said he called the Parks Department and they were not going to do anything about.

I thought I should check this out for myself. So on Sunday, May 18th, I drove down to Richard Fahey Park, which is the one on the Dublin border that the man described, and took some photos of the redwood trees. I don't know much about trees, but these did not look good. 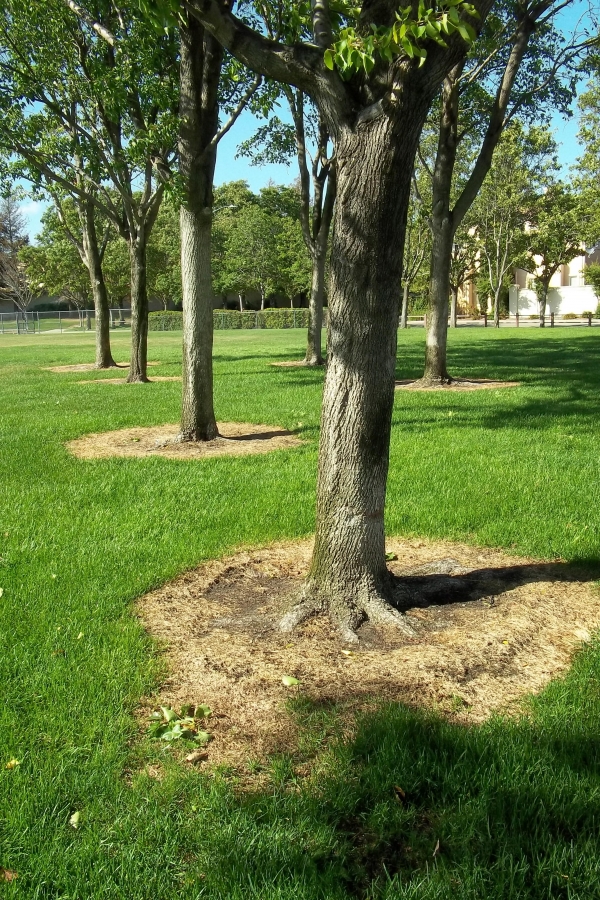 On Monday I called Sue Stephenson at the Dublin San Ramon Services District (DSRSD) to ask about the status of the James B. Kohnen Scholarship. She received only one entry again this year. I asked Sue about salt in the recycled water. She said there is.

I asked if that could be killing redwood trees. She didn't know. She said to call Alden Lane Nursery in Livermore and ask a horticulturist which plants or trees can use recycled water and which should not.

I thought the parks maintenance people should know this and wondered why they were using recycled water if it was harming the redwoods. So I called Glenn Sautter, Parks & Landscaping Maintenance Program Manager and left a message. He didn't return my call, so I called Jeff Gault, Maintenance Operations Division Manager.

Gault told me that the salt in the water wouldn't be a problem if we had more rain, because the rain would wash away the salt residue. But we are in a drought now and it hasn't rained in weeks. So that's why the City is using more recycled water.

Gault made a presentation at the Policy Committee meeting on May 21st on "City Standards for Pesticides and Chemical Use for Landscaping and Weed Abatement." Harry Sachs commented on it when I interviewed him for my last blog

Gault told Policy Committee members, Harry Sachs and Dave Hudson, that redwood trees in the parks were suffering from salt in the recycled water. To treat this they would add organic material to the soil around the trees. However, the heavy clay soil in this area might keep the fertilizer from getting down into the soil.

Gault told me they could clean the salt from the recycled water with an on-site, sulfur burner. The one in the link above is small and inexpensive, but I don't know if this is what he meant.

I didn't ask Harry if this item would be on an upcoming City Council Agenda, but since the Policy Committee sets the meeting agenda that's probably why item was on the Committee's agenda. So to the anonymous man at Nob Hill, the City knows about the dying redwoods and is working on a solution to keep them alive.