I sent my mother a Mother's Day card over the weekend, but don't expect this blog to be a sappy paean to my mother or mothers in general. Our relationship isn't at the warm, fuzzy level.

My mother, and she's always referred to as "mother," and not "mom," or "mama," or "ma," or "mommy," turned 98 in January. She lives in a very nice, upscale retirement community in Scarborough, Maine. She moved from Palm Beach, Florida to Maine to be near my brother and his sons.

My brother Martin is a Law Professor and Associate Dean at the University of Southern Maine in Portland. He and my Sister-in-Law, Linda, are able to visit mother regularly and chauffeur her around to family functions at their home in Portland or their oldest son's home in Freeport.

I visited them last fall in Freeport and took some photos of mother and other family members. I'm posting one of mother taking her teeth out, which is very unusual for her. She lost her front teeth in 1930 when she was 16. I never saw her take out the bridge until last year. 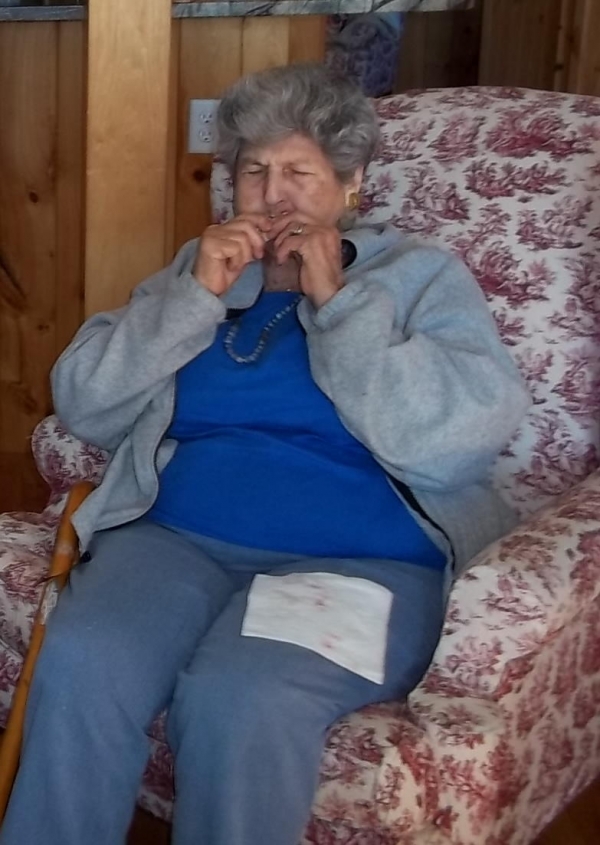 Mother used to be very concerned about fitting in and looking perfect. She has a weight problem and yo-yoed the same 40 lbs. from 140 to 180 and back again for over 40 years. She always wanted to look stylish and proper for every event.

She wanted me to be socially perfect too, and I'm not nor do I want to be. Her idea of being perfect was to meet all of the societal standards of the day. For example she used to think she was tall. She was actually 5'4" which is average height even during the 1930s, but she would not date any man less than 5'10. In those days the woman was always supposed to be shorter and younger than her date. My father was 5'10" and about 5 years older than mother.

Mother always found something to criticize me about ? my hair, my weight, my income, my clothes. Now that she's losing her eyesight to Age Related Macular Degeneration (AMD), she doesn't see well enough to comment on my appearance, but she still criticizes my lack of social interaction and wasteful spending. She's right about the spending. I do need to get that under control.

Mother has some very good qualities. She's generous and gives my brother, sister, and I a tax free gift towards our inheritance every year. She also contributes to many worthwhile causes. I remember many years ago there was a hurricane in Mississippi and she contributed $100 to a relief fund. This was at least 50 years ago when $100 was real money.

She's very good at managing her money. She likes some expensive things like Ferragamo shoes and cashmere sweaters, but having grown up in the Great Depression of the 1930's, she's very frugal most of the time.

A few months ago I was speaking to her on the phone and she said she didn't put her hearing aids on because they made her ears itch. I was having the same problem and bought some ear drops from the Vermont Country Store. I had them send her a bottle too. I didn't consider it expensive at $15.

Well she phoned to tell me I shouldn't have wasted so much money on the ear drops. I thought I was doing a nice thing. She said her Doctor recommended ear drops that cost $3 or $4, and the Vermont Country Store inflates the prices on everything. She's right. I fall for a lot of mail order hype.

Mother had a new pacemaker put in last year. My brother said she had a hard time recovering from the surgery, but when I visited her last September she was fully recovered and trotting around on her rollator like the Energizer Bunny.

Long life is in her genes and mine too I suppose. Her mother, who lived with us, died at 98, but she was frail and had a live-in attendant. Mother's Grandfather lived to be 103 and a Great Aunt in Hungary lived to at least 100. That was in the 1920s and '30s before improvements geriatric medicine and bionic replacement parts.

I'm not going to visit Maine this year. I might go back for mother's 100th birthday in 2016. She was born in January, which isn't the best time to visit Maine. I'll see if she or my brother is planning a celebration for the fall of 2015 or the spring of 2016.