View all posts from Monith Ilavarasan 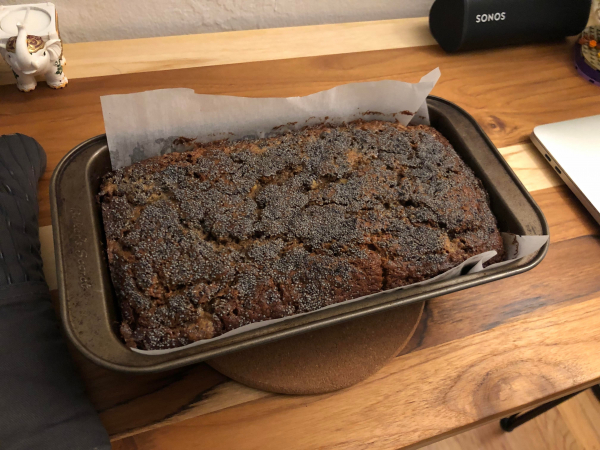 Hey folks, I’m going to try something different with this post. In light of the holiday season I’m going to share a go-to recipe I have for banana bread. As I’ve mentioned before, I got into cooking about six years ago and really got into baking during the pandemic. I’ve come a long way from college where my diet consisted of microwaved chicken nuggets (for protein) & microwaved Costco frozen vegetables (for health).

A few years ago my partner and I were visiting some of her friends in Denver. Her friend's boyfriend at the time (now husband) was a chef at a fancy sushi restaurant and their house was littered with different cookbooks. As my partner and her friend caught up, I picked one up at random and started looking at it. The book was Shaya, by Alon Shaya.

There were many recipes in the book that caught my eye. The chef who wrote that particular cookbook had an interesting combination of Jewish, Eastern European, Italian, and Cajun influence. One particular recipe for banana bread caught my eye, but before I could snap a pic we had to head out. I completely forgot about the recipe after that.

A few months later my birthday arrived and my partner had gotten me that exact cookbook as a present. She said she knew I loved it when I completely stopped contributing to the conversation and just silently read for an hour. It was rude, but at least it gave her a clear idea for a gift.

I immediately wanted to make the banana bread, but the recipe called for some ingredients I had never used before. Those ingredients were labneh, baharat, and orange blossom water. I was fretting about where to find them and asked my mom if she had ever heard of those ingredients. She said to try out Sahara market in Dublin, a nearby middle eastern grocery store.

We drove over to Sahara market on Dublin Blvd. and found all the ingredients listed. If you’ve never been I highly recommend it. In addition to having some hard to find middle eastern ingredients for cheap, they have this amazing long flatbread covered in za’tar that I think is meant to feed an entire family for a week. We got one and polished it off in an afternoon.

Below is a recipe for the banana bread with a few personal modifications. I omitted the orange blossom water as I found the taste a bit too strong and chemical-y for my liking, but please feel free to include it if you want to try it out. I highly recommend finding some baharat, it truly makes all the difference. In a pinch you can use pumpkin pie spice (found at your local Safeway) but it’s more expensive and doesn’t taste as good in my opinion.

The original recipe was a bit scant on instructions. I added some more detail based on my past experience of making it. I also converted the cup measurements to grams as I found it gave a far more consistent outcome. I recommend using weight measurements, but cup measurements also work in a pinch.

Best of luck and I hope it provides you some comfort over the holidays. Please let me know if you have some favorite recipes (holiday or otherwise) in the comments below or in an email. I would love to add them to my repertoire.

- ¼ teaspoon orange blossom water (these days I leave this out, but worth a try. I actually have a massive bottle still left so shoot me an email if you want to borrow some)

- 4 overripe bananas, roughly mashed (the more overripe the better to be honest) 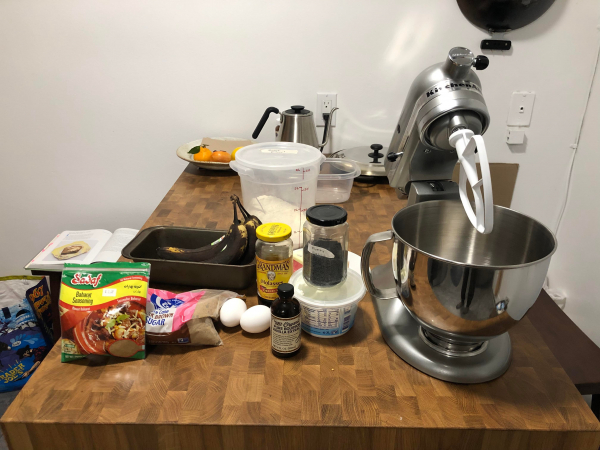 2. Whisk together the flour, baharat, 1 tablespoon poppy seeds, baking soda, and salt. Set the mixture aside.

3. In a large bowl, cream one stick of butter with the brown sugar. For this step you can use a stand mixer (preferred) or an electric hand mixer (doable, but harder). You really want to run this for a while, until the mixture becomes smooth, light and loses its graininess. The butter and sugar mixture will change color way more than you think, and it is worth taking some time here to get it right. There’s actually some really cool science behind what happens when you cream butter & sugar together properly.

4. Once the mixture reaches the proper consistency, beat your eggs in one at a time. It is really important you go one at a time, waiting until the first egg is completely incorporated before adding the second one in. Rushing this step will result in the eggs not being properly mixed in.

5. After the eggs have been mixed in, add in your labneh/yogurt, vanilla extract, and orange blossom water(if using). Run the mixer until fully incorporated.
Now you can take the bowl off the mixer or just put away your electric mixer, the rest can be done by hand.

6. At this stage you will stir in the gloopy banana mixture by hand until incorporated. The mixture might look a bit curdled at this stage, but don’t fear. It’ll all even out once the flour is added.

7. Now you’ll want to fold in your dry ingredients. It’s pretty important that you don’t beat or overstir your dry and wet ingredients. Over stirring will cause gluten to develop resulting in a tougher, gummier end product. We’re going for a moist, melt in your mouth feel.
Here I use a folding motion while turning the bowl. This allows me to incorporate the dry and the wet without too much agitation. If you’ve never done it before, this nice British lady explains it better than I do.

8. Now pour the batter into the prepared loaf pan and sprinkle the remaining poppy seeds evenly over the top.

9. Bake for about 1 hour, rotating the pan after 30 minutes. If a knife doesn’t come out clean after then, you’ll want to bake for increments of 3-5 minutes while checking intermittently.

10. Let it cool completely in the pan before removing onto a wire rack.

11. While the cake is cooling, you can whip together the molasses butter.

12. Whip the remaining stick of butter you have with the molasses until it’s light and airy. That’s it, the topping is good to go.

14. It lasts for a few days on the counter (if wrapped well) or a week in the fridge. Unfortunately, it usually finished long before then. Be sure to use slices of bread to barter for who does the dishes.

Some of the best jobs around
By Sherry Listgarten | 4 comments | 2,201 views

People and Relationships Never Stop Being a Work in Progress
By Chandrama Anderson | 1 comment | 1,091 views