Uploaded: Nov 3, 2022
Twenty-one years ago, I had the opportunity to participate in a “once in a lifetime event,” a vertical tasting of 20 years of Concannon Vineyards’ Petite Sirah.
It was organized by wine collector and connoisseur Jim Waltz (a civil engineer by training). Concannon was the first United States winery to bottle Petite Sirah as a varietal, when it had been viewed as a blending wine. Grapes from the 1961 harvest were released in 1964. Back in the days when the Concannon family owned the vineyards, the annual Thanksgiving Weekend tradition was a vertical tasting of six or seven years of Petite Sirah, several vintages still aging in the huge redwood tanks. Modern techniques changed that tradition with most red wines hitting the market within three years.
Last month, Waltz out-did himself by throwing his second “once in a lifetime” event, this time a vertical tasting of 40 vintages of Concannon Petite Sirah. That’s no typo—40 years from the most recent vintage back to 1967. Working with couple of different cork screws, Waltz managed to get them all opened and topped each with a ½-ounce pour to ensure they went around with the 40-50 invited guests. He’s got a climate-controlled storage unit in Livermore that reportedly has 500 to 600 bottles.
Waltz, who started as an engineer at Lawrence Livemore National Lab working with my father, recalls how Jim Concannon was a mentor and a friendly face when he left the lab to hang up his own shingle. He shared that Jim always greeted him with a big smile when they saw each other at the weekly Livermore Rotary meetings. Jim’s wine hobby has a serious side to it—he judges wine contests. The 40 vintages lined up that Saturday evening were a mild challenge compared ranking 100 Cabernet Sauvignons. That’s serious tasting/judging. 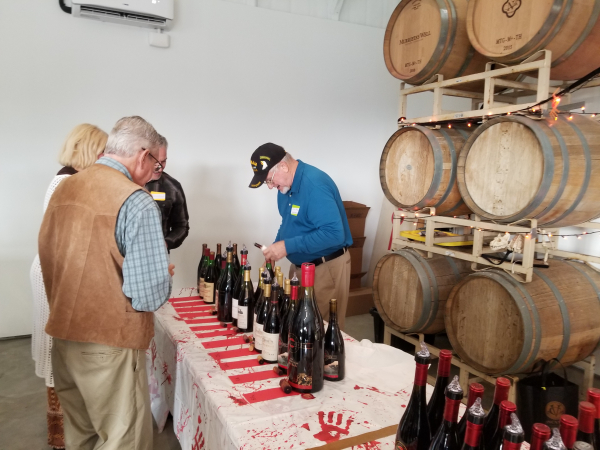 One of his joys is introducing dedicated white wine drinkers to quality red wine—he typically uses Petite Sirah and they become red wine converts.
The Concannon tasting was accompanied by superb lamb kabobs and beef barbecued by grill master John Christman, helped by co-organizer Randy Zumwalt. The event took place in Greg Pelican’s new barn at his home east of Livermore.
A delight for me was sharing the evening with my friends, Jim and Helen Concannon. As Helen commented, we’ve been through a quite bit together in the 40 years we have known each other. Jim, 91, and Helen, 88, have the mobility challenges that often go with aging, but were delighted to engage in conversation.
Their son John, who served as Concannon’s CEO for a number of years before retiring, offered some remarks as well as passing out prints of the historic Cabernet Sauvignon vine. He honored the long-time family friend and retiring Wente employee (49 years over four generations) Julio Covarrubias as well as organizers. 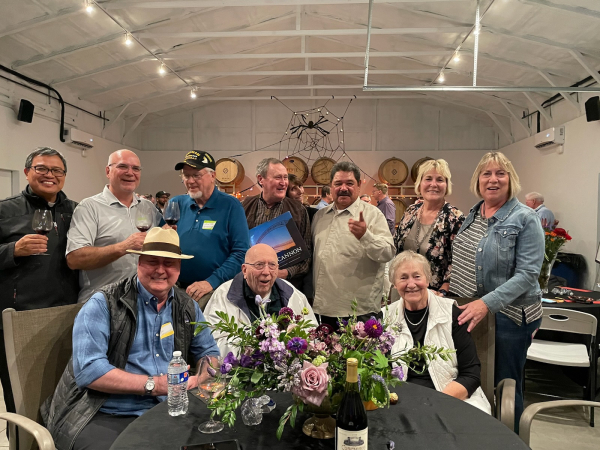 John related how their centennial vintage of 1983 Petite Sirah and their Irish heritage had come to the attention of President Reagan and a staff member called to ask if the president could take a bottle to Ireland as the official gift. Jim set aside a nine-liter bottle (a Salmanazar for those asking) and the Secret Service showed up three weeks later to pick it up. All went well until the officers asked for a second bottle—Jim balked for a minute, until, as John told it, an agent pulled back his jacket exposing a machine gun. They took back two Salmanazar.
The event centered on Petite Sirah, but it’s notable that the Livemore Valley’s two historic wineries, Wente and Concannon, played key roles in the two most popular varietals. Wente’s chardonnay clone is planted in about 75% of the chardonnay vineyards in California and Wente was the first to bottle chardonnay as a varietal, while Concannon’s cabernet sauvignon clones (7 ,8, 11) are growing in about 80% of the variety in the state.

Rich Buckley is a registered user.


I love their wine too.

The Wineries should pay all their own costs, which by implication otherwise fall upon the Voters.


Report Objectionable Content
Posted by Jim Waltz, a resident of Livermore,
on Nov 3, 2022 at 1:24 pm
Jim Waltz is a registered user.

Thank you for an excellent article on our "twice-in-a-lifetime" Concannon Petite Sirah tasting - and tribute to Jim Concannon and his tribe. It took me over 30 years to collect the wines (most of which the winery itself does not have), and I was fearful of never getting this event off the ground after planning for it for decades.

Thanks to the diligent and strenuous efforts of my good friends Randy Zumwalt, Greg Pelican and ("Don") Julio Covarrubias, we finally got it done. Not to mention my Brother Bob, who spent 5 hours with me at my storage unit digging out and organizing the wine. Whew!

More than anything else, having the Livermore/Pleasanton community at large recognize and applaud the most humble, generous and approachable man I have ever known, was well worth all the effort!

Report Objectionable Content
Posted by Greg Pelican, a resident of Livermore,
on Nov 4, 2022 at 10:42 am
Greg Pelican is a registered user.

The atmosphere was charged with such a great crowd. Jim, this was a special event that was only possible because of your generous donation from your wine library. Your appreciation for the history and quality of the flagship wine of the Livermore Valley, The Petite Sirah made this happen.

It was so much fun being part of the celebration Jim.

Thank you Tim for the great article.

my gosh, the John Concannon's Secret Service story was a highlight.

Report Objectionable Content
Posted by Frank Pedrosian, a resident of Walnut Creek,
on Nov 5, 2022 at 11:59 am
Frank Pedrosian is a registered user.


Keep in mind that Sirah and Petite Sirah are two entirely different grape varietals.
(Porion removed because it was pretentious and totally unnecessary.)

Report Objectionable Content
Posted by Grant Richardson, a resident of another community,
on Nov 5, 2022 at 3:48 pm
Grant Richardson is a registered user.


When I think of Livermore wineries, Concannon and Wente Bothers immediately come to mind.

Another winery and I'm not sure if it exists anymore is/was Cresta Blanca. They were known for producing a moderately priced but decent Zinfandel.

Report Objectionable Content
Posted by Lorenzo Bosche, a resident of another community,
on Nov 6, 2022 at 1:15 pm
Lorenzo Bosche is a registered user.


Speaking as an erudite wine connoisseur and graduate of UC Davis (America's true epicenter for viticulture and enology...

Petite Sirah was first bottled as its own varietal by Concannon in 1961. The wines made in these early years were huge, tannic, extracted wines. Some of the better examples like Ridge York Creek, Freemark Abbey, Stags' Leap and David Bruce were thought to be wines capable of aging for 30 or more years.

Therein though was the problem as most consumers don't buy wines to cellar for that long.


"...most consumers don't buy wines to cellar for that long."

This is true among most American wine afficionados. No one wants to wait 25-30 years for a red wine to develop its complexities.

This is why wine merchants charge an arm and a leg for premium vintages. Good restaurants will charge even more.

It is a return on investment for having stored the wine for years/decades sans any immediate profit that could have been realized earlier.

We invest in Bordeaux wine futures while the wines are still in the barrel, several years before official bottled release.

Unless one knows wine this approach can sometimes be a chancy undertaking, dependent upon seasonal variations and the chateau's reputation.


Report Objectionable Content
Posted by Greg Pelican, a resident of Livermore,
on Nov 8, 2022 at 11:00 am
Greg Pelican is a registered user.


Well, the Concannon wines did age well for 40 years and it was a great treat to be able to take the journey through 40 years of how the wines aged. In addition there were various vintages as old as 1967 and were very drinkable.

All the bottles that were opened I only tasted 1 vintage that I would say that the bottle turned. But Jim had back-ups to remedy that.

Would have loved to have a 1961 but I would be asking too much I know. So add Concannon to the list that can age for 40++ years.

Our First Anniversary in my Husband’s Retirement
By Chandrama Anderson | 0 comments | 2,266 views