Uploaded: Apr 14, 2020
When the shelter-in-place order shuttered restaurants other than for takeout and delivery, Garre’ Cafe Chef Abe Ahmari felt he needed to do something for health care workers.

He reached out to the owners, Bob Molinaro and his daughter, Gina Molinaro-Cadera, and they told him to go for it. So, last week Abe and his team started preparing 100 meals daily for health care workers. They’ve partnered with Whitecastle Tours that is delivering the meals to Kaiser facilities around the East Bay. Like the winery, San Ramon-based Whitecastle is a family-owned company.

His suppliers, Sysco and US Foods, both have both helped out with supplies so each worker receives an entrée and a salad. He started out with pasta with meat sauce and Caesar’s salad and prepared a stir fry the next day.

“The bottom line is these people (healthcare workers) really just put their life on the line,” Abe said when we visited on the phone.

There was a different expense than normal—the individual containers for the takeout. The Livermore Chamber of Commerce connected him with Kaiser and set up a GoFundMe page that has hit its goal of $1,500 as of Monday. 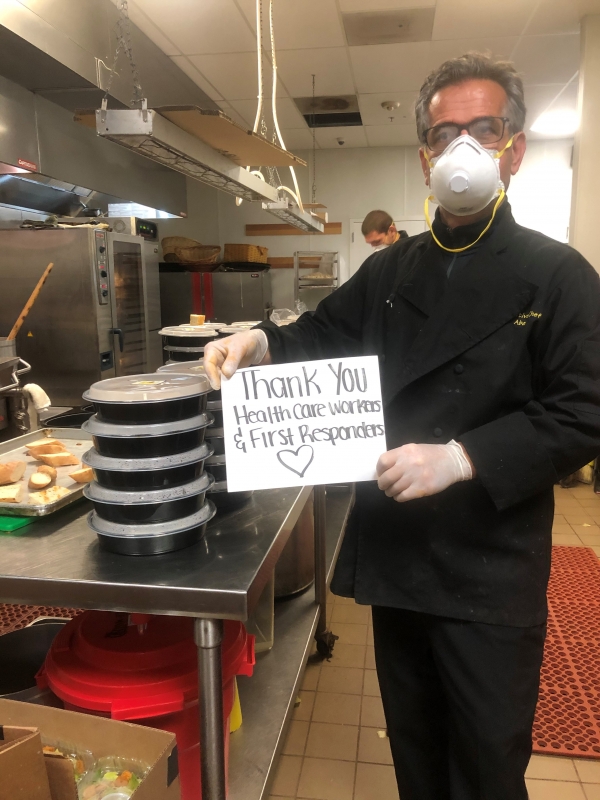 He’s planning to prepare meals six days a week and to continue as long as he can with the support of his suppliers and others. It takes his team between 3 and 3 ½ hours to prepare and pack the meals.

“I’m making sure the quality is still there. Because clearly whatever we do for those folks on the frontline is nothing compared with what they do for us. I wish we could do more,” he said.

He also said he’s grateful for the community’s support of the restaurant, winery and event center.

Incidentally, I reached out to Stanford ValleyCare and was informed the leadership there had decided not to accept any food donations to ensure the health and safety of patients and staff. They recommended supporting the hospital foundation.
Last week, I got up and out earlier than normal to take advantage of the seasoned citizens shopping hours at Costco. Big mistake. The line was huge when I showed up about 7:50 a.m. for the 8 a.m. opening. I left to run other allowable errands and when I returned the line stretched the length of the southside of the building and bent around on the westside in front of the tire bays.

I spotted some friends and emailed them later—it took them an hour to get in the store. What was even more surprising was the two Livermore police cruisers parked near the end of the lines—on guard to ensure that none of the seniors rioted over toilet paper?

Premarital and Couples: Are you Kinder to Strangers than to Your Partner?
By Chandrama Anderson | 0 comments | 2,350 views