﻿ Stepping up to meet the challenge of people who are homeless | Tim Talk | Tim Hunt | PleasantonWeekly.com |

Stepping up to meet the challenge of people who are homeless

Uploaded: Dec 24, 2019
Thanks to the good work of six homebuilders and two churches, working homeless people will have a place to live in Hayward next spring.

The builders, working with HomeAid of Northern California (the charitable arm of the Building Industry Association) partnered with First Presbyterian Church in Hayward and Crosswinds Church in Livermore to construct six “tiny homes.”

The homes were built in Crosswinds’ expansive parking lot south of Interstate 580. After construction was completed, they were loaded on trailers and transported to First Presbyterian Church located on Grove Way in Hayward. The six homes will be finished and installed in the church’s parking lot. The 157-square-foot homes are fully equipped and can house one or two people. The goal is helping residents build up savings so they can move in permanent housing after 18 months.


The church will screen and select residents and operate the program in conjunction with other community partners. Residents will pay $200 monthly to cover utilities and program overhead. It will increase by $200 per month every quarter. By the end of 18 months, church leaders estimate that participants will have about $6,000 toward a rental home.

In a news release from HomeAid, Pastor Jake Medcalf was quoted,” I am beyond thankful to the building industry and especially the builder captains for supporting this project. Each and every person on our planet deserves a home...no matter how big. Together with HomeAid, we are building homes that will change lives.

“As we have gotten to know our neighbors and friends, we have recognized over and over that the road between living in your car and living in a home is a long one and almost an insurmountable feat to overcome,” Medcalf added. “Seventy-five percent of these friends that stay in our parking lot are employed or have a source of income, but they are unable to get on their feet and move into more permanent housing. Adequate and consistent housing is important for people and connects to stability in jobs, schools, services and community assets, which will contribute to better health and prosperity.”

Thanks to all who participated, but particularly First Presbyterian for stepping into the gap and developing the program on their campus.

Incidentally, HomeAid built the cottages, the second residence hall and the life center at Shepherd’s Gate in Livermore, the first faith-based organization the organization partnered with. It is also ready to do the buildout of the Shepherd’s Gate Brentwood campus once funds are raised. 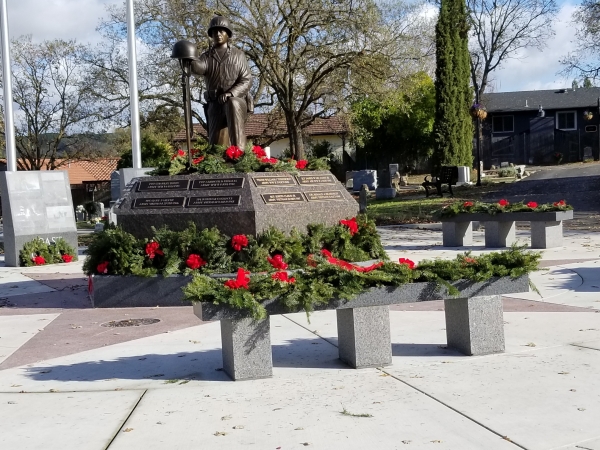 If you want to see a moving and classy way to decorate for the holidays, head to Pleasanton’s two cemeteries on Sunol Boulevard and see the Christmas wreaths that were placed on veterans’ graves. On Dec. 14, about 100 people placed 600 wreaths on the graves and around the veteran’s memorial there.

When I drove through that afternoon, I was struck by just how beautiful the salute is.

According to a press release from Doug Miller, said “the project was organized and led by Venture Crew 937, a co-ed branch of Boy Scouts of America. Numerous local community organizations and businesses contributed to the effort including Veterans of Foreign Wars Post 6298, American Legion Post 237, The Lions Club, Trinity Lutheran Church, Home Depot and numerous Christmas tree sales locations in Pleasanton.”

“The effort to decorate the graves of veterans began in 1992 when a business in Maine send some extra wreaths to Arlington National Cemetery to decorate a small portion of the cemetery. Today the program takes place in all fifty states.”

Does Applying to More Highly Selective Schools Increase Your Chance of Getting Admitted?
By Elizabeth LaScala | 0 comments | 555 views