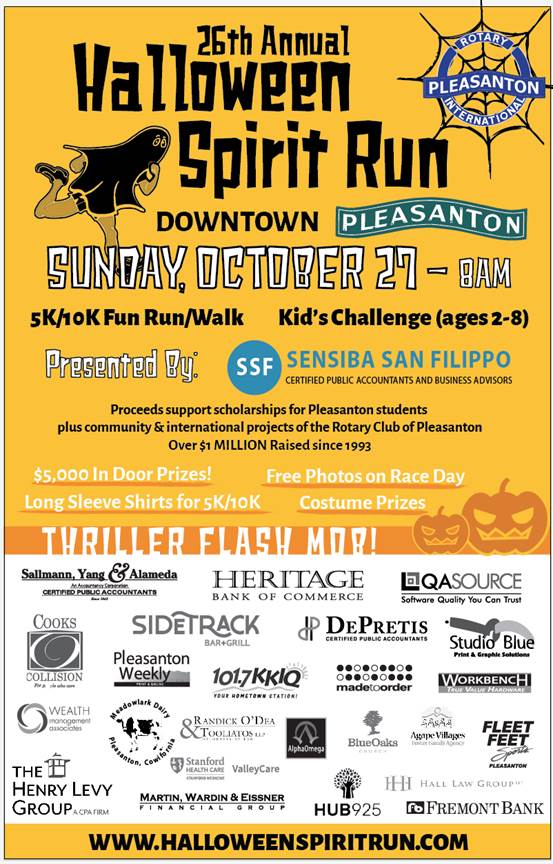 Please join me and my fellow Rotarians at Sunday's 26th annual Spirit Run held on Main Street in downtown Pleasanton.

This event has raised more than $1 million for scholarships benefiting local high school graduates. The run also has funded community grants for dozens of local nonprofits as well as wheelchairs for those in need.

For the past 25 years, the Rotary Club of Pleasanton has hosted the Spirit Run on Father's Day.

We moved it this year to the Sunday before Halloween after the Pleasanton school district switched to an earlier end of the school year, well before Father's Day, meaning our run was deeper into summer break when many families were already on their vacations. In fact, the current school year will end on May 29, 2020, three weeks before Father's Day next year.

We tried holding a second Spirit Run a few years ago during the fall season, but found two runs a year were a bit much. Now, with one big run just days before Halloween and ahead of downtown seasonal festivities, we believe this will be the best time ever for generating the holiday spirit. Even retail stores are already selling Thanksgiving and Christmas goods.

Also, with 25 years of the Father's Day Spirit Run, a fresh change was welcome -- plus Sunday's high temperature is forecast at 74 degrees, mild and certainly cooler than some of those Father's Day mid-June heat waves.

As many as 600 runners (and walkers like me) are expected to participate in this popular event with our children and families participating in the 10K run or 5K walk/run.

The 10K and 5K events will start promptly at 8 a.m., winding through Pleasanton neighborhoods, around the fairgrounds and on trails along the Arroyo del Valle. There also is a Kids' Challenge for those ages 12 and under, including a number of 100-yard dashes on Main Street, finishing right underneath the Arch.

Check-in and on-site registration will be held in the parking lot next to the Workbench True Value Hardware store at 652 Main St. starting at 6:45 a.m. Race-day registration fees are $48 for those 18 years old and older, $5 less for youth under 18 years old and $15 for the Kids' Challenge. A special rate of $130 is available for families of four with an additional fee of $30 for each family member over four.

All entries are non-refundable and non-transferable. Proceeds from the run not only support scholarships for Pleasanton students, but also community and international projects of our Rotary Club.

The Pleasanton Weekly is a longtime sponsor the Rotary Club's Spirit Run, along with a number of others, including title sponsor Sensiba San Filippo. For a list of sponsors, sign on to http://halloweenspiritrun.com/