Happy retirements to Vic and Rick 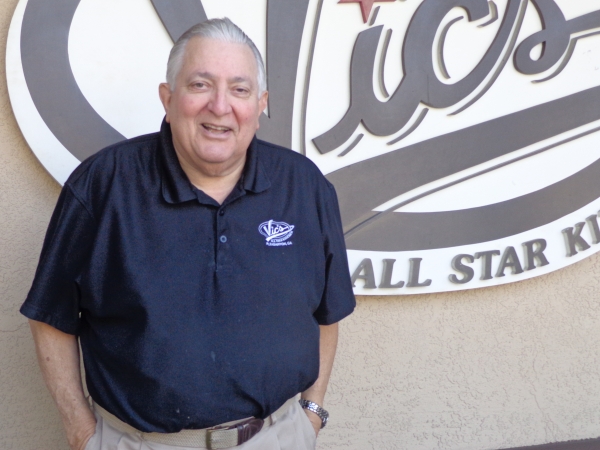 Rick's Picks, a popular retail store at one end of Main Street downtown, will close after Christmas, and Vic's All Star Kitchen, a restaurant that has anchored the south end of Main Street for the last 26 years, may have found a new owner.

For years, Vic Malatesta (pictured above), who is now retiring, has delivered a starry mix of American food, fast service and a bustling, cheery atmosphere. He has teamed his love of sports with his passion for good food to create a solid dining experience with a local sports theme. The walls of his 155-seat restaurant are adorned with photos of teams from Foothill and Amador Valley high schools for that last two decades.

For 33 years, he has also been a part of the chain gang at Foothill home football games, one in a group tasked with staffing the first-down markers and chains along the visitors' sideline.

The menu features specials named for coaches of both schools and a banquet room is even called "The Coaches' Room."

Vic, who comes from a family of chefs and restaurant owners, is selling his namesake restaurant "to head outside and enjoy some fresh air" while he can. Now 74, he's endured a triple heart bypass, had both knees replaced and had back and cataract surgery.

He's had a remarkable career. He served two years in the Navy, including in Vietnam. After college, he worked at and managed a number of restaurants, was beverage director for Holiday Inn, food service director at Chevron and a district manager for Taco Bell.

In 1994, Vic bought the Town House Coffee Shop at 201 Main St. "It's been a love story with Pleasanton ever since," he said.

The prospective new but yet unidentified owner has indicated that he will upgrade Vic's All Star Kitchen, but keep it much as it is, a restaurant a the southern gateway to downtown Pleasanton.

Like Vic, although younger at 58 years old, Rick Hirshberg has also decided that it's time to take a break after nearly four decades of operating retail businesses.

He closed his Rick's Picks store on Hartz Avenue in Danville three years ago after a 12-year run. After 16 years in Pleasanton, Rick's Picks at 719 Main St. is closing, too. A liquidation sale is now underway.

Rick is originally from Boston. He began to work in retail soon after graduating from the University of Vermont, and learned about deep discount retailing working for Towle Silversmith while managing its eight factory outlet stores in the Northeast.

He earned his MBA at Boston University, then his wife Rene, who is from Monterey, persuaded him to move to California in 1991. They first lived in San Francisco and Rick opened an outlet store in Vacaville called Silver and More. He added stores in Gilroy and Milpitas, but after 10 years began winding down those businesses to partake in the dot-com boom, at buylink.com.

Rick was living in Danville when he spotted the vacant storefront on Hartz. He told Dolores Fox Ciardelli, Pleasanton Weekly's features editor: "I always wanted to open a store like this. The timing was right. The store was available and I could always get the product."

After 36 years in retail, the time is right for Rick to retire and close his remaining store in downtown Pleasanton.

Rick said luckily Rene grew up with a father in retail so she understood the long hours. But now, like him, she probably won't miss them either.