Paying it forward by mentoring

Uploaded: Oct 3, 2019
When it comes to touching lives of businesspeople, Joe Cristiano of Pleasanton may have reached more entrepreneurs one-on-one than anyone I know of or have met.
Certainly, professional speakers or authors have reached thousands or more through their mediums, but you can find Joe’s fingerprints on owners and their businesses throughout the Bay Area. His Northern California Mentoring Group has involved 453 people over the last 16 years and he’s never advertised or recruited people—it’s all word of mouth. 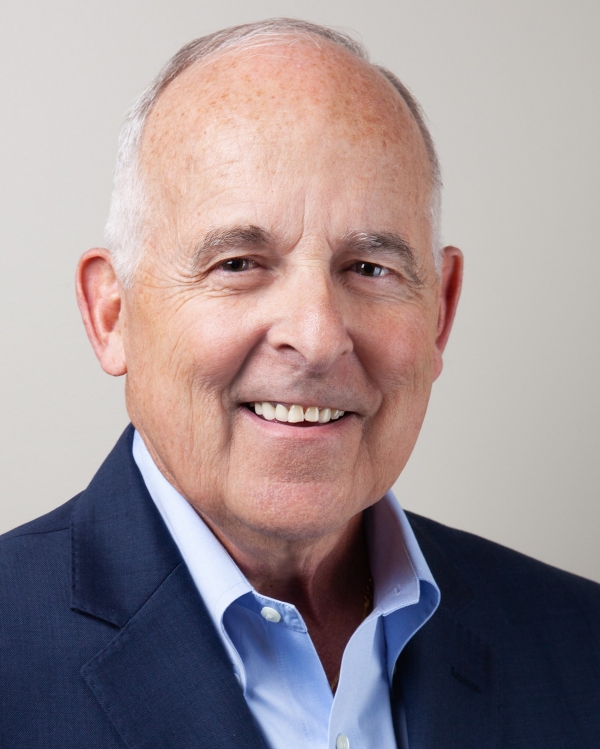 He started the group after retiring from Kelly Moore Paint after 45 years in the business starting as a stock boy and rising to president and CEO. He spent 23 years with Sherwin Williams, the largest paint company in the world, running its national sales before being recruited as president of Kelly Moore. His mission was to grow the regional paint company. Mission accomplished over 16 years: revenues quadrupled as the store footprint grew to cover the West Coast.
The mentoring group was one of Joe’s three core activities after retiring. He launched a paint consulting paint business with clients across North America and in Europe at its height; served as chairman of the board of the Bank of San Francisco and launched the mentoring group after a humble start as an adult education class in the Pleasanton school district. He laughed that the mentoring business—which he does for free—has soared while the paid consulting business has been a bit slower.
Joe recalled that “he almost cried” after the first night of the entrepreneur class when only four guys showed up: Kevin Comerford (who he already knew), Joe Rodriguez from Valley Catering, Mike Vincent from the tech world and Jeff DeBernardi of DeBernardi Development. After the scheduled classes were finished, the guys asked if they could keep meeting. They did so monthly in the backroom of Roman’s coffee shop at Angela and Main.
That’s grown into meetings with 50 or more at Service Champions, the company Comerford co-founded and grew with Joe’s guidance. When I attended the monthly meeting last month, both Kevin and Joe were there, starting their 17th year.
Joe stays quite busy with the mentoring. He counted the one-on-one meetings he held in May—29 one-hour meetings. That’s in addition to his consulting business, serving on the boards of the bank and Dunn-Edwards Nippon paint. As a member of the Dunn-Edwards board, he negotiated the merger of the two firms.
When asked why he runs the mentoring group and invests lots of his time, he wrote, ““My 45+ year business career was blessed with hundreds of very special individuals at all levels who coached, constructively criticized, mentored, motivated, encouraged and assisted me in climbing the ladder of success from a stock boy in a small paint store to CEO and President. I always felt that when I eventually achieved my goals and was in a position to repay them, I would pay it forward by helping others as they had helped and guided me.

“Once I became involved in mentoring, I realized that this was the best path to achieve this objective. Along with that came the realization of the pure joy I was receiving personally when I helped another mentee achieve what they were capable of while asking for nothing in return. 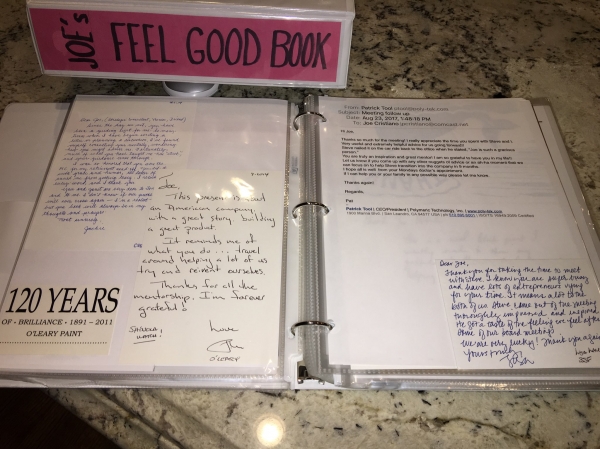 “Their personal messages and thank you notes has helped fill my “Joe Feel Good Book” and that is all the payment or reward I ever needed!”

The mentee that has known Joe the longest is Comerford who met him while dating his daughter, Gina Piper (the well-known Pleasanton Realtor), while they were both attending Cal Poly San Luis Obispo. After graduating, Kevin came home and joined his parents’ heating and air conditioning business as general manager. He reached out to Joe and asked if he could come visit him at Kelly Moore’s headquarters and plant in San Carlos.

Kevin said he went expecting to learn how to run a $400 million business, instead he got a lesson in working with people. Joe took him on a tour of the plant and Kevin was blown away to see how much Joe knew about each employee. When they got back to Joe’s office, his secretary had a box of 3x5 cards waiting—one for each employee where Joe kept notes on what he had learned.

Joe recalled, “He was a cocky kid. I convinced him that his real mission should be to show his people he cares for them.”
Kevin is writing a book and his first chapter is devoted this story and what he learned from Joe. In the lobby of his business, there’s a free library for employees to broaden their education and skills. Reading—life-long learning—is a key mentoring principle for Joe.
In the heating business, Kevin made another key innovation at Joe’s suggestion. Joe said that heating salesmen were like used car salesmen when it came to credibility. Everyone says you need a new heat exchanger. Comerford solved this issue by getting a small camera that could take photographs inside the heater and show the customer what was happening. Game changer.
Joe related the story about one attorney in his group who really didn’t like being an attorney. Instead, with Joe’s encouragement, he bought a dog walking business in San Francisco and made it the largest in the City in two years. A key customer service benefit was artificial grass mats, cut to balcony size so the dogs could do their duty. His walkers came and changed them when they walked the dogs—adding new revenue. He routinely drove from San Francisco to attend the monthly meetings while building his company.

The monthly meetings range from bringing in guest speakers—Joe has attracted many of them-- to round-table discussions of that month’s books or a business challenge faced by one of the members. Joe recalled one meeting at the Chamber of Commerce’s offices where more and more people kept pouring into the room and the lobby to hear the speaker. Turned out that the speaker, a co-inventor of Twitter, was speaking and an attendee was tweeting out that he was speaking and there was no charge.

The speakers, like Joe, are all volunteers. He jokes they get paid exactly what he does.

Cristiano said one of his key roles is holding the mentees accountable. They leave each meeting with three to five goals to accomplish over the next month. Miss them and Joe is disappointed—not an emotion a mentee wants to experience.

Matt Richert, who has taken over operating Richert Lumber Ace Hardware from his dad and company founder, Tom, recalls how he hit all of his goals but one. He’d delegated that one to his dad who didn’t get it done. Joe’s reaction—delegated to the wrong person. Matt was responsible.

That fits with the tagline on Joe’s email signature: “Friends love you the way you are; Great mentors love you too much to leave you that way.”


Joe...Thank You for you many Good Deeds! America needs more citizens like you! Gracias!

Repairing a Disagreement with your Beloved & “Physical” vs. “Social” Distancing
By Chandrama Anderson | 0 comments | 1,218 views