City unions' benefit helps cancer-stricken colleagues who are getting better 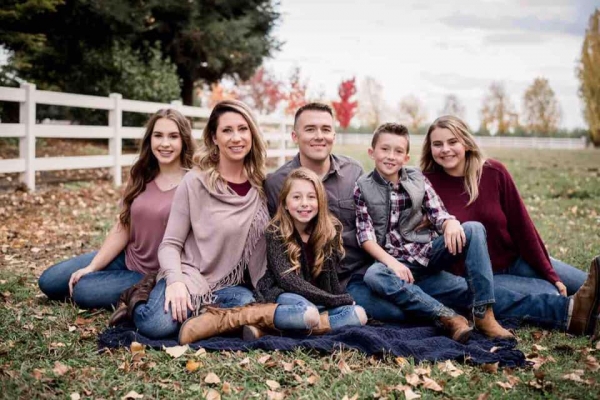 Donations from the dinner, which are being tallied, will go to funding mechanisms set up to help Ben Jacobs and Kyle Henricksen, who is pictured above with his wife Jennifer and their children: Destani, 19; Alyssa, 18; Zoey, 12, and Cohen, 10.

Henricksen, a 36 year old Pleasanton Police Officer, is being treated for pancreatic cancer. Jacobs, 37, is a water distribution operator in the city’s utilities division, who started receiving chemotherapy for blood cancer in April.

The Pleasanton Police Association has held other fundraisers for Kyle, including one last November when he was diagnosed with Stage 4 pancreatic cancer that had metastasized to his stomach lining. That online rally raised $75,000 in a week’s time as Kyle moved his treatment to a self-pay basis at Stanford Medical Center when Kaiser Permanente, his insurer, said it could not handle the treatment needed.

Neither Kyle nor Ben were able to leave their hospital beds to attend the benefit at the Senior Center where both were toasted with wishes of speedy recoveries. Nicole Jacobs was there with Ben’s mother Christy Jacobs to represent her husband and thank supporters. Kyle’s wife Jennifer had planned to drive in from their home in Manteca, but Kyle’s precarious condition kept her with him at Sutter Memorial Hospital in Modesto, where at the time he was being treated.

It so happened that as the fundraiser was underway, doctors made the decision to transfer him back to Stanford, which was happening at the time. Now, seven days later, treatment showed that a small obstruction at the bottom of Kyle’s stomach has been causing the obstruction that was causing pain and making it difficult for him to eat. It was also the cause of a delay in cancer treatments.

A CT scan showed there were no other obstructions to delay chemotherapy and other medications. Doctors also planned to place an NG tube in Kyle to help relieve accumulating fluids so that he will be able to start eating again.

“Thank you everyone for all your prayers,” Jennifer Henricksen wrote on her Facebook account Tuesday. “We appreciate all the help with the kids and checking on us constantly to make sure we’re good here as well. “We’re so happy to see a light at the end of this tunnel. Now it’s time to get him home and back on treatment.”

I also had a chance to talk to Ben Jacobs by phone from his bed at Stanford Medical Center. His news is also good. Doctors have found that after a recent bone marrow transplant, a biopsy just showed that he is now cancer-free. The long and often uncomfortable series of treatments started last April after doctors at Kaiser Permanente in Antioch diagnosed him with myelodysplastic syndrome (MDS). He was moved to Stanford for the bone marrow surgery.

Nicole and Ben have three children: Brooke, 11; Betsy, 5, and Bruce, 18 months old. Because of the distance from their Brentwood home to Stanford in Palo Alto, Ben hasn’t been seeing the kids as frequently as he’d like, but he’s stayed in contact on FaceTime. His mother Christy cares for the children when Nicole drives the 62 miles to Stanford.

He credits his co-workers in Pleasanton and supporters at the two churches his family attends in Brentwood with the support that gave him the strength to go through the difficult cancer treatments.

“At first, they didn’t think I was going to make it,” he said. “But the good doctors and my faith just kept pushing me. I decided I’m not giving up.”

“I put my trust in God,” Jacobs added. “My faith, church and support groups helped me all through this. It’s been truly amazing.”