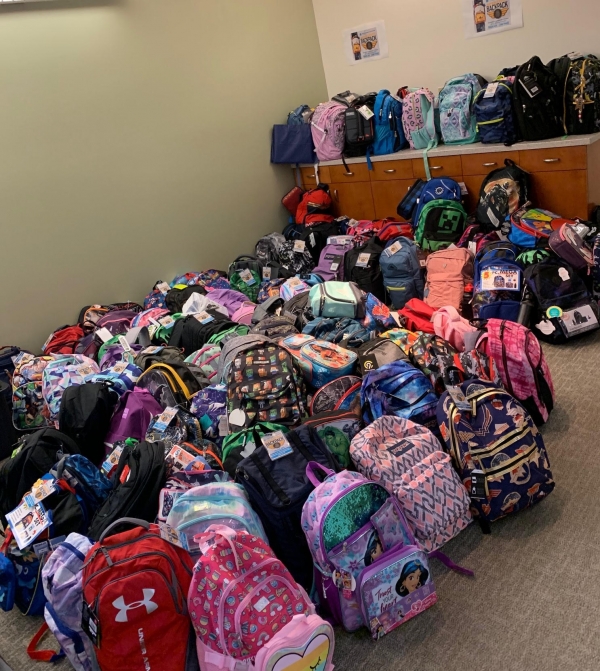 Employees at Sandia National Laboratories joined children from Northern California military families in going back to school last week, or rather the backpacks Sandians prepared did (See photo).

The backpacks were delivered to 55 children at Camp Parks in Dublin, 10 at the 114th Medical Detachment (Minimal Care) in Fresno and another 68 children at Travis Air Force Base in Fairfield. 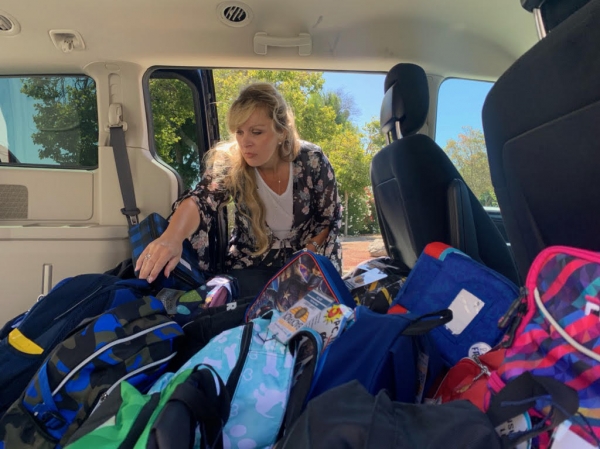 Sandia/California employee Rachel Sowell (pictured), who started the benefit in 2014, said each year she is amazed by the continued support from Sandia’s California workforce.

Originally a Livermore lab-only effort, Operation Backpack has won support over the years from all Sandia operations, including from employees at its headquarters operation in Albuquerque, N.M.

“That has allowed us to reach more families at the various military bases and installations in the Bay Area, meeting the back-to-school needs of military families,” Padilla said.

Added Sowell: “The tremendous support that Operation Backpack has received each year has been a true blessing to the military families in the Bay Area. “For many military families, costs in the back-to-school season can be overwhelming, both financially and emotionally, and especially when one or both parents are actively deployed.”

Travis Air Force Base families who receive backpacks from the Sandia campaign have an even greater need since a larger number of their children have special needs, Sowell explained.

“I have been working closely with Kevin Hamilton at Travis for the past three years now to ensure that Sandia is able to sponsor as many families in the special needs program as we possibly can,” Sowell said. “The support from Operation Backpack means that families can focus their energy on their special-needs children and not worry about the stress and extra financial burden of back-to-school shopping.”

Each year, Sandia volunteers assist with the campaign and deliver the backpacks to the bases and installations. The volunteers are present when the families pick up the school supplies.

“The absolute joy and excitement on children’s faces and, often, the tears in their parents’ eyes when the children receive their individual and customized backpacks cannot be put into words,” Sowell added.

She continued: “The backpacks are typically overstuffed with school supplies and sometimes even a small toy or personalized ‘good luck in the school year’ note from the Sandia sponsor. When the children see their very own backpacks in their favorite colors or characters, their eyes light up like it is Christmas.”

She said that school supplies are gladly accepted from members of the workforce at any time with many donations purchased at clearance sales during the year.

Operation Backpack is one of a number of voluntary campaigns held at Sandia’s Livermore site.

“The need is greater than one can imagine,” Sowell said, adding that she was recently contacted by the Survivor Outreach Services Support and Army Community Service Program Coordinator of Monterey County to see if Operation Backpack will be able to support some families in that area for the next school year.


She is doing a very great job the military kids and very supportive for their family. In the photo many bagpacks are she have. Nice post and very appreciating work. KEep going. Web Link