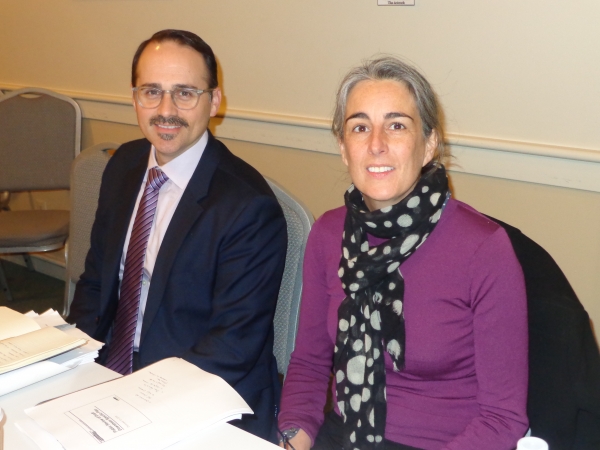 The Downtown Specific Plan Update Task Force will hold its final meeting starting at 6:30 Tuesday night (May 28) in the City Council chamber at the Pleasanton Civic Center, 200 Old Bernal Ave.

Gerry Beaudin, the city’s community development director, and Ellen Clark, planning manager/deputy director (pictured above), the key city staff leaders working with the task force, expect task force members to wrap up a series of policy documents Tuesday. These range from proposed new land use designations for the downtown district to site development recommendations for the current city hall, civic center and police headquarters should voters authorize moving those facilities to new buildings on Bernal Community Park on the other side of Bernal Avenue.

Once completed, the task force recommendations will be incorporated into the Downtown Specific Plan draft update, which currently consists of 138 pages of commentary, two pages of acknowledgments, a five-page list of tables of contents and maps, and 53 pages of appendices. It’s available for review both online at www.ptowndtown.org and at the Planning Department counter in the Pleasanton Civic Center, 200 Old Bernal Ave.

"When we talk about downtown Pleasanton, we usually think of Main Street," Beaudin explained. "But it also includes side streets and more. It's a 319-acre area, covering 60 city blocks. There are about 1,270 homes in the area, and they're not to be forgotten in this process."

In addition to making recommendations for the broad sweep of Pleasanton’s downtown district, the task force, at the council’s direction, must provide a framework on the kinds of development possible on the current 13-acre Civic Center site if all of the municipal facilities there move to Bernal Park.

The council is considering building a new library on a 27-acre, city-owned site in the Bernal Park. The existing Civic Center buildings would then be razed with city offices moved into the old library. Private developers would then be offered a chance to bid for the Civic Center properties, which would pay for the new library.

But before any of this could happen, voters would have to approve these council plans. The downtown task force is being asked to assume voters will buy into the plans and make recommendations for the best use for the Civic Center site once it is vacant.

Task force members received their final policy direction from the City Council on key topic areas relevant to their mission on April 16 and at a continued meeting on May 8. This combined meeting was the council’s third “check-in” on recommendations being advanced by the task force, which has held 17 meetings since launching the downtown plan update Jan. 24, 2017.

In those last meetings, Councilmembers heard from speakers whose comments included outright opposition to any new multi-family residential units downtown to others asking for conservative growth to another urging as many new units as feasible given the housing shortfall.

Tonight’s last task force meeting is open to the public. Once it’s given a final approval, the finished draft document will be updated and then re-released to the public for review ahead of public hearings before the Planning Commission (likely early summer) and City Council (late summer or fall), according to city staff.