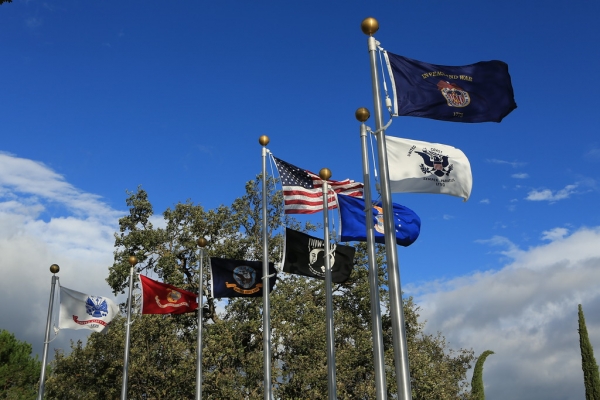 Pleasanton's annual Memorial Day observance will be held starting at 11 a.m. Monday in the garden area just south of the Pleasanton Senior Center on Sunol Boulevard. The Pleasanton Community Concert Band, under the direction of Bob Williams, will play patriotic music before, during and after of the ceremony.

This year, the organizations also will pay tribute to Navy veteran Rene Lavigne, a longtime member of both groups who died last March 3. He was a fixture in the veterans’ community. Rene and I both served in Korea and became good friends through veterans’ activities we shared in Pleasanton. He would have turned 82 next Thursday.

Rabbi Laurence Milder of Congregation Beth Emek in Pleasanton will open the ceremony with an invocation, followed by Legion commander Bill Danko and VFW Post Commander David Caldwell who will give welcoming addresses.

Then the Legion color guard will present the colors, followed by the "Pledge of Allegiance."

Lt. Colonel Jennifer Nolan, garrison commander at Camp Parks in Dublin, will be the keynote speaker. Most recently the chief of strategy for the U.S. Southern Army Command in Miami, she will address the sacrifices the country's military has made through the years and will also talk about the future of the military.

Nolan holds a degree in Biology from LaSalle University, a Master’s degree in International Business from Trident University International and a Master of Military Art and Science degree from the School of Advanced Military Studies at Fort Leavenworth, Kansas.

After a three-round gun salute to veterans, Nolan’s address will be followed by the traditional reading of the Honor Roll of Silence. Rene often joined in these readings. This year, his name will be read along with a poem written in his memory.

The Honor Roll honors the more than 500 veterans buried at Pioneer Cemetery, which was established early in the 1800s as Memorial Gardens and contains the remains of many Pleasanton area pioneers and some who died much more recently that many of us knew.

This will be followed by the playing of Taps, the Laying of the Wreath, a bagpipe rendition of “Amazing Grace” and a benediction by Rabbi Milder.

The ceremony will last approximately 90 minutes.

Memorial Day, now observed as a holiday on the last Monday of May, honors the men and women who died while serving in the U.S. military. Known as Decoration Day early on, it originated in the years following the Civil War and became an official federal holiday in 1971.

In Pleasanton, it has also become a day when many visit the adjoining Pioneer and St. Augustine's cemeteries not far from the Senior Center and to pay special tribute to soldiers buried there at the Veterans Memorial. Completed in 2016, the memorial was developed as a partnership between the city of Pleasanton and the local posts of the Veterans of Foreign Wars and American Legion.