View all posts from Pleasantonweekly.com

Uploaded: May 23, 2019
At a time when many country clubs are struggling with shrinking membership, the Diablo Country Club membership has undertaken a $31 million investment in the Tri-Valley's oldest country club.

Located within the historic community of Diablo, the club is under construction on the first phase of a four-phase master plan designed to set the club up for success over the coming decades.

Currently, the historic golf course is being completely renovated. The front nine was designed by Jack Neville, whose next job was creating Pebble Beach Golf Links. The second nine was done by Willie Watson who went on from there to design the Olympic Club's courses and TPC Harding Park in Daly City.

Diablo general manager Frank Cordeiro pointed out the Diablo designers work will be featured at June's U.S. Open at Pebble, while the PGA moves to the Harding Park in 2020. Diablo's course is the only golf course with nines by the famed designers and has maintained its traditional routing.

Golf course renovations include new tees, greens, bunkers and replacing the grass on the greens, fairways and rough with Bermuda. Drought-resistant fescue will be planted in perimeter areas. The fairways also are being widened and sand-capped to improve drainage. Closely mown chipping areas are being added around some greens and most greens will be enlarged a bit to create more pin positions.

One goal is reducing overall water usage. The fourth phase of the master plan is to develop a small water treatment plant to produce recycled water for irrigation.

While the renovation is underway, the management team is striving to keep nine holes open. The course will close completely in June and July to allow fairways and other areas to grow in (greens are growing in now). The course is scheduled to reopen all 18 holes by the end of the year. The plan also includes improved practice and dual-use fairways that also can serve as a driving range. Currently, golfers warm up by hitting into nets. 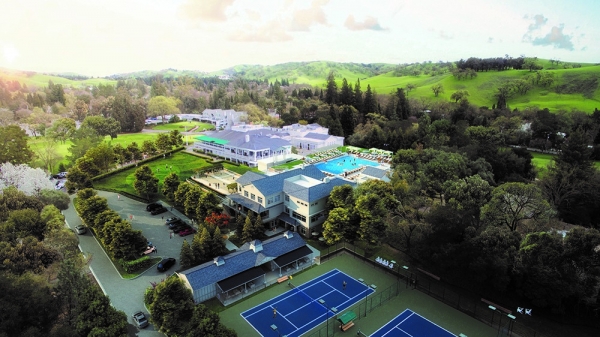 Construction is scheduled to start in spring 2020 on a three-story, 15,000-square-foot "Family Activity and Wellness Center" next to the swimming pool. A stand-alone building next to it will feature a state-of-the-art golf training and fitting center with four simulator bays plus a putting simulator (similar to the one used on Golf Channel).

The top floor will house the fitness center, while the second story will have a casual restaurant with an exhibition kitchen including a wood-fired pizza oven. The architecture will complement the original clubhouse with a wrap-around terrace and an indoor/outdoor bar. New additions are massage treatment rooms, child care, teen center and rooms for fitness classes.

The bottom floor will be the tennis pro shop, lounge, locker rooms administrative officers and a grab-and-go convenience store for the members. Adjoining it will be two regulation bocce ball courts.

Once the new facility is completed, the club will then undertake remodeling and renovating the historic main clubhouse. That includes repurposing the Carriage Lounge as a gourmet coffee shop during the day, while continuing as a cocktail lounge in the evening.

"The club deserves this investment and it will position it for the next 50 to 100 years," Cordeiro said. "This is the only club in the area with this type of history and a golf course that differentiates. Once this is completed, it will be a resort-like experience for members and families."

The club has 436 equity members and another 400 social members, he said. They voted to make the significant investment in the private club.

Diablo dates to its founding in 1914 by Robert Noble Burgess who bought the land from the Big Four (Charles Crocker, Leland Stanford, Collis Huntington and Mark Hopkins). His early club attracted some of San Francisco's wealthiest residents.

That same year, John and Joann Smith moved to Diablo from Carnoustie, Scotland to manage the golf club. All five of their sons played professional golf and three generations of Smiths were pros at Diablo. The club maintains a sister-club relationship with Carnoustie to this day -- the Diablo logo is displayed in the trophy case of the Scotland club and Carnoustie's plaid decorates the men's locker room.


Lately I've been hooked on watching golf on TV. I even cheered when Tiger Woods won the Masters. I'm not sure if any major tournaments are held on local golf courses here, but a renovated Diablo Mountain Golf Course would probably make a great site for the PGA tour. I hope to be able to see some of these really great professional golfers on a local golf course in the near future.


I was working and suddenly I visits your site frequently and recommended it to me to read also. The writing style is superior and the content is relevant. Thanks for the insight you provide the readers!
Web Link

The Readers' Choice ballot is here

It's time to decide what local business is worthy of the title "Pleasanton Weekly Readers' Choice" — and you get to decide! Cast your ballot online. Voting ends May 16. Stay tuned for the results in the June 25 issue of the Pleasanton Weekly.