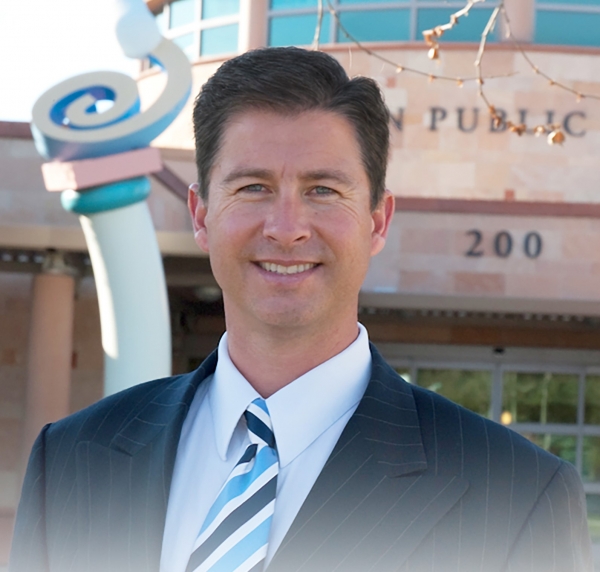 Dublin was recognized by Money Magazine last year as the seventh best city in the U.S. and the very best in California, and Mayor David Haubert (pictured) wants everyone to know that.

“Dublin is a vibrant, active community with excellent choices in housing, shopping and places to work. We have beautiful parks and open spaces, exceptional recreational opportunities, and outstanding neighborhoods,” Haubert said in his two “State of the City” addresses last week. “We truly are blessed to live in such wonderful city. I know we are all proud to call Dublin home.”

Haubert gave his reasons why Dublin is sizzling as a growing economic and family-friendly leader in the Tri-Valley in remarks before a sold-out $45-$55 a plate luncheon April 17 hosted by the Dublin Chamber of Commerce and again that evening in a first free-to-the-public forum. Both events were held at the Shannon Community Center.

“Dublin is a great place to live, work, and raise a family,” Haubert said. “But great places don't just happen by accident and they don't happen overnight. It takes a lot of hard work by a lot of dedicated people to make it all happen.”

He praised the City Council, current civic leaders as well as those who served in earlier years and city staff for their efforts to make Dublin “a great place to live, work and raise a family.”In its selection of Dublin, the Money Magazine article by Max Zahn states that the city, one of the fastest-growing cities in California, “sits among the hills 35 miles east of San Francisco with two stations on the Bay Area's BART system, (offering) commuters easy access to the region's vibrant tech and business ecosystem.”

Zahn wrote: “But there are plenty of events right in town to build community among Dublin's 68,000 residents: a seasonal farmers’ market that doubles as an outdoor concert venue, a spooky flashlight tour at a historic cemetery and an annual St. Patrick’s Day parade that brings out the whole town. Even in the hot summer months, Zahn continued, “Salvation awaits at the Wave, a massive city water park that opened (in 2017).”But that’s not all, Haubert pointed out.

He said the city of Dublin is in a very sound fiscal position. Based on the city’s recent mid-year review of its fiscal 2018-19 budget, revenues are expected to total $92.6, which will be greater than planned due to increases in property taxes, sales taxes and development revenue.

Expenses are projected to total $84.7 million which means Dublin will have a surplus of $7.9 million. The city’s 10-year forecast shows a positive balance through 2027.
Even more impressive, the city is fully-current on its employee pension obligations, unlike neighboring cities that face ongoing pension debts.

In his “State of the City” report, Haubert said Dublin now has more than 2,300 businesses in the city, over 8 million square feet of commercial development, a workforce of than over 30,000 people and a low 2.6% unemployment rate.

Haubert continued: “Dublin offers our residents a food and retail experience that they crave. While many cities are losing business to online retailers, I am proud to tell you that Dublin is ‘Open” for business.”