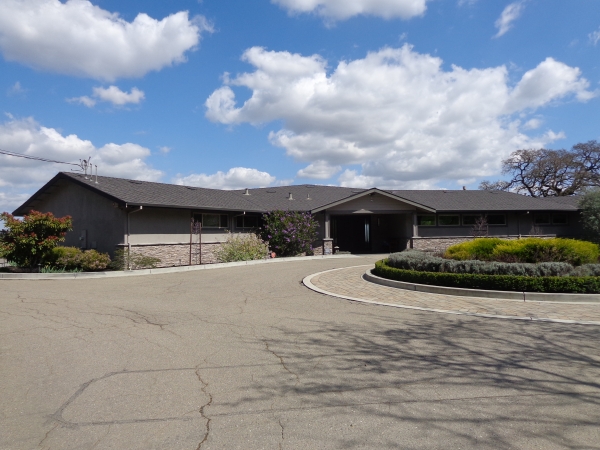 The Pleasanton City Council in effect has rejected a developer’s bid to build a 90-home project for seniors 55 and older on the largely-vacant 45-acre parcel on Foothill Road that for years has been the home of the late Jim Merritt and his family (pictured).

Mayor Jerry Thorne cast the deciding vote Tuesday night at a priorities-setting meeting, keeping the DeSilva Gates Construction Group’s plan in the “C” category, meaning it won’t get the city’s consideration for at least another two years, if then.

Jim Summers, president of the DeSilva Group, had asked that the project be advanced to the “A” or “B” categories so that construction permits could be submitted and work started.

At a council workshop meeting last week, with Thorne absent, the council split 2-2 in commenting on DeSilva’s bid.

At that meeting, the Merritt plan proved to be the most contentious of the nearly 90 proposed short-and long-term objectives brought forward for the council to rank for consideration in allocating resources and staff time in its two-year work plan for 2019-2021.

But with opposition to the project continuing, Thorne dashed DeSilva’s hopes, telling Summers: “Let’s leave it as a C, there’s just more work to do on this plan.”

“We’ve had a huge number of e-mails on this, mostly in opposition,” Testa said. “Our city has met all of our housing requirements, so we don’t need this.”

Brown added: “This (development) could mean another 900 trips per day on Foothill Road. Plus, the half-acre lots planned there won’t help (the city’s) water situation.”

For DeSilva, it was another defeat over efforts to develop the unincorporated, hilly, former walnut orchard that is essentially an Alameda County island of property sandwiched between two City of Pleasanton residential neighborhoods and Interstate 680 at the back.

The city’s approval of a development plan for 89 homes by the property’s late owner Jim Merritt was overturned in a referendum measure in 1999 and affirmed later on the owner’s appeal by Alameda County Superior Court Judge Henry E. Needham, Jr.

DeSilva’s plan this time not only called for restricting homes sales to buyers 55 and older, but also would have added pedestrian and bicycle paths along I-680 to Foothill High School and Muirwood Drive, an alternative to heavily traveled, two-lane Foothill Road.

Summers also told Thorne that his company would have worked with the city to add bicycle and pedestrian paths on Foothill, another priority on the council’s two-year work plan that was also scuttled after the DeSilva project lost support.

Still, the two-year work plan adopted by unanimous vote by the council Tuesday includes scores of other priorities. These include restarting the planning of development of the East Side of Pleasanton, another largely empty 400-acre site off Valley Avenue, and renovating the Amador Theater, where an aging fire escape has forced the closing of the balcony and water seepage on the other side is affecting the structure itself.

Also given high priority status were the pending update of the Downtown Specific Plan, creating a framework to address redevelopment in the Stoneridge Shopping Center, monitoring regional and state housing legislation as well as regional transportation projects, and traffic, bicycle and pedestrian safety improvements.

New priorities to be undertaken in the next two years also call for addressing water sustainability issues, updating the city’s climate action strategy, working with the school district on facility needs where the municipal government could participate, expanding and improving public safety initiatives and developing a comprehensive strategy to curb homelessness in partnership with other Tri-Valley communities.

For the past 15 years, the Pleasanton City Council has adopted a two-year work plan.

“The public process in developing the work plan allows for the community to engage in open dialogue with the council and city staff in implementing our shared vision for Pleasanton” said Nelson Fialho, city
manager.

“Now that the council has adopted its 2019-2021 Work Plan, there is a clear direction on what we will be working on to deliver these priorities,” he added. “City staff will work to allocate resources to achieve these objectives through the city’s two-year operating budget and four-year capital
improvement plan.”

The finalized list of priorities for the next two years will be presented to the City Council for review and adoption in June, prior to the July 1 start of the new fiscal year.


Great information, thanks for sharing!