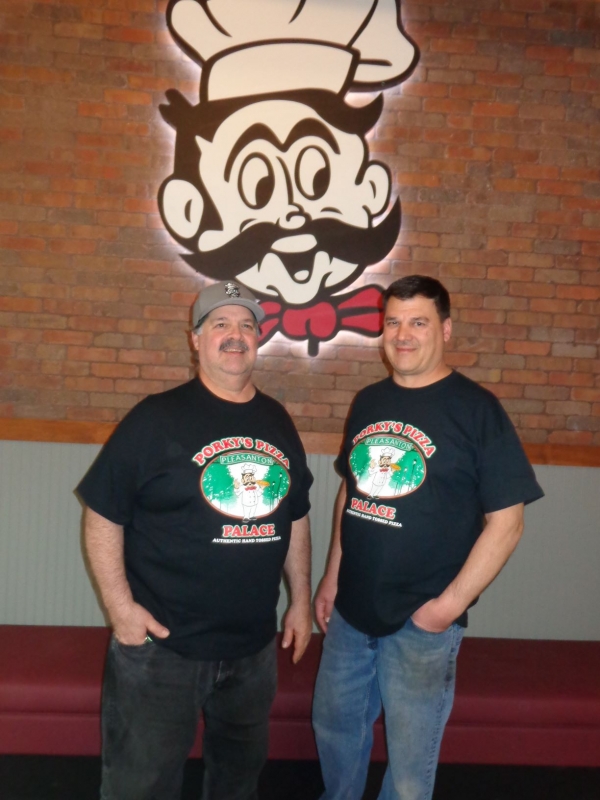 Thanks to the long and blustery winters in Chicago and northern Illinois – which I remember well -- the Valenziano family moved west and has just opened their second Porky’s Pizza Palace, this time in Pleasanton where they live.

The new restaurant is located in the former Straw-Hat Pizza eatery at the corner of Hopyard and Valley, across from Gene’s Fine Foods.

“We didn’t plan any special festivities other than a sign on the door that we’re open,” said Nick Valenziano, son of Gregg Valenziano. Gregg and his brother Gary are co-owners of Porky’s (pictured above).

Pleasanton’s new Porky’s is a carbon copy of Porky’s Pizza Palace in San Leandro, founded by the Marrone family in 1963. It was purchased by Gregg and Gary’s parents, Shirley and Sal Valenziano, in 1983 following their move from Marengo, Ill. to better climes in Pleasanton.

Sal died in 2005, with the sons taking over day-to-day operations and management of the San Leandro restaurant. A third son, Glenn, died in 2016.

Porky’s is not your typical pizza parlor. With spacious seating, its menu offerings range from authentic hand-tossed pizzas to Italian dinners with homemade meat sauce. Prices range from $8.79 sandwiches to a 50-piece bucket of Porky’s popular chicken for $109.99.

Nick Valenziano, who handles marketing for the restaurant, said the Pleasanton operation will have no wait staff, and thus no tipping needed. Customers will place their orders at the front desk, receive an electronic buzzer to signal when their order is ready, and then seat themselves in the large dining room or at tables in outdoor patios.

Beverages, including wine and an assortment of craft beers, can be purchased at the restaurant’s bar and carried to the tables. Catering, carry-out and delivery services also are available.

Customers can place their orders ahead of time for service in the restaurant or for home delivery at (925) 417-1600 or for delivery at www.doordash.com/

For the busy lunchtime crowd from Hacienda and other nearby businesses, Porky’s also is offering pizza by the slice at the check-in counter.

The Valenzianos plan to be active members of the Pleasanton Chamber of Commerce and other organizations. They will also make space available to local sports teams for after-game celebrations.

Lance Gott has been named Dinner Manager at the Pleasanton Porky’s, with Rachel O’Hare its Lunch Manager.

Shirley and Sal Valenziano were teenage sweethearts when they married in 1956. They opened their first restaurant, the Yum Yum Drive-in in Marengo in 1969, but the lure of California’s better weather and Pleasanton, which they visited, gave them the incentive to move west. Their grandchildren – Nick, Emily and Anthony – attended Hart Middle and Foothill High schools.

Sal was not only the owner of Porky’s in San Leandro, but also the cook, greeter and custodian. He served in the Korean War. He was a regular at sporting events in Pleasanton, cheering his grandchildren on at school games. He’s remembered as the fan who would pull chocolate caramels out of his pocket for the boys and girls at Catholic Youth Organization (CYO) and Hart athletic events.

“When my grandparents came out to California on a trip and found they loved the weather here, they moved the family to Pleasanton,” said Nick Valenziano. “The family is glad they did.”

I love eating time in Porky. The food is delicious and yummy. Web Link


good news, congratulations, I recommend to go to them for dinner, very tasty!