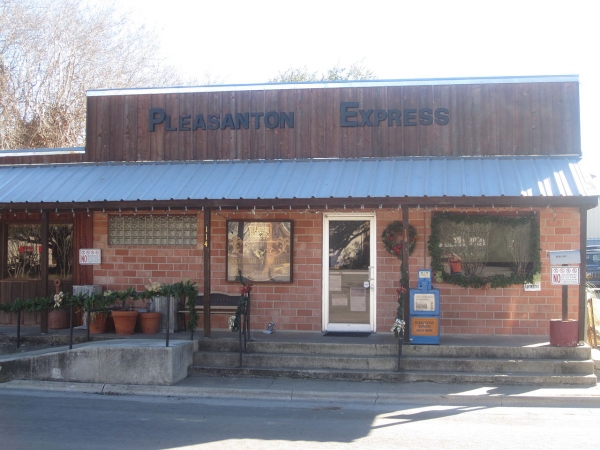 I'm not talking about the five senses, "The Five People You Meet in Heaven," the 5-second rule, the Jackson Five, quintuplets or "The Five" on Fox News.

It's all about the five U.S. cities named Pleasanton and how the other four -- in Texas, Iowa, Kansas and Nebraska -- are celebrating the holidays.

It turns out that if you missed our Hometown Holiday Parade on Dec. 1, you could have dashed down to Pleasanton, Texas for that city's "Merry on Main" festival being held last weekend.

The city's Pleasanton Express newspaper (pictured above) reports that the event included an ice slide, pictures with Santa, cookie contests, fireworks, Christmas caroling and a lighted parade -- all on Main Street.

Pleasanton, Texas is a fast-growing city as it attracts developers and transplants from California and eastern cities moving to the area for jobs in San Antonio, just a 38-minute drive to the north. Its population of 10,393 is up 16% from the 2010 census.

Pleasanton, Kansas has a population of just 1,176 and is served by the Linn County News, which covers the rural areas around our namesake town. Like ours, Pleasanton, Kansas was named in honor of Civil War General Alfred Pleasonton, whose name was misspelled by both cities when they were incorporated.

The paper's big story last week was "Light up Pleasanton," a festival free to the public held in the grassy lot at Ninth and Main.

Pleasanton, Nebraska residents had to travel the 19 miles to big city Kearney (population 33,520) to visit Santa at his downtown Cottage on the Bricks and ride the free train and enjoy hot cocoa at Yanney Heritage Park.

Like our town, the Nebraska Pleasanton (population 350) was incorporated in 1894. It got its name from its location in the Pleasant Valley of the Loup River. It's also a village, with far less municipal government powers than a town or city.

The smallest Pleasanton-named town in the country is located in Decatur County, Iowa, with a population of 46, down three from the 2010 census.

Founded in 1854, it was originally called Pleasant Plain, but the name was changed to avoid confusion with another community of that same name in the state.

That Pleasanton's news is delivered by the Journal-Reporter, headquartered in nearby Leon, where businesses, most grocery stores and retailers that serve the rural area are located.

Thanks to Leon's Chamber of Commerce and Lions Club, this year's home lighting decorations contest that these organizations sponsored included Pleasanton homes as well as those in Leon.

From large to small, it's been a joyous time of year for all five Pleasantons.


Thank you for sharing Jeb, I am glad to know a bit more about the five.

Report Objectionable Content
+  Like this comment
Posted by Word Link, a resident of Vintage Hills Elementary School,
on Jan 21, 2019 at 2:04 am
Word Link is a registered user.


Thank you for sharing Jeb, I am glad to know a bit more about the five.