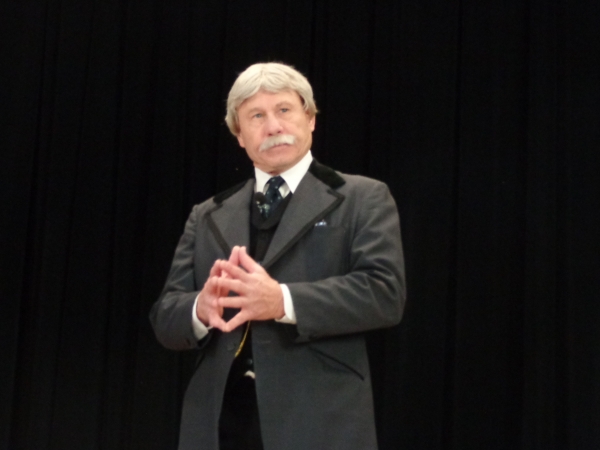 Chautauqua scholar Doug Mishler (pictured), impersonating WWI Gen. John J. Pershing as the grand marshal in Pleasanton's Nov. 4 Veterans Day parade and later that day in a performance at the Veterans Memorial Building, brought back memories for me.

Not of Gen. Pershing, who died in 1948, but of a movie about him that I was watching in a suburban Chicago hospital when my daughter Kerry was born.

This hospital was one where fathers were viewed as unnecessary participants in the delivery room, so I was relegated to a small waiting room where a superb film on Gen. Pershing was airing on a small TV set.

In the middle of the movie, just as Pershing was launching a major attack on German troops, I felt a tap on my shoulder. It was the doctor inviting me to follow him to meet my new baby.

It was a brief meeting, however. It was 3 a.m. and I was asked to leave. When I walked by the waiting room, the TV was off, but I was determined to find and finish the movie somewhere later. No luck. It was out-of-date, out-of-stock, nonexistent.

I’ve kept the Gen. Pershing story alive by mentioning it every year on Kerry’s birthday right after she blew out the candles.

Then last month on my birthday, as I was looking forward to Mishler’s presentation, this daughter (yes, that one whose birth interrupted my movie) sent me an email: “Dad. I have felt guilty these past years about the fact that you and Gen. Pershing were abruptly separated on my birthday so I want you check this one out on your birthday.”

Attached was a 56-minute documentary about Pershing describing much of the historical narrative I had missed in the hospital waiting room. On Nov. 4, Mishler filled in the rest.

Mishler is called a Chautauqua scholar because he follows the model made famous by the Chautauqua Institution of Western New York, where actors learn to step onto the stage as historical figures, playing the role of the real character.

Sunday’s parade and Mishler’s portrayal of Gen. Pershing recognized the 100th year anniversary of the end of the 1st World War, known then as the Great War and the War to End All Wars. It ended on what used to be called Armistice Day, on the 11th hour of the 11th day of the 11th month, or Nov. 11, 1918.

In his presentation, Mishler, depicting Pershing, shared the experiences of the commander of the American Expeditionary Force on the Western Front. He discussed his experiences in battle, his years at West Point, both as an under-performing student and later as an instructor, his military pursuits in the Philippines, Mexico and Indian tribes on their dwindling reservations.

He also talked about Pershing’s camaraderie with other military greats, including President Theodore Roosevelt and future Generals George Marshall and George S. Patton. He shared funny anecdotes and honest opinions about many of these famous men.

Mishler talked a little bit about Pershing’s own family tragedy. On Aug. 27, 1915, while Pershing was deployed to Fort Bliss, Texas, a lacquered floor caught fire at his home at the Presidio in San Francisco. This resulted in the smoke inhalation deaths of Pershing’s wife Helen and their three young daughters, Mary, age 3, Anne, 7, and Helen, 8. Only their 6-year-old son Francis Warren survived.

Pershing was given two orders by President Wilson. He was to go to Europe and return alive. He did just that, and I would say to the general today thanks for a job well done.

And thanks to Kerry for remembering your dad’s love of the movie about one of this country’s great heroes.