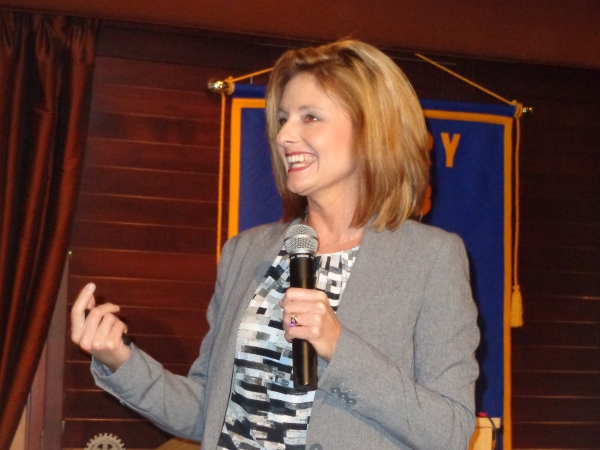 Pleasanton is playing a big role in encouraging recycling across America thanks to Jill Buck (pictured), who in 2002 wrote the Go Green Initiative that is now the largest and fastest growing comprehensive environmental education program in the country.

The initiative has even morphed into a hands-on effort to conserve natural resources for future generations and protect human health through environmental stewardship.
It also has hastened the pace of recycling centers. Many cities now require residents and businesses to separate green waste and recyclables from trash headed for landfills.

But Buck, the Pleasanton Weekly's 2017 Tri-Valley Heroes recipient for Environmental Stewardship, said more needs to be done as landfills fill up and recyclables lose buyers.

She accompanied students to a Harvest Power compost center in Manteca where they saw how wastes can be kept out of landfills. The company, which operates 25 facilities around the country, recycles two million tons of organics a year, creating 40 million bags and hundreds of cubic yards of quality soils and mulches in the process.

In the near future, refuse companies may have image-sensing cameras to detect toxic materials and other contaminants being tossed into their trucks. Homeowners or businesses responsible for the flaw could then automatically be issued a citation.

"Every good thing that has been accomplished by the program started right here in Pleasanton," Buck said in remarks made recently at a luncheon meeting of the Rotary Club of Pleasanton. "It's been the support of this community that's made everything possible."

It all started when Buck was serving as the PTA president at Walnut Grove Elementary where her older daughter was attending school. A former Navy officer whose job entailed educating fellow officers about then-new recycling mandates across the federal government, Buck was surprised to find the practice missing from her daughter's school.

"We were teaching 18-year-old sailors to do it and it was beyond me why we weren't teaching elementary school students to do it at the time," she recalled.

Buck said she wanted to jump-start recycling at Walnut Grove, but knew that unless teachers added their support, the program would fail. So, she enlisted the support of local organizations to raise $345,000 to buy recycling bins and fund mini-grants for teachers interested in spearheading the project.

"We offered incentives," Buck explained. "I was on campus every day and if I saw kids actually recycling in a classroom, the teacher received a $100 mini-grant. Once that happened, all of the classrooms were recycling overnight."

As adviser for Local Leaders of the 21st Century at Amador Valley High School, Buck arranges guest speakers and field trips for students, such as to the Vasco Road Landfill as part of their study of Pleasanton's waste system. The concept, Buck pointed out, is to enable students to enact change themselves.

In their first year, they found an environmental initiative to work on right away when the city of Pleasanton began implementing an ordinance mandating that businesses that generate a lot of food scraps to sort those from their trash.

They took it upon themselves to go out and educate community members about the new policy, giving a presentation at a Pleasanton school board meeting and at an informational meeting for businesses that was hosted by the city.

At that point, Buck turned her attention eastward, taking her initiative first to New Jersey schools in Camden and Newark, and then beyond. Since then, the initiative's reach has grown to all 50 states and 72 countries.

Today, more than 2.5 million students are now following the Go Green Initiative, doing what Pleasanton kids started back in 2002 -- quite an accomplishment by Buck.


I requested a green waste garbage bin from Pleasanton Garbage service so I could separate out my compostable waste from my garbage but was told they do not offer green waste service in our neighborhood.

The Impact of COVID-19 on Our High School Juniors and Seniors
By Elizabeth LaScala | 0 comments | 1,839 views