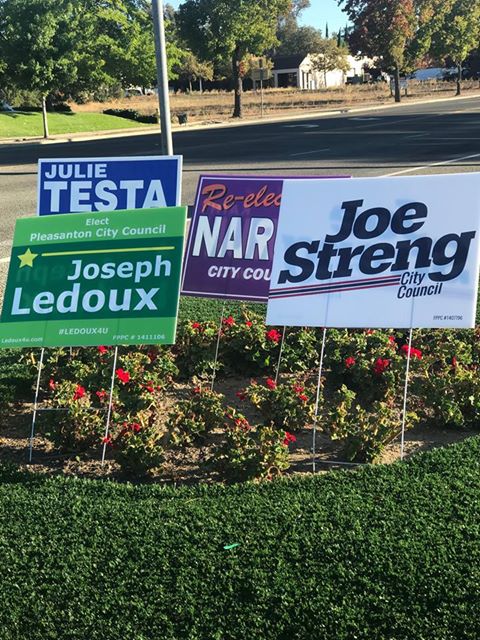 Voters have to hand it to the four candidates running for two seats on the Pleasanton City Council for their stamina, determination and personal commitments.

They’re knocking on voters’ doors, debating in public forums, shaking hands at Farmers Market every Saturday and, all the while, raising contributions to finance their campaigns.

Mayor Jerry Thorne is also a candidate, seeking re-election to a fourth and final term. But running unopposed for the first time, he’s taking a break from the strenuous campaign work.

As with others who seek public office, these City Council candidates willingly disclosed on the state’s Fair Political Practices Commission’s Form 700 their statements of economic interests, personal information most of us prefer to keep to ourselves.

Now online for everyone to see, this information is really an open book that
provides transparency and ensures accountability of candidates’ financial
interests. This helps ensure they’ll make decisions in the best interest of the public
and will serve as a reminder of any potential conflicts of interest in issues before the council.

Pleasanton candidates must be U.S. citizens, have no felony convictions, and show that they live here, all stated on Form 700. They must report where they work and income (but not income taxes), and list all stocks and bonds of companies that do business in Pleasanton as well as any loans other than their home mortgages.

Just as important are the campaign finance statements, called Form 460, turned in to City Clerk Karen Diaz under guidelines established by the FPPC and also posted online.
Most candidate contributions this year have been $250 or less, only a few at $500 and only two for $1,000 or more. Expenditures also have been modest, with the largest payouts going for Facebook promotions, video production, newspaper advertising, yard signs and campaign literature.

In the campaign period from July 1 through Sept. 22, Councilwoman Kathy Narum held the largest war chest among the four council candidates of $13,722, which includes funds leftover from her last campaign and $9,424 contributed since July 1.

Narum had one contribution of $2,000, that from the Jerry Thorne for Mayor committee, and two separate contributions of $500 each were made by George McMichael and Rich Reed, her brother.

Three supporters donated $500 each to Joe Streng’s campaign, the most anyone
contributed to the candidate. They were from the Jerry Pentin for Council campaign fund, Kathy Soldati, a Pleasanton teacher, and Steven Jensen, who is retired.

Allen Roberts, a retired computer manufacturing engineer, and Laurene Green-Homer, an engineer, each contributed $500 to Testa’s campaign, the largest contributions she has received.

The top contribution for Joe Ledoux’ campaign was $1,000 from Jeffrey Parrett of Pleasanton.

So far in this campaign, Streng has spent the most at $6,690. Much of this went for Facebook posts, video work, the printing of flyers, banners and T-shirts, and copies of precincts lists.

Narum has spent $5,322, most of it for printed literature, door-hangers and yard
signs. These expenditures, common for all candidates, included website design fees
and newspaper ads. Half the $500 cost of sponsoring the final 2018 Concert in the Park on Aug. 31 was donated in-kind.

In his most recent campaign filing, candidate Ledoux reported charges to his
Citibank credit card account of $1,654 for signs and other materials ordered from Vista Print in Waltham, Mass., and Build A Sign in Austin, Texas. He also lists a campaign debt of $2,018.

Voter information guides for both Alameda County and statewide elections have been sent to all registered voters in Pleasanton. Absentee ballots were placed in the mail Monday. Voters can send their completed ballots back upon receipt. But in the current state and federal campaign environment, voters might want to wait until the deadline for mailing, or wait and go to the polls on Nov. 6.

Sandy Piderit is a registered user.


All candidates deserve appreciation for generating meaningful public debate and attention to the issues that matter for our community.

Report Objectionable Content
+   1 person likes this
Posted by jacksmith, a resident of Apperson Ridge,
on Oct 18, 2018 at 2:35 pm


Thanks for sharing.I found a lot of interesting information here. A really good post, very thankful and hopeful that you will write many more posts like this one.
https://pandahelper.me Web Link https://kissanime.tips

Report Objectionable Content
+   1 person likes this
Posted by martindell, a resident of Valley View Elementary School,
on Dec 27, 2018 at 9:17 pm
martindell is a registered user.


Please have a look at this site for getting more details about your pets.
https://dogsfud.com