Developers tweak plans for Spotorno acreage in hopes for approval 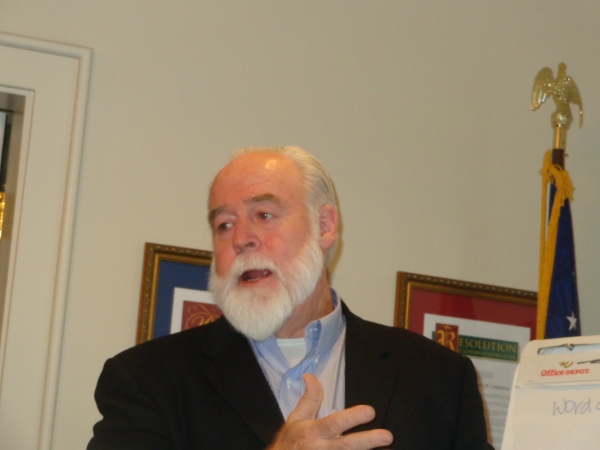 A development group once rebuffed in its plan to build pricey homes along Alisal Street on a 31-acre site known as the Spotorno Flat thinks its new plan has a chance of being approved.

Michael O’Hara (pictured above) of Tim Lewis Communities told a Pleasanton Chamber of Commerce forum this month that there are enough revisions to satisfy city leaders even though he’s sticking with the 39 homes, a number they didn’t like a year ago.

The site lies between the Faith Chapel Assembly of God Church on Alisal and the Callippe Preserve Golf Course. Its current zoning allows for only 22 homes.

Although the city’s Planning Commission indicated in June 2017, when O’Hara presented his original development plan at an informal workshop meeting, that it likely would not approve rezoning the site to allow more than the 22 homes, O’Hara thinks he’s tweaked the plan enough to gain reconsideration.

The major changes are:

- Eliminating the $15-million so-called “bypass road” as currently required in the Happy Valley Specific Plan that was planned to run from Sycamore Creek Way to Westbridge Lane and the golf course.

- Closing Westbridge Lane at Alisal Street by turning this main road that golfers now use to reach Callippe into a cul-de-sac at that location.

- Building a new road, to be called Clubhouse Drive, from Alisal through his new development to connect to Westbridge and then onto the Callippe clubhouse and parking lots. A traffic light would probably ease access with traffic to enter and exit Clubhouse Drive at Alisal in either direction. Currently, left turns from Westbridge onto Alisal are prohibited except in early morning commute hours.

- Dedicating approximately 123 acres of the remaining property Tim Lewis Communities would own as permanent open space to be managed as a conservation easement by an unrelated third party.

- Creating and maintaining trails to connect to those now around the golf course. They will wrap around the new development and also will lead to the water storage tank above Westbridge Lane, where it could eventually connect to any trails built on the bordering Foley Ranch.

- Adding 3 acres of open space at the lower end of the development off Alisal Street to filter storm water before it flows into the city’s storm drain system.

O’Hara said the Spotorno family will continue to own and operate their ranch on a 42-acre section at the top of the total 154-acre parcel the family now owns.

“They’ve lived there a long time and they’re not planning to move away,” he said at the Chamber’s 2020 Forum. “Maintaining the ranching operations is very important to them.”

Alex (Al) Spotorno, who died in March, was remembered at the chamber meeting for his sense of humor, generosity to others and his community involvement. A rancher in Pleasanton for almost 70 years, he lived on the family ranch, established in 1867, with his wife Laverne.

By agreeing to have his property annexed into Pleasanton, he enabled the city to acquire the acreage needed for Callippe Preserve, a fact some at the 2020 forum said should be remembered as the city considers the new development plan.

Previous development concepts advanced for the Spotorno acreage since 1999 looked at either 75 or 79 homes on both the lower flatland and hilly acreage. The city-approved Happy Valley Specific Plan contemplated 97 houses on the property.

O’Hara said his 39 homes would be built on lots with an average size of more than 25,000 square feet, twice what a previous developer had planned. The entire site would be compliant with hillside construction restrictions imposed by voter-approved Measures PP and QQ.

He hopes to take his latest development plan to the Planning Commission and City Council for approval later this year. If he gains approval, construction could begin in early 2020 with the first buyers moving in later that year.

Opposition is expected from some residents of Happy Valley, an unincorporated community along the northwest side of Alisal, homeowners along Happy Valley Road and possible Alameda County representatives. Their concern will be over increased traffic on Alisal stemming from the new development and unrestricted access to the new road leading to the golf course.

The public hearing for this project has been postponed untill WEDNESDAY, SEPTEMBER 12th at 7.00pm at the council chambers, 200 Bernal Ave. Pleasanton.
All the neighbourhood residents should attend to express their views about this new development and NO bypass road which was a part of Happy valley specific plan.
In my view this increased traffic will make our streets more unsafe as we already experience a lot of speeding golf course patrons. A bypass road is a must to bring back safety of our country roads.