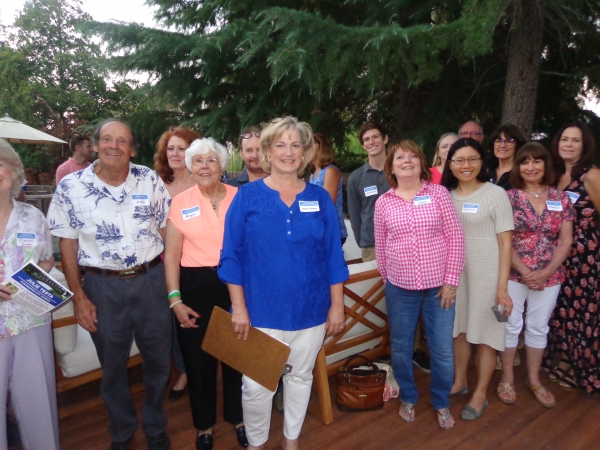 School and city activist Julie Testa (pictured) was surrounded by supporters Monday night who signed nomination papers needed to place her on the Nov. 6 ballot for election to the Pleasanton City Council.

The event was held at the home of Kathleen Ruegsegger on Vista Diablo Court just off Vineyard Avenue in Pleasanton.

Testa becomes one of three candidates for the council where two seats are to be filled in the November municipal election. The others are Councilwoman Kathy Narum, who is seeking re-election to a second four-year term, and Joe Streng, who stepped down earlier this year after nine years on the Pleasanton Parks and Recreation Commission.

Councilman Arne Olson, who is currently serving as the city’s vice mayor, is not seeking re-election to the five-member City Council.

Testa, a former city commissioner on the city's Human Services Commission and a longtime advocate of measures to reduce school overcrowding, ran unsuccessfully against Mayor Jerry Thorne two years ago.

She received 11,777 favorable votes to Thorne’s 17,475 votes.
.
In remarks to supporters Monday, Testa said her goals if elected to the council will be to:

• Create awareness that proposals to inject recycled sewer water into Pleasanton aquifers would not be safe;

• Stand up to any state or legislative “overreach” to maintain local control, and,

• Collaborate with the school district on issues related to expanding enrollment.

“For last two years, I have been to every downtown specific plan meeting,” Testa said. “We want to preserve our downtown.”

As for the city’s pension liabilities for current and retired employees, Testa vowed to work hard to find ways of coping with and paying down those unfunded obligations.

“I am committed to tackling this city’s debt,” she said. “While I think we have done a better job than many others in addressing this debt, it’s going to be an ongoing effort to end it.”

Testa has been involved in community activities for more than 30 years, including serving for 11 years on the city’s Human Services Commission.

She also served on the board of directors of Tri-Valley REACH (Resources Education Activities Community and Housing) and the National Alliance on Mental Illness (NAMI) Tri-Valley.

Testa and her husband Nick, who live in the Pleasanton Hills neighborhood, are small business owners. Their three children attended Pleasanton's public schools and now are graduates of California universities.