At 60 gallons an hour, I had quite a leak

Uploaded: Jun 30, 2018
If I ever needed better convincing to register for regular reports on how much water I’m using at home, an underground pipe leak 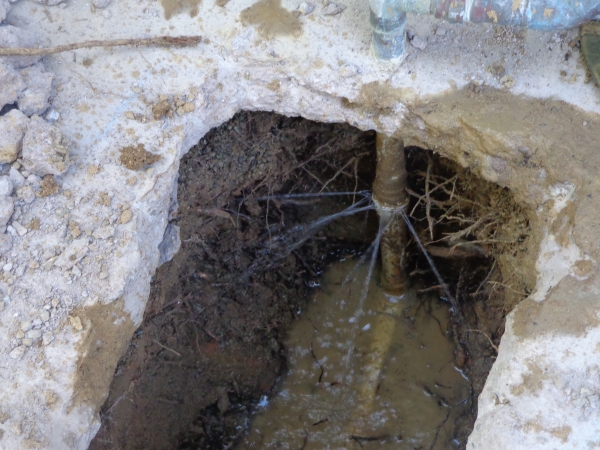 (pictured) this month sent me signing in.

What my wife and I saw as a slight trickle on the edge of a side yard patio Thursday gradually grew to a large puddle by Friday afternoon. A call to a plumber confirmed that it was likely coming from the main water line from the street meter box to the house and suggested we turn off the water, which we did.

It turns out that monitors at the city water department had spotted the leak on Wednesday, long before we did. Late Friday, after we had already turned off the water, the mail carrier delivered a letter from Rita Di Candia, the city’s water resources manager. She explained the “City’s Advanced Metering Infrastructure,” then added:

“After careful review of the hourly meter reads from the water meter located on your property…there is a constant flow through this meter…estimated to be an estimated loss of 60 gallons of water per hour.”

Thanks Ms. Di Candia and the city water department for the letter, but that took three days to reach us. A phone call would have been better – or even a stop-by from someone on the water crew. That could have helped us stop the “constant flow” immediately, sparing us a huge water bill this quarter and saving 60-gallons-an-hour of wasting a vital resource.

I don’t know if others in town are experiencing pipeline breaks or receiving these kinds of mailed notices about possible leaks. A plumber (pictured) and a leak detector we hired to begin the work on finding our leak said these types of underground leaks occur throughout Pleasanton and more so in Dublin where PVC pipes and fittings are now common.

But they’re not uncommon either at a 31-year-old home like ours due to settling ground or far-reaching tree roots.

As Ms. Di Candia wrote, among the many benefits of Pleasanton’s recent $7 million project to replace water meters in the city, including mine, with so-called “smart” meters now allow us to see daily, even hourly, readings of our water usage.

By registering online, we can find out how much water we’re using for those morning showers, or to sprinkle the lawn or even to wash several loads of clothes.
Most important, these smart meters also can alert us to a leak, which may not be visible from a faulty faucet or irrigation system. If it’s like mine, from a buried pipe, it can take days before wet spots show a problem, long after a significant water loss has already occurred.

Of course, Murphy’s Law dictates that whatever can go wrong, will go wrong late on a Friday afternoon. By the time I received the letter, the city water department had closed for the weekend. Most plumbing contractors weren’t available until Monday.
So, I grabbed my water shut-off curb key (about $9 at a local hardware store) and stopped the loss and cost of leaking water. We went without running water until Monday afternoon. Try that for a leisurely weekend!

“Monitoring 22,000 meters is quite an undertaking and a demand on staffing resources,” she explained.

Customers can manage their water consumption and set notifications using readings through a new “Customer Portal” that can be accessed from a desk top or mobile device.

To sign up, visit www.pleasantonwater.com/ I’ve now done that and urge everyone else to do the same.

I see leaks fairly often (older homes) typically the curb has an outlet in front of the home, where the water flows from. If you have water coming from that outlet, it might be time to check for broken pipes.
Plumber had to reroute our pipes from floor to ceiling (repairing via foundation was not an option)

Report Objectionable Content
+   1 person likes this
Posted by Linda Kelly, a resident of Vintage Hills,
on Jul 5, 2018 at 4:37 pm
Linda Kelly is a registered user.


Even leaks which occur on the weekends can be addressed by a phone call to the police department non-emergency number. Even though short-staffed, the water utility has water technicians available on-call for just such circumstances, and the 931-5100 number will get results in reasonably short order.

In cases such as yours, requiring your own water to be shut off, they can even temporarily connect your house to your neighbor's water using a garden hose between your two homes. Good reason to be friendly with your next door neighbor. They make certain an adjustment is made in your neighbor's bill to make up for your extra consumption, and there may be a somewhat reduced but liveable flow, but you'll be able to wash the dishes and have a shower.

In addition to supplying your home with water, this serves to avoid those insanely high weekend plumbing rates. When it happened to us, it was a win-win.