Livermore's Marchand, aka the mayor of Seville, seeks re-election 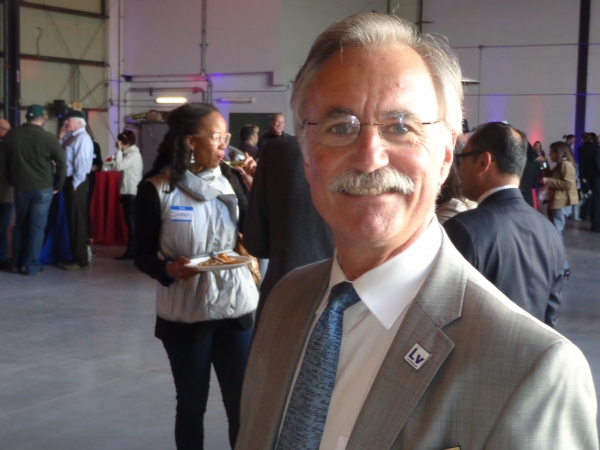 Livermore Mayor John Marchand (pictured) launched his bid for re-election before nearly 200 supporters at a crowded airplane hangar at the city's municipal airport.

There was just one problem: Marchand's gala, including food, beverages and a DJ, started just as Game 1 of the NBA Finals was getting underway between the hometown Golden State Warriors and Cleveland Cavaliers.

"When we scheduled this get-together, we had no idea this would also be the first day of the finals," Marchand apologized. "The fact that you all came here to support me is truly appreciated."

"In my final term, if re-elected, I will work to keep Livermore that way," said Marchand, who was first elected to the City Council in 2005 and has served as mayor since 2011.

In citing a long list of achievements, Marchand said he was especially pleased to join in the groundbreaking a few weeks ago for Stockman's Park. The centrally located downtown park will be built in a horseshoe shape with a half-acre of grass, trees, a plaza and public art to celebrate the city's rodeo history.

"By creating this park, we're keeping a promise made over 55 years ago to recognize the contributions to Livermore by stockmen and local veterans," Marchand said. "We're getting things done!"

Also ahead, Marchand wants to stay in the mayor's seat to follow through with the development that he favors of a new small theater downtown, a science museum, artisan shops, galleries and a boutique hotel.

But staying in office may not be easy.

He'll likely face an opponent and vigorous opposition from at least one citizens' group. The Friends of Livermore worked to successfully defeat two Marchand allies up for re-election in 2016: council members Stu Gary and Laureen Turner. Newcomers Bob Carling and Bob Coomber, both backed by the Friends, are now on the council.

Friends opposed Marchand's re-election as well, but the group failed to field a viable candidate before the 2016 filing deadline. This year, filing deadlines will likely be met.

By striking out early, Marchand hopes to solidify a strong base and win at the polls in November. He's in active pursuit of voters, including the cheering, though somewhat small crowd he had at the Attitude Aviation hanger.

In April, he led groundbreaking ceremonies for a new $6 million Livermore City Council meeting hall next to the city's civic center and an 1,800-square-foot emergency operations center long sought by the Livermore Police Department. Both projects Marchand won City Council support to finance.

Earlier, he also joined the four other Tri-Valley city mayors in a trip to Washington, D.C. to advocate for regional priorities with federal officials.

And, he's a regular at the annual Mayors' Summit, where traffic, transportation and housing dominate the discussion.

Marchand is a chemist by background, an oceanographer and actor. He's been a member of the American Water Works Association for more than 30 years. In its AWWA Connections newsletter, the association notes that Marchand's resume is four pages, single-spaced, and that's the abbreviated version.

When Marchand isn't tied up with mayoral duties -- and the 28 local and regional boards and committees he sits on -- he acts in community theater. According to Connections, he's performed in more than 25 musicals, plays and operas, many in Livermore. Hands down, his favorite role was in 2013 when he played the Mayor of Seville in "Carmen."

Marchand is a leach with a $110,899.95 a year pension according to Transparent California who drives through water rate increases to protect that bloated pension (it still tastes bad in the summer and there is no new capacity). Marchand is always wanting to raise taxes and tried to put a parcel tax on the November ballot saying it was "for the Bankhead" but the Bankhead called him out on that lie and it failed.

Other mayors in the Tri-Valley have no respect for him. Livermore can do better!


Like many in the seat of power he has learned to work in rooms closed to the public, using his authority to implement his personal vision with indifference to the voice of the people. He believes City Staff are present for his bidding and directs them to take action outside public review.

Report Objectionable Content
+   1 person likes this
Posted by Jeb Bing, a PleasantonWeekly.com blogger,
on Jun 22, 2018 at 9:34 am
Jeb Bing is a registered user.


Marchand needs to just go away, he is intolerable. I hope the Friends of Livermore group finds a viable candidate to vote for. Livermore can not afford another term from his royal highness.