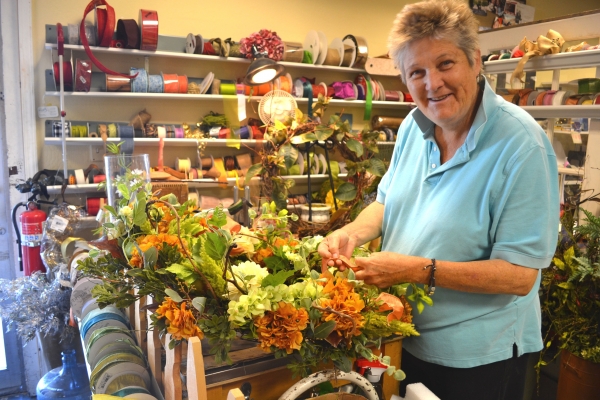 A memorial service will be held at 2 p.m. today for Terri Carlson (pictured), a longtime Pleasanton businesswoman and owner of Milfleur, a unique home decor and antiques store at 200 Ray St. in downtown.

The store is located in a small retail/services center on Ray Street mid-way between First and Main streets.

Ms. Carlson died March 26 with her husband Rick Hutto and daughter Sierra Hutto at her side after having suffered a severe stroke two weeks earlier. She was 60 years old.

The memorial service will be held at Milfleur with pastor Ray Alsdorf of Blue Oaks Church and Ms. Carlson's husband Rick speaking.

The family is asking that those attending the service wear purple or bright colors, since those were Ms. Carlson's favorites. Also, those who have photos of her should bring them along to share in a photo display. Cabana Dave's will have its food truck outside the Milfleur store.

Those wishing to donate in Ms. Carlson's name are welcome to do so at the service. Checks should be made out to Rick Hutto.

Ms. Carlson had moved her store back into the historic 166-year-old Kottinger Barn on Ray Street in January from a second location she had opened on Main Street. Hers was a "yard and barn finds" shop that earned Milfleur Pleasanton Weekly Readers' Choice awards in two categories last year.

Ms. Carlson had been a businesswoman and supporter of the community since 1979 when she opened her first design studio and shop in Pleasanton, called Mother Nature, in Mission Plaza She was also known for her donations to local charities and the countless fundraisers for organizations such as Paws in Need, Open Heart Kitchen and the Amador Valley High School PTSA.

There are no comments yet for this post
Sorry, but further commenting on this topic has been closed.

Stay Together or End the Relationship? Independence or Interdependence?
By Chandrama Anderson | 0 comments | 1,039 views