﻿ After 30 years, Livermore Council will have a ‘21st century’ chamber | Around Town | Jeb Bing | PleasantonWeekly.com |

After 30 years, Livermore Council will have a ‘21st century’ chamber

Uploaded: Apr 6, 2018
Construction has started on a new $6-million Livermore City Council meeting hall next to the city’s civic center and library at Pacific and South Livermore avenues.

The 6,500-square-foot building, due for completion in the fall of 2019, will include a 124-seat council chamber in an amphitheater-styled layout and an 1,800-square-foot emergency operation center long sought by the Livermore Police Department. 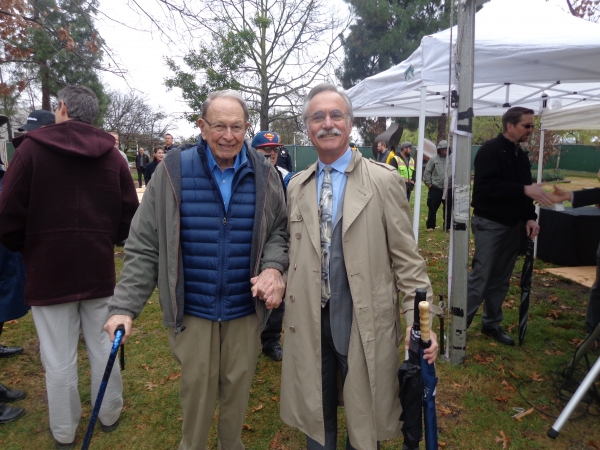 “This new building will allow the council to move out of the 30-year-old, triple-wide trailer where we’ve been holding our meetings and into 21st century Livermore, the home of technology,” Marchand said at a groundbreaking ceremony.

“We’ll have 124 comfortable seats, an enhanced audio-visual system and a meeting room where the audience will actually be able to see presentations, including live broadcasts in the lobby (for overflow crowds),” he added.

The new building replaces the old library on the site.

At the groundbreaking ceremony, City Manager Marc Roberts said that his first assignment after being hired as an assistant planner 30 years ago was to plan for a temporary City Council chamber at 3575 Pacific Ave.

“I was told to design one that would last five years or so and to make it so ugly that they will want to tear it down,” Roberts said. “The first was true but not the second.”

Marchand quipped: “They told him to make it last three-to-five years when they really meant 35!”

Marchand said the new council meeting hall has been needed for decades and it will serve Livermore for generations to come. The new emergency operation center will replace the small room in the basement of the police department that’s now used for that purpose.

“It’s noteworthy to say as we start construction that there was not unanimous support for this building,” Marchand said. “There was organized opposition, with some saying we shouldn’t spend money on a larger more modern facility.”

“However, the City Council elected to represent our residents disagreed and voted to do this,” he added.

He also praised the council for deciding to name the its chamber where meetings are held for John Shirley, whom he called “an iconic member of our community.”

Shirley, now 93, served on the Livermore City Council from 1958 to 1966, including two years as the council-chosen mayor from 1962-1964. After serving in the U.S. Army in WWII, he attended UC Davis and then became Livermore’s first veterinarian, practicing there from 1954 to 1987.

He also has a long record of volunteer service, including many years as a member of the Livermore Rotary Club, which established the John Shirley Exceptional Service Award in his honor.

He told the groundbreaking audience that he was surprised by the controversy over building a council meeting building.

“It seems these days we have to fight for everything,” Shirley said.

The new council meeting building will include staff development flex space and two separate meeting rooms in addition to the emergency operation center, said a design spokesman for Dougherty Architects of Oakland.