Uploaded: Apr 1, 2018
Sandia National Laboratories researchers have identified key chemical mechanisms for the first time that add to the fundamental knowledge of combustion chemistry and might lead to cleaner combustion in engines.

Sandia spokesman Michael Padilla said research identified key chemical intermediates, which are relevant for oxidation reactions at temperatures in the range of 400 to 600 K (260 to 620 degrees Fahrenheit). 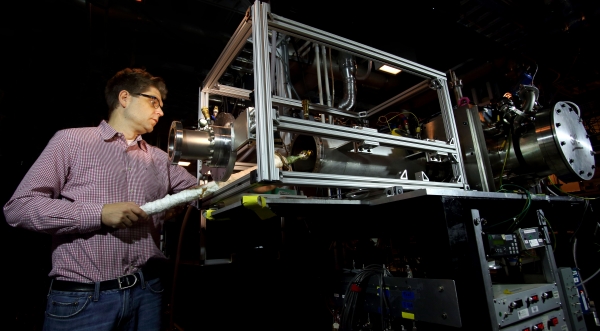 Sandia researcher Nils Hansen (pictured in this photo by Dino
Vournas using a device called a jet-stirred reactor) worked with Kai Moshammer to focus on low-temperature oxidation of hydrocarbons and other alternative fuels, Padilla said.

The chemical nature of the intermediates and their concentrations provided new details on the chemical processes involved in autoignition.

“Autoignition is a chemical process in which a fuel-air mixture spontaneously ignites,” Padilla explained. “It is commonly explained by theory through a set of self-sustaining and accelerating chain-branching reactions. It is most important for understanding knock in spark-ignition engines.”

Hansen and Moshammer were among a multi-institution team of researchers whose work was published. They focused on deepening the insights into low-temperature oxidation chemistry of hydrocarbons and other alternative fuels.

“We can run an internal combustion engine today without knowing the details of the chemistry,” Hansen said. “However, this new knowledge provides new insights that should be targeted by new combustion models. It eventually should allow for the development of more clean and efficient combustion strategies in the future.”

Hansen stressed that these discoveries were made by experiments that focused on chemistry while minimizing the effects of mixing, turbulence and large temperature and concentration gradients.

Padilla said that to conduct the work, the Sandia researchers designed a device called a jet-stirred reactor, which is best described as a quartz reactor into which unburned fuel-oxidizer mixtures are continuously added through four small nozzles to create a homogenous mixture that is then ignited with external heat.

With this approach, the researchers avoid large spatial and temporal changes in the concentrations of the key intermediates and temperatures and the reactor can be readily modeled,” he explained. “The researchers then used molecular-beam sampling and high-resolution mass spectrometry to identify gas components from the reactor.”

Hansen added: “Our persistent interest in low-temperature oxidation processes led to this research,” Hansen said. “While the first studies focused around small fuels . . . we eventually moved to larger, more practically relevant fuels, such as heptane, and ‘accidentally’ detected a signal that was not explainable through the known chemical mechanisms. We wanted to provide validation targets for model developments in the form of molecular identification and concentration.”

Padilla said that Sandia’s work has shown that the scientific community’s understanding of these processes is not complete and that additional reactions and intermediates must be considered.

“This work will help to develop models with better predictive capabilities, and has implications beyond combustion,” he added.

"Hansen stressed that these discoveries were made by experiments that focused on chemistry while minimizing the effects of mixing, turbulence and large temperature and concentration gradients."

I guess I will care more when they have a working prototype using economically obtainable fuel. Spontaneous ignition of fuel sounds more like a diesel engine under pressure, and while there has been development of compression ignition gasoline engines it is hard to implement. Unless they plan on premixing the fuel with oxygen prior to the fuel-air mixture entering the combustion chamber, the assumptions seem pretty wild.