Baker & Glazer: Together again on issues

Uploaded: Mar 12, 2018
It’s been said that as California goes, so goes the country. If that’s true and based on last week’s 15th Town Hall by State Senator Steve Glazer, a Democrat, and Republican Assemblywoman Catharine Baker, there’s hope that the U.S. House of Representatives, Senate and the president will yet see eye-to-eye on some bipartisan legislation. 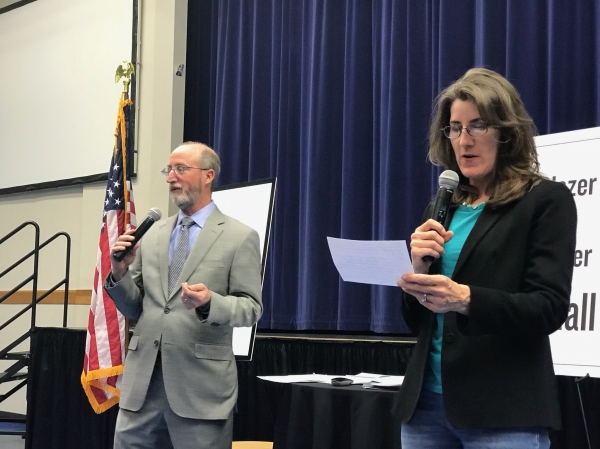 Baker and Glazer (pictured at Foothill High School forum) have been traveling their districts to show that members of opposite political parties can stand together on major state issues.

“We look for common ground, see where there might be differences and then work through them,” Glazer said, adding that the two of them have voted together about 85% of the time.

They talked about that common ground as they reviewed their accomplishments in the legislature and views on pending issues. These ranged from increasing school aid to improving curriculum at state colleges and universities so that students can graduate in four years. Half of the 90-minute meeting was spent answering questions from constituents about sanctuary cities, health care, housing legislation, water, transportation and tax issues.

Gun control dominated much of the discussion with Glazer pointing out that California was the first state to ban assault weapons and continues to have some of the toughest gun laws in the country.

“Even so,” Baker said, “we still have problems. Convicted felons, for instance, are not allowed to have guns, but they do. We need to fix that. We need stiffer penalties for violators.”

On colleges: Both oppose tuition increases of $342 proposed for the University of California and $228 for California state universities.

“I want no tuition increases at UC until its administration gets its house in order,” Baker said, citing an audit that showed the last tuition increase was used to fund office perks and excessive executive and administrative personnel salaries at the expense of California’s students.

Glazer also called on colleges to focus on enabling students to graduate in four years. He pointed to a chart showing average four-year graduation rates for those who started as freshmen in 2013 total 30% or less because they can’t get all the classes they need in those four years. Too many of these students leave, unable to afford the extra years of tuition, he said.

On housing: Baker and Glazer endorsed the $4-billion bond on the 2018 ballot to finance low-income home building and provide home loans for military veterans. But they were less enthused by other housing measures that ease local development restrictions, including height limitations, environmental impact reports and minimum parking requirements to speed up high-density apartment construction.

“In Australia, a third of all homes have systems to recapture water,” Glazer said. “I like that idea.”

“We were just 45 minutes away from that dam breaking,” Baker said. “There was no reason for that to happen.”

On high-speed rail: Baker said this could be a crucial year for the troubled multi-billion-dollar high-speed rail project. Always opposed by Baker, Glazer said he regretfully voted for it.

Costs have gone up by more than one-third since 2016 with the rail authority now spending about $500 million a year. Glazer said. But both he and Baker said there may be bipartisan support in the legislature to cancel the project.

“I think there are a lot of better ways to spend that money,” Baker said.

Other issues that Baker and Glazer shared at the Town Hall event:

Flexible work schedule: Bill introduced by Baker would permit employees to work up to 10 hours a day within a 40-hour workweek without being paid overtime.

Pension reform: The California Public Employees’ Retirement System is more than $138 billion in debt with CalSTRS, the teachers’ retirement system nearly as bad, with $96 billion in debt. Glazer and Baker want to fix that with better options, such as moving retirement funding to individual 401(k) accounts.

“I’m a big supporter of DACA and letting these folks live in our country,” Baker said. “I believe California should be a welcoming place. They are our friends and neighbors. This is their country now; they want to be here.”

Glazer, a former mayor of Orinda, won a May 2015 special election to the State Senate in 2015 and was re-elected to a four-year term two years ago. He represents the 7th District, which encompasses most of Contra Costa County and the eastern portions of Alameda County, including Pleasanton.

Baker, a lawyer, was first elected to the State Assembly in 2014, re-elected two years ago, and is a candidate for re-election this year. Serving in the 16th Assembly District, she represents Pleasanton and the Tri-Valley and Lamorinda.