Uploaded: Mar 5, 2018
Jacqueline Chen, a distinguished member of the technical staff at Sandia National Laboratories, has been elected to the National Academy of Engineering. Chen is among the 99 new members from around the globe in the 2018 class.

Election to the academy is the highest professional distinction for an engineer in the U.S., according to Sandia spokesman Michael Padilla. Those in the new class will be formally inducted Sept. 30 during a ceremony in Washington, D.C. 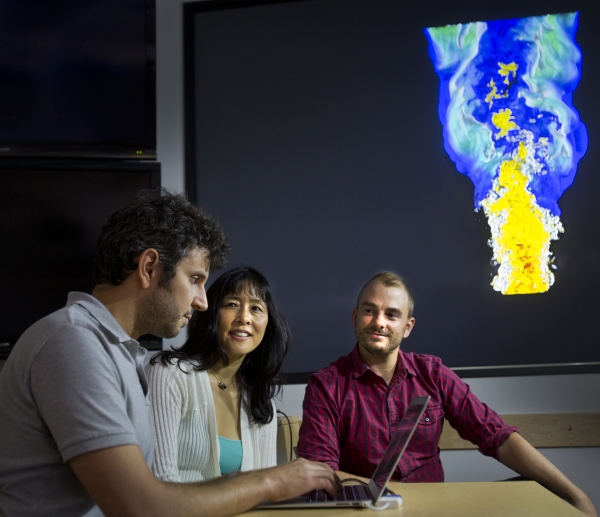 Chen, pictured here in this photo by Dino Vournas with fellow researchers Giulio Borghesi (left) and Alex Krisman, works on recently-identified novel behavior of a key, temperature-dependent feature of the ignition process called a cool flame at Sandia’s Combustion Research Facility in Livermore. She was chosen for her contributions to the computational simulation of turbulent reacting flows with complex chemistry.

“She believes her election recognizes the importance of chemically reacting flows in many important applications, such as combustion engines and the atmosphere, and the rise of computation to an equal status with theory and experimentation in the science trifecta,” Padilla said.

Out of her numerous research achievements, Chen takes the most pride in understanding intricate turbulence-chemistry interactions, exemplified by a recent simulation of a turbulent jet of a complex hydrocarbon fuel spontaneously igniting at temperature and pressure conditions typical of a modern diesel engine.

Chen’s advice to young scientists and researchers is to “believe in yourself, embrace technology advances not only in your own field but in cross-cutting fields and cultivate strong collaborations.”

Chen said many new scientific discoveries will be made at the intersection of multiple disciplines and will require creative thinking and a willingness to work outside of one’s comfort zone as part of a team.

“I’d also like to encourage more women to consider education and careers in science and engineering,” she said.

“Unlike my generation, there are increasingly more role models across the entire research-and-development enterprise,” Chen added. “It’s a rewarding career and a good time to jump in.”

Sandia Labs has major research and development facilities in Livermore and
Albuquerque.