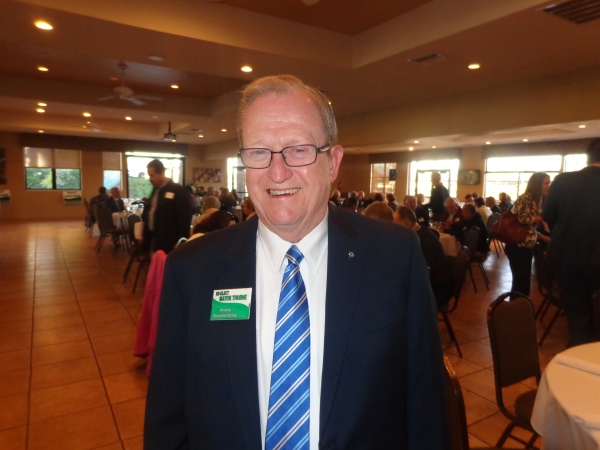 Pleasanton Mayor Jerry Thorne (pictured) launched his campaign for re-election to a fourth and final term as mayor at a sold-out fundraising breakfast last week at the Alameda County Fairgrounds' Palm Pavilion.

Voters won't see Thorne's name on the municipal ballot until Nov. 6, some nine months from now. Still, he's taking no chances on gaining support early in what promises to be a donnybrook of national, state and other Tri-Valley municipal elections this year, starting with the California primary on June 5.

Thorne was first elected to the City Council in a special election June 7, 2005, and then re-elected by wide margins in November 2006 and again in 2010. In 2012, he was elected mayor, a position that in Pleasanton is limited to a total of eight years with the mayor facing voters for re-election every two years. Re-elected in 2014 and again two years ago, Thorne would be termed out in 2020.

Thorne kicked off his campaign in a room filled with supporters, reviewing his achievements and spelling out his agenda for his last two years as mayor.
Thorne said he has put his 40 years of business experience to work as mayor to bring fiscal sustainability and pension reform to Pleasanton.

He cited as major achievements the ongoing financial success of Pleasanton, which closed the last fiscal year with a surplus of more than $6.5 million, spending less than budgeted and gaining $115.7 million in revenue overall, primarily from higher property and sales tax receipts.

He said that was the result of "vision, discipline and planning."

So, in his final two years, Thorne plans to focus on finding ways to expand Pleasanton's vibrant and growing life sciences sector by bringing together the leaders of medical, biotechnology and device firms now here. Together, they will "make sure we are meeting their needs and to grow this vitally important industry cluster."

Other issues he plans to address include:

* Stem the intrusion into local planning by state lawmakers who seek to allow more high-density housing on vacant properties, including on Pleasanton's largely empty 400-acre east side.

* Complete the planning process for a new civic center and library.

* Continue the progress being made to extend BART to Isabel Avenue and an ACE Train connection to relieve traffic congestion on I-580.

* Address concerns over the lack of diversity in local government to ensure everyone is represented in the decision-making process.

"I am proud of this city," Thorne said in concluding his campaign launch remarks. "I believe that we are headed in the right direction and that we will remain a city of planned progress deserving of the high rankings that we have achieved in national polls. With your help and support, I plan to keep it that way."

Wondering why is a registered user.


If Pleasanton has a surplus of more than $6 million dollars, why don't they do more for seniors in this town? They rebuilt Kottinger which houses a whopping 140 people, while there are probably 100 times that many seniors on waiting lists that are 5 to 7 years long. That's not just an estimate; I've checked and seniors are being told now that this is the waiting list time. Many will die before they can get into an affordable, decent housing situation. Why can't some of that money be spent on helping them? Many have lived in this town all or most of their lives and have contributed to making it what it is today, and are now being priced out of town. The lack of concern for seniors in this area is appalling.