﻿ Livermore veteran, 96, has reason to be proud | Around Town | Jeb Bing | PleasantonWeekly.com |

Livermore veteran, 96, has reason to be proud

Uploaded: Feb 16, 2018
Army veteran Manuel Moreno, now 96, has reason to be proud. He served 21 years in the Infantry and the Military Police, receiving two Purple Hearts in World War II. Then, he served another 21 years on the Lawrence Livermore National Laboratory's security detail.

There's another reason to be proud. Manuel and his wife Dalilah, 90, reared five children in a two-bedroom house on Sonoma Court in Livermore, where the elder Morenos still live. 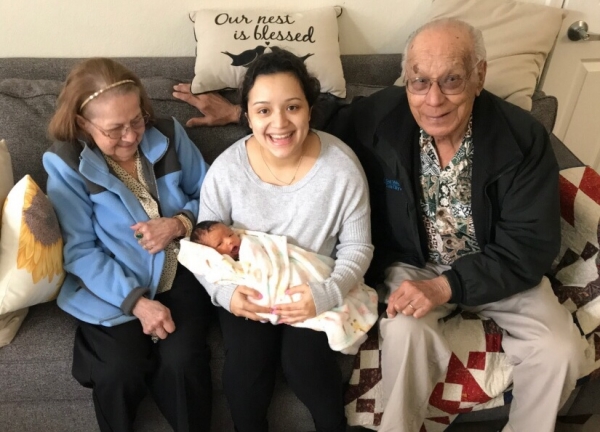 Photo shows Manuel and Dalilah with Bella and month-old Lily.

Manuel has much to talk about. He was 22 when he was drafted into the Army during World War II. After basic training, he shipped out from Newport Beach, Va. to a staging base in North Africa, where he was assigned to the infantry division that stormed the beaches at Anzio on Italy's central west coast in 1944.

“Germans were all around us so we couldn’t move after we landed,” Manuel recalls. “That’s where I got shot in the wrist. But I was able to stay in the fight as we finally broke though. We drove the Germans back and fought our way north, liberating Rome.”

He was in Rome when loudspeakers set up in a public square announced the landing of allied forces at Normandy. It was D-day, June 6, 1944.

Moving north, Manuel and his unit battled the Germans into France. During a particularly heavy battle, enemy fire caused Manuel and others to jump into abandoned foxholes for cover. The next thing he remembers, he woke up while being treated in rear lines for a gunshot wound just above the knee. That gave him his second purple heart.

Manuel -- now a sergeant -- was heading back home to be discharged when he received a "Dear John" letter from Sarah, his high school sweetheart he had planned to marry. Sorry, she wrote, but she'd found someone else.

So he re-enlisted, this time into the Military Police. He was sent to the Canal Zone in Panama. While there, a staff clerk offered to introduce Manuel to her girlfriend as a blind date for an upcoming social.

"Sure," Manuel told her. "Bring her over. We'll go to the dance and have dinner." That's when he met Dalilah, his future wife. This year, they will celebrate their 66th anniversary.

In 1963, the couple thought it was time to return to civilian life. A friend suggested that Manuel apply at Sandia National Laboratories in Livermore, which was hiring veterans. But the human resources office was closed when he arrived, so he walked across East Avenue to the Livermore Lab, which was recruiting for its security force.

Manuel received a discharge from the MPs and took the Lab job, starting at $2.77 an hour. The couple packed up their belongings in Panama and, using their savings, moved into a house they bought for $18,400 on Sonoma Court in Livermore, where they still live.

For the next 21 years until his retirement in 1984, Manuel headed up the Lab's security division that escorted outside contractors into the Lab for ongoing construction projects.

Dalilah stayed home as their family grew, with all five of their children graduating from Livermore high schools. One daughter and a granddaughter hold key positions at the Livermore Lab.

Manuel said that while he has never returned to Europe, that's OK. With such a large family nearby, he and Dalilah don't need to travel. His oldest daughter lives next door and the other 29 offspring provide all the care and companionship they need.

"Life couldn't be any better," he said.

Thank You for your service.
VIVA MANUEL! VIVA AMERICA!


Wonderful to hear about the life stories of seniors! Mr.Moreno received not one, but two Purple Hearts! What a brave soldier he was ! And then to come home. raise a family, and work at a satisfying career! Yes, thank you for your service and I'm glad you've lived such a long, happy, productive life, Mr. Moreno! Your family must be so proud!


It is so nice to read an upbeat, positive story about a veteran. Thanks for posting this.