Uploaded: Feb 2, 2018
Sandia National Laboratories has donated $25,000 to the Valley Children’s Museum in Dublin, a grant, made possible through Sandia’s gifts and grants program. 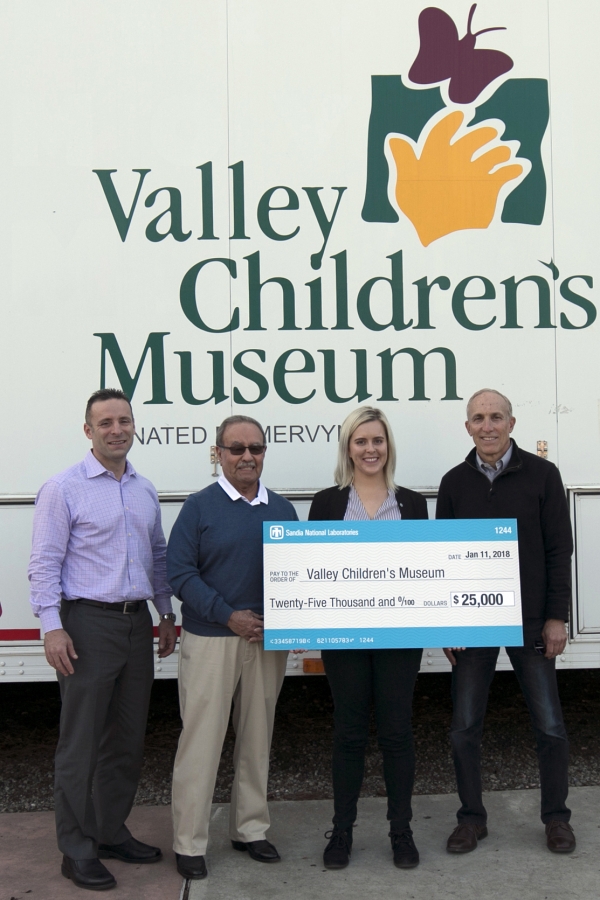 “Sandia is honored to be a partner in bringing the world of engineering to San Francisco Bay Area youth and adults,” Burchard said. “We believe science and engineering is fun and we are excited to inspire children to believe so too. This grant is one of many ways Sandia is supporting our local communities.”

The Valley Children’s Museum aims to inspire lifelong learning in children and families through activities and exhibits that feel like play. The museum is known among Bay Area families for its California mission exhibits.

The history of Spanish missions is a part of the fourth-grade curriculum in California elementary schools. With the support of Sandia, engineering-themed activities and curriculum will be added, Padilla said..

"In addition to financial support, the museum will benefit from Sandia’s greatest resource — its people," Padilla added. "Scientists and engineers from Sandia are invited join the museum’s advisory committee to assist with the museum’s exhibit makeover."

Rachel Wallace, an executive strategy specialist at Sandia, serves on the museum's board of directors and said she looks forward to helping guide the direction and implementation of a children’s museum in the Tri-Valley area.

“Sandia’s grant to the museum to upgrade their current mobile museum experience is immensely impactful,” said Wallace. “Valley Children’s Museum will be able to completely update the current exhibits, with a new focus on science, technology, engineering and mathematics.”

Wallace said the creation of fun, play-based engineering exhibits and activities in the museum will allow children to engage with science, technology, engineering and math (STEM) subjects in an approachable and interactive way, opening a world of scientific and engineering discovery they might not have access to in their daily life.

“This access to STEM is such a tremendous benefit to everyone in our region,” said Wallace. “I hope this will inspire the next generation of scientists and engineers in our community to change the world.”


The donation is a big MITZVAH...Gracias!


Superb article, the amazing blog cover all that information which I need keep sharing all this blog it is very helpful for me. I am glad to visit your website Web Link

Get Couple-Ready for the Holidays
By Chandrama Anderson | 0 comments | 2,571 views