Uploaded: Jan 4, 2018
Reporting from snow-free South Lake Tahoe—you can hike up ski runs at Heavenly Valley and Sierra at Tahoe—there’s that little snow.
Heavenly’s famed Gunbarrel run down the face of the mountain shows far more dirt and rocks than white stuff. Although Heavenly had 20 lifts running Wednesday, only 4 percent of its 4,800 acres of terrain was skiable. It’s the same at Sierra where the two lifts serving the West Bowl (our favorite) are closed. 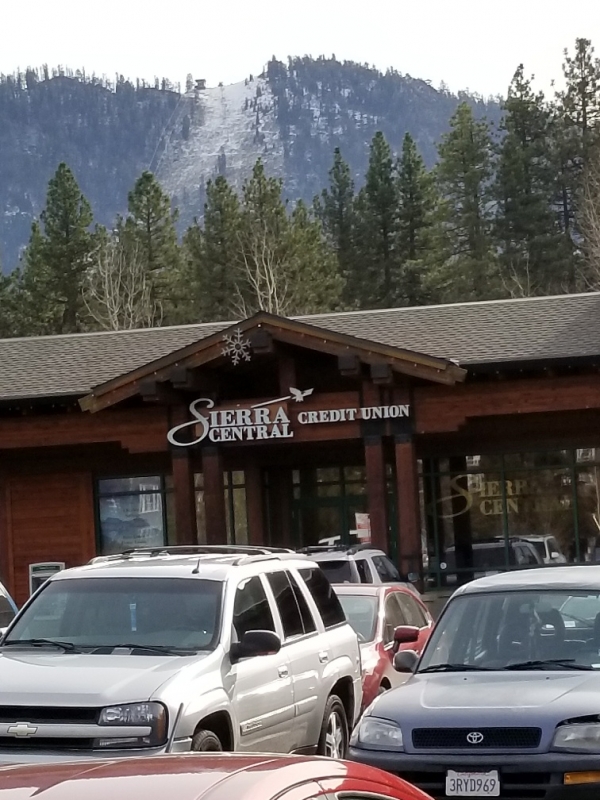 Driving around the south end of the lake from South Shore to Emerald Bay and then back over to Carson City, it is striking just how little snow has fallen.
The showers that hit the Bay Area Wednesday night also came through at lake level as rain. That meant snow only at the highest peaks and did nothing for the snowpack other than hopefully change the weather pattern so we can see additional storms.
December was the driest on record for many Bay Area locations and it was the same here in the mountains.
With many families in town enjoying a New Year’s week vacation, there are plenty of hiking trails open—it’s just the parking access that is closed for the season. So police and highway patrol have been looking the other way when people park on the roads around these trailheads.
The same was true on Highway 50 at Echo Summit where many families were parked along eastbound Highway 50 where the highway is wide and there was a bit of snow play available. 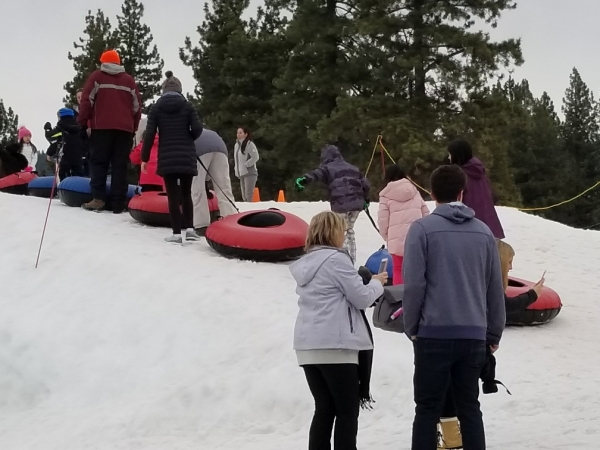 The business making book right now operates the tubing and snowmobile rentals in the large open meadow north of the Montale. They were so busy that there was a crossing guard stopping traffic, so patrons could cross from the casino parking lot into the snow play area. It’s all man-made, but tell that to the kids enjoying schussing down the slopes on the big tubes or the teen-agers and adults renting the snow mobiles.
At $40 an hour for a tube, the cash register was ringing up impressive totals. Wise move by those operators to spend the money to make the snow and now see that gamble pay off.
Sadly, the weather.com 10-day forecast has more rain coming in before some snow showers are expected to hit on Jan. 10 and then another period of dry days. It’s certainly not what the doctor ordered.
Here’s a quick snapshot at why Northern Nevada is a destination for folks tired of high-tax California. We filled up our gas tank at Costco in Tracy, paying $2.58 per gallon. That’s about 12 cents less than we have paid recently at Costco in Livermore and typical to what we have found.
We had the occasion to drop down into Carson City and were delighted to see $2.33 per gallon at Costco in Carson City. If arithmetic serves, that’s a delta of 47 cents per gallon after the Legislature’s increase in California’s gas tax hit late last year.

Mother Nature is a registered user.


So remember humans, global warming is a hoax - and your infrastructure is free! Welcome back to the carefree 1950s.

Report Objectionable Content
Posted by rifasus, a resident of Another Pleasanton neighborhood,
on Jan 7, 2018 at 10:32 am


Once you have connected to internet or wifi, you have to go to a web browser. There are a number of web browsers like Google Chrome, Firefox etc. You can select anyone.Web Link

Report Objectionable Content
Posted by LessMathChallenged, a resident of Livermore,
on Jan 18, 2018 at 1:30 pm

Report Objectionable Content
Posted by manthonia, a resident of Hart Middle School,
on Feb 2, 2018 at 6:36 pm


thanks to all police and highway patrol have been looking the other way when we are park on the roads around these trail heads.
Web Link

Report Objectionable Content
Posted by ecindia, a resident of Amador Estates,
on Feb 7, 2018 at 1:22 am
ecindia is a registered user.

Doing more with the natural spaces we have
By Sherry Listgarten | 8 comments | 3,383 views

The future of homework
By Monith Ilavarasan | 0 comments | 648 views