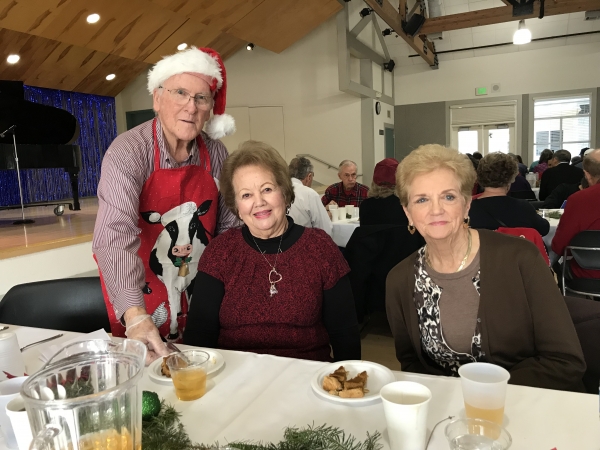 I had the privilege of serving a turkey dinner with all the trimmings to Eppie Baeta (left) and Lucille Murillo at the Rotary Club of Pleasanton's annual Holiday Dinner for Seniors Dec. 8 at the Pleasanton Senior Center. Some 220 seniors attended the free event.

This was the club's 36th annual free Christmas dinner, a tradition started in 1981 as a tribute to Pleasanton's “mature” community.

Fellow Rotarians hosted the seniors starting at noon after decorating the center and preparing the tables.

Gael's Catering of Dublin High School cooked the meal of roast turkey, gravy, dressing and all the trimmings, followed by a desert of pumpkin pie. All of the food was purchased by the Rotary Club, which also provided the Dublin High culinary group with a monetary contribution for its service.

Christmas music was provided during the luncheon by the Valley Voices, a singing group.

For Rotarians, work shifts started at 7 a.m. and ended late in the afternoon as we greeted, entertained and served seniors, including some in their 90s and a number of them in wheelchairs or using walkers.

This year's event involved 70 members of the downtown Rotary Club, plus another 10 volunteers, and was managed by Kurt McAninch. Staff from the Pleasanton Senior Center under the direction of Raymond Figueroa also helped.

With this year’s event, Rotarians have provided more than 9,000 Pleasanton seniors with a free Christmas dinner in honor of their contributions to our community.

Report Objectionable Content
+   1 person likes this
Posted by sweetsonaa, a resident of Carriage Gardens,
on Dec 23, 2017 at 3:09 am


Our microsoft password manager is completely free you wont be billed for this
http://passwordsinmicrosoftedge.com forever.


The user interface makes it possible for workers https://adplogin.org which staff members have them, and also which do not.