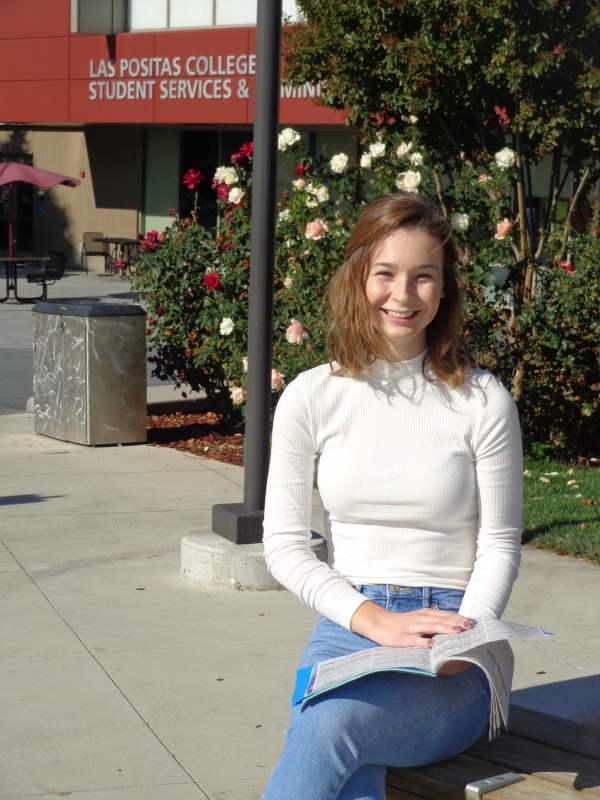 My 19-year-old granddaughter Bailey Little (pictured) was one of hundreds of students on campus Oct. 4 at Las Positas College when an emergency alert sounded in fear that a gunman was at the school.

That turned out to be a student carrying only a Nerf gun intended to be used as a prop for an off-campus activity. But it prompted a call to campus security, nevertheless, and a campus-wide lockdown.

The lockdown was broadcast on the school’s loudspeaker system and followed up by text alerts to registered cell phone numbers and emails. Teachers were told to lock their classroom doors and keep students inside.

While that worked for much of the college campus, some were left out. In Bailey’s classroom, students and the teacher couldn’t hear the loudspeaker alert. That building lacked cell phone reception. They didn’t know about the lockdown until an individual from an adjoining lab told them, long after the alert was first sounded.

When it was over about an hour later, Bailey heard from others that many faced similar troubling situations. She conducted a survey of the school’s faculty and received 52 responses. This is her report.

Although teachers and students were told to lock classroom doors, the survey indicated that many could only lock the doors from the outside while some teachers have no key at all. Also, some classrooms, like Bailey’s, had no landline phone or cell phone service.

Asked how safe they felt during the lockdown, 32% of those queried responded that they felt “very unsafe.” Most said they might have felt safer if they could lock their classroom doors from the inside, with many adding that window shades could make their classrooms less vulnerable to an armed intruder on the outside.

Other safety suggestions: Have landline telephones in every classroom. Make sure cell phones work in all campus locations. Install sturdy desks where students can take shelter. Post color-coded evacuation routes in each classroom.

Even after the emergency was over some 30 minutes after it was reported, teachers said it took an hour before that word was conveyed to those in the lockdown. “We were in there for 90 minutes with only rumors to go on,” one teacher told Bailey. “It would have been helpful if we had received some kind of email or texted information telling us what was happening. We didn’t know.”

Another said: “I personally was appalled that the all-clear message instructed us to resume ‘normal activity.’ Really? What we just went through was not normal. Students were traumatized. I love my LPC family but these actions mentioned were completely unacceptable.”

Most disturbing is the fact that many teachers do not have a key to their own classroom doors, making it impossible to lock during an emergency. Many doors are not lockable from the inside at all, further endangering those in the room. Of the responses to Bailey’s question about locks, 19 of 38 mentioned these as a concern - a shocking number for such a basic safety measure.

One teacher said, "I would like to be able to lock the door from the inside as well as the outside. I'd like a landline in my classroom. I've been asking that for six years since I had a violent student in my class."

Some added, however, that they weren’t sure how to react. They suggested mandatory training for all staff -- adjunct, full-time and administrative – through online courses, literature or instructions during the hiring process.

It’s clear that serious issues of student safety were put to the test. Bailey and others are hopeful LPC will address these concerns.

Is there a way to ALERT the larger community?

Students,teachers,employees, and the community a to be alerted! Perhaps a siren that can be heard over a large area. As we tragically learned, one individual hell bent on harming innocent others can happen quickly and with no warning. Innocent people can be harmed instantly.

Is there a policy re: arming teachers, trained guards/police on campus? If I was a teacher, I would want to have access to a loaded gun.

Also, it's NOT asking too much to provide keys to teachers and staff to protect others. Better safe than sorry. This is a spooky story.

Vulnerable populations need to be protected.


You could make use of straightforward devices; Web Link Change different Android applications as well as video games straight.


It is shocking that such a basic safety measure such as lockable doors is not already in place. Las Positas needs to get its act together ASAP.


You have a lovely and talented granddaughter, Jeb. It was very resourceful of her to conduct that survey.


Training is available if they want it! It isn't free, but you can't put a price on lives.


Students could/should also be trained - especially in the climate we live in now!


It is stunning that such an essential security measure, for example, lockable entryways isn't as of now set up. Las Positas needs to start acting responsibly ASAP.