﻿ Can fatigue be predicted? Sandia Labs team hopes to find out | Around Town | Jeb Bing | PleasantonWeekly.com |

Can fatigue be predicted? Sandia Labs team hopes to find out 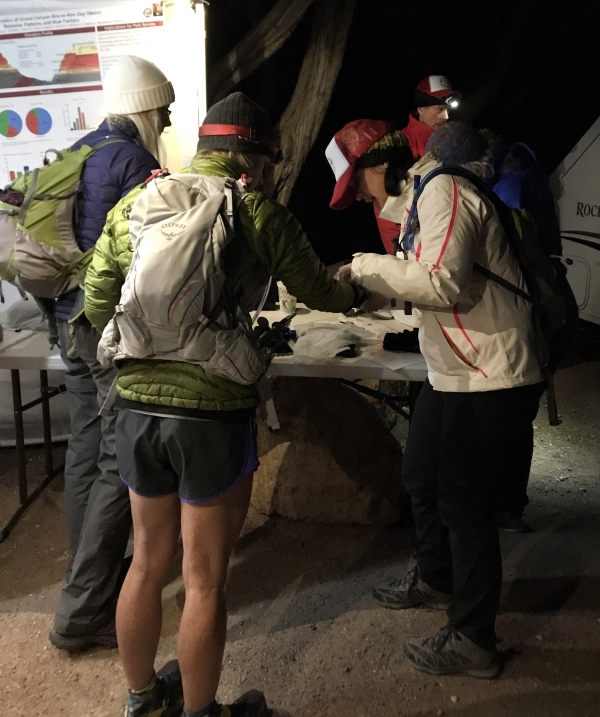 A team of researchers led by Sandia National Laboratories (pictured in photo by Michael Padilla) is seeking answers to these questions through the “Rim-to-rim wearables at the Canyon for Health study, known as R2R Watch, which is a collaboration with the University of New Mexico and the National Park Service and funded by the Defense Threat Reduction Agency (DTRA).

According to Sandia spokesman Michael Padilla, fatigue is defined as extreme tiredness, typically resulting from overexertion, either physical or mental, or illness. Padilla said fatigue is easily recognized when it hits, but the cause and seriousness are often unclear.

“We sometimes sense that we are getting sick or that stress is beginning to affect our health,” said Glory Emmanuel Aviña, Sandia’s R2R WATCH principal investigator. “With this study, we hope to identify predictive signatures for fatigue and quantify the type of fatigue. Is it manageable, meaning your body can recover once the cause is removed, or is it indicative of a potentially catastrophic health outcome?”

Padilla said the three-year study of rim-to-rim hikers at the Grand Canyon seeks to predict the early onset of declines in performance and health. The first round of data collection, held last fall, tested wearable fitness devices for data collection, refined cognitive tests and identified correlations between fatigue and declines in cognitive abilities. The team recently conducted the second round, which collected higher quality data and confirmed analyses of the early trends identified in the first round. Further studies will refine the predictive ability of the models.

The morning of the study, hikers at the South Kaibab trailhead marveled at the fresh snow on the opposite side of the Grand Canyon as the sun peeked above the horizon. The temperature stood at 27 degrees. The physical trail ahead was 21 miles from rim to rim, including a one-mile change in elevation, extreme swings in temperature and the mental challenge of the uphill second half.

The first set of R2R WATCH participants, a military group, arrived at 3 a.m. Sandia and UNM teams collected vital health information from the volunteer hikers, administered cognitive tests and outfitted them with wearable fitness devices. Those devices provided a window into the hikers’ physiological changes during their rim-to-rim trek.

“This study allows us to correlate physiological and cognitive markers with rim-to-rim hike performance,” said Cathy Branda, the Sandia project manager. “We can also compare military study participants to civilian volunteer hikers, a comparison of great interest to DTRA.”

According to Emmanuel Aviña, identifying which physiological and cognitive markers are most important for predicting performance and fatigue poses a scientific challenge. Combining those markers with their different sensor-technology requirements into a single wearable device will be a future engineering feat.

“Our eventual goal is real-time data analytics,” Emmanuel Aviña said. “Right now, we collect data and download it after the hike for analysis. But what if you could analyze data as it’s being collected? If a real-time analysis showed evidence of physiological, cognitive or genetic predictors of fatigue, individuals could receive early warnings of potential health concerns.”

Sandia’s R2R WATCH study began in 2016 in response to a DTRA call for proposals to evaluate commercial and government off-the-shelf wearable devices. R2R Watch is an extension of a previous study by the University of New Mexico and the National Park Service that was launched in 2015 by Emily Pearce, a former Grand Canyon park ranger. It focused on the nutritional intake of rim-to-rim hikers.

“UNM has years of experience in emergency response, clinical populations, blood work and nutritional data,” Emmanuel Aviña said. “We are also thankful that the National Park Service allowed our study to take place in the Grand Canyon, which offers both a controlled environment and an ideal setting for studying performance and fatigue since the hikers have to come back up after descending into the canyon depths.”

The data generated by military personnel in the study is analyzed to understand performance decline in national security settings.

Ed Argenta, Science & Technology manager for DTRA’s Chemical and Biological Technologies Department, said the project will enable DTRA to use real-time data collection and quantitatively show how markers relate to nonlaboratory, mission-relatable performance tasks. Findings on individual markers will inform which wearable devices are most useful both in the attributes they measure and the logistics of use.

“The partnership between Sandia and UNM has benefited DTRA tremendously,” Argenta said. “The Sandia team has provided strong connections with military communities of interest and has recruited individuals to participate in the data collection events. The data collected is critical for analysis and algorithm development, which Sandia is managing and performing as well.”

Argenta said UNM provided subject-matter expertise on the medical perspective and brought innovative ideas to the project, benefiting the project’s data package and subsequent analysis.
“Overall the entire team has been great to work with, and our department looks forward to continuing the partnership with Sandia and UNM under this effort,” Argenta said. “The ultimate goal of developing an early warning to a biological or chemical exposure capability for our warfighters is important. Without great partners, it will not come to fruition.”

The team will collect more R2R Watch data in a third phase shortly. Future analyses will include examining how accurately heart rate variability captures the onset of fatigue and matching effort profiles to effects on the metabolic panel data collected before and after the hike.

“Like other human-subjects studies, the R2R Watch study is a balancing act between pursuing science and being considerate of the participants.” Emmanuel Aviña said. “We can’t just throw devices on a person and stick them with a needle. You have to balance caring about a person’s rim-to-rim hiking experience with collecting solid, unbiased data that answers key research questions.”

Sandia National Laboratories in Livermore, along with its main facility in Albuquerque, is a multimission laboratory operated by National Technology and Engineering Solutions of Sandia LLC, a wholly owned subsidiary of Honeywell International Inc., for the U.S. Department of Energy’s National Nuclear Security Administration.