﻿ A good year for Pleasanton; 2018 could be even better | Around Town | Jeb Bing | PleasantonWeekly.com |

A good year for Pleasanton; 2018 could be even better

Pleasanton’s housing values continue to increase, with the median home value in the fourth quarter of 2016 reaching $1,028,250, which was 11% greater than in the same quarter in 2015.

Overall, city leaders anticipate modest revenue growth that will enable the city to continue to provide valuable services to the community while allocating approximately $5 million annually to the Capital Improvement Program (CIP) while also maintaining reserves equal to 20% of operating expenses.

Also showing continued growth this year are Pleasanton property and sales taxes, the city’s major revenue sources. The property tax base has been steadily increasing since the low of $47.9 million during the recession in FY 2011/12 to $63.3 million in FY 2018/19, a $15.4 million or 32% increase. This has been due to increasing property values and additional residential and commercial development over the past couple of years.

Sales tax revenues have also increased from a low of $15.2 million in FY 2009/10 during the recession to a projected high of $23.7 million in FY 2018/19, an $8.5 million or 56% increase. However, sales tax increases are slowing down as a result of increased regional shopping competition and consumers’ continued shift to on-line sales.

Nevertheless, sales tax revenues have been bolstered by the CarMax and Chrysler dealerships that opened last year at I-580 and El Charro Road, with another dealership now planning to locate at that site.

Also nearby – and adding to the city’s tax base – is the new 112,000-square-foot Pacific Pearl Asian-focused shopping center on the southwest corner of El Charro and Stoneridge Drive. Spokeswoman Jennifer Duarte said the center will begin a phased-opening in the coming weeks, with the region’s popular King Wah Restaurant and 99 Ranch Market scheduled to open in early 2018. 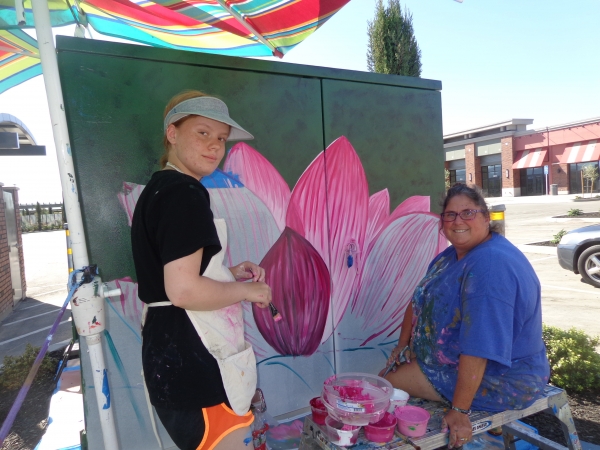 As stores, restaurants and offices prepare to open, high school senior Madison Forseth and professional artist and muralist Suzanne Gayle (pictured above) put the finishing touches to utility boxes they are painting throughout the center. Gayle’s artwork can be seen at www.starartistsstudio.com/

Construction also is underway on the new six-story headquarters building for Workday, with its multi-story steel-structure parking garage and sky-high cranes already visible on Stoneridge Mall Road and along I-580 and the West Dublin-Pleasanton BART station. The headquarters, expected to be completed in 2019, will be Pleasanton's tallest office building.

The fast-growing software company has its roots in the former PeopleSoft company that was taken over by Oracle. It already has a corporate campus on Stoneridge Mall Road, including the former Safeway headquarters building which it purchased.

At one time, Workday also tried to acquire the 170-room Sheraton Pleasanton Hotel next door at 5990 Stoneridge Mall Road. However, the hotel was purchased by an investment firm that will refurbish the Sheraton and change its name to Marriott.

The new Workday campus will be 48% more energy-efficient and reduce potable water consumption by 50% compared to standard office buildings, according to Pleasanton City Manager Nelson Fialho. It will also feature a new public plaza that will connect to a pedestrian and bicycle promenade along the east side of the BART parking garage.

"We're very excited about Workday for many reasons, not the least of which is Workday's commitment to and investment in Pleasanton," Fialho added. "Their success is our success. Workday is raising the bar for companies to establish themselves not only as entrepreneurs but also as good environmental stewards."

Workday also is funding a new joint BART/Pleasanton police service center on the ground floor of the BART garage to support law enforcement efforts on the north side of town.

Although there were no voter referendums or elections in 2017, that will change come November 2018. California Gov. Jerry Brown will be ineligible to run for re-election due to term limits. Lt. Gov. Gavin Newsom, former mayor of San Francisco, a Democrat, and Republican and Rancho Santa Fe venture capitalist John Cox are already campaigning for election as governor.

The terms of four of the seven board members of Zone 7, the local water agency serving Pleasanton, also expire in 2018.

Also continuing through 2017 and into 2018 will be considerations of creating an economic development zone on Johnson Drive that would pave the way for a new Costco membership store in Pleasanton. Politics here were largely set aside after voters rejected that by a 63% majority a measure that would have restricted zoning projects on the street to no more than 50,000 square feet that would have blocked Costco.

With the City Council’s support of the EDZ’s funding plans, the Planning Commission has given unanimous approval to approving a General Plan amendment to allow the new zoning. The City Council is expected to finalize the change in November. Costco is expected to seek a building permit for its new store in early 2018, gain approval by mid-year, and start construction in 2019.

Two hotels have also expressed an interest on building on the Johnson Drive site. Their applications will likely be considered in 2019.

Kottinger Gardens – The new affordable 131-unit apartment complex for seniors on Kottinger Drive has been completed. The multi-story building and cottages will be dedicated in November, with work starting then on the redevelopment of the Pleasanton Gardens site across the street, slated to be finished in April 2019.

Sunflower Hill – A 95-home development along with an adjoining site to accommodate housing for autistic adults planned by Sunflower Hill will get underway in the coming months. The city has approved the development on a former 15-acre commercial site on Stanley Boulevard. The proposed development will include extending Nevada Street from Bernal Avenue along the backside of the proposed homes and then north through the development to connect at Stanley with the junction at Old Stanley

New Civic Center and Library – A task force is meeting now to update Pleasanton’s Downtown Specific Plan. That report, expected in mid-2018, will provide recommendations for improving the downtown district and also making suggestions for how to utilize the current 10-acre civic center property if the facilities on it are relocated to Bernal Community Park, as currently planned.

The City Council has approved a draft master plan for the new complex, which would include a new city hall, library, police headquarters and a community center on a 27-acre site between Bernal and Valley avenues and backing onto the Union Pacific Railroad tracks.

Although no cost estimates have been made nor funding sources identified for building the new complex, its cost is estimated at up to $200 million.

Voters would need to approve the project and an amendment to the existing Bernal Community Park master plan before the project can move forward. That measure, once considered for 2018, is now likely to go to voters in 2020.