Uploaded: Aug 28, 2017
PPIE -- the Pleasanton Partnerships in Education Foundation -- has become a vital organization for raising funds and public appreciation for local schools, and its work is growing under the leadership of executive director Steve McCoy-Thompson.

That was evident Aug. 21 as community leaders gathered in PPIE's offices at 333 Division St. for a special reception to welcome David Haglund (standing left in photo below next to McCoy-Thompson), the new superintendent of the Pleasanton Unified School District. 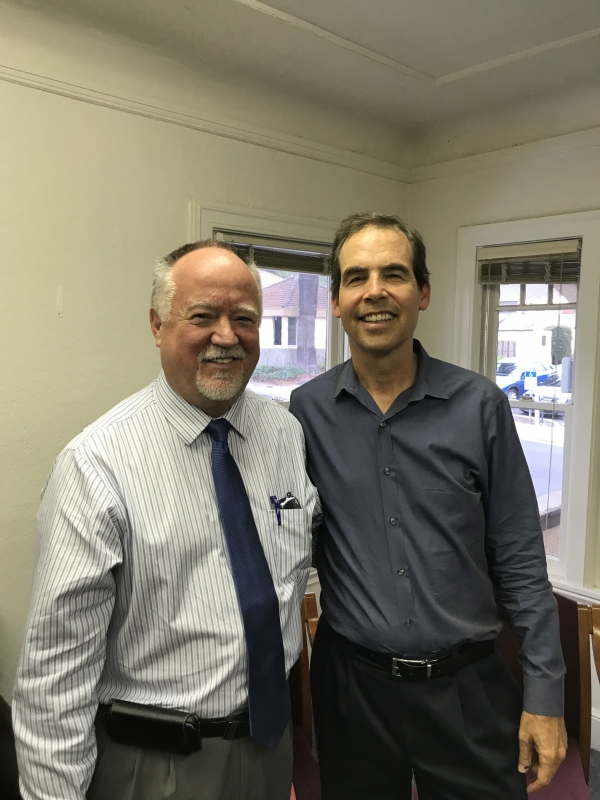 McCoy-Thompson, a Pleasanton resident for two decades with more than 25 years of leadership and development experience with various nonprofit, corporate and government enterprises, was hired to manage PPIE last summer. That followed several tumultuous months of operation after former director Susan Hayes left the organization when her contract was not renewed after three years of leading the nonprofit.

All that became history this week as McCoy-Thompson was applauded for his successes over the past year that included a vigorous fundraising effort, resulting in a contribution of a record-high $523,000 donation to the district last May.

And, as McCoy-Thompson told Haglund and community leaders, that's only a beginning. More fundraisers are scheduled with hopes that PPIE can raised up to $1 million during the current school year.

"We want PPIE to be a voice for education in our community," McCoy-Thompson said. "One of my goals is to leverage the basic resources we have, including Oracle, Workday, Clorox, Fremont Bank, Robert Half International and Black Tie Transportation and many other businesses for significant donations to our schools."

Haglund, who stood by PPIE's front door greeting the guests, beamed with appreciation as McCoy-Thompson announced plans for fundraising efforts. The 29-year educator who most recently worked as a deputy superintendent in Santa Ana became Pleasanton's fifth school district leader since spring 2015 when he took the helm July 3.

Although holding a doctorate degree is deserving of being addressed as "Dr. Haglund," he asked everyone to call him Dave or David.

"There's a reason for that," he said. "When you join a team as I've done, I hope to call you by your first names -- once I remember them all. The fact that you can call me by my first name doesn't change my focus."

"We have wonderful schools and wonderful families that are doing wonderful things for our schools," he added. "But we have some work to do. I don't think we can accomplish what needs to be done by ourselves. We're going to accomplish it together."

"I've been here only a short period of time, but I've already had great conversations with many in Pleasanton," Haglund continued. "We've talked about many issues. We've talked about getting trust back in the school district. These are all the things that I'm excited about."

In meeting with teachers and school administrators, Haglund said one of his first moves was to give out his cell phone number to everyone. "They need to know that they can reach me," he explained, pointing out that even though that happened more than a week ago, he's had only eight calls and texts.

He believes that shows his visits to all the schools and many classrooms with school trustee and former Hart Middle School principal Steve Maher paid off.
"Everyone knows who I am and that I'm listening," he quipped. Like PPIE, "I'm here to help."

The upcoming events being hosted by PPIE include:

Sept. 28: PPIE Advisory Council lunch at Oracle in Pleasanton, to be led by Joan Laursen, school board president, with a focus on promoting productive business-school relations.

Oct. 13: Night of the Stars Fall fundraiser dinner and wine tasting at Castlewood Country Club with tickets now available for $75.
April 15, 2018: PPIE will join with Veeva Systems and ClubSport Pleasanton to host the fifth annual Pleasanton Run for Education in downtown Pleasanton.

More information is available from McCoy-Thompson at Executive [email protected]