Uploaded: Jul 30, 2017
I’m just back from a one-week trip to Washington, D.C., Mount Vernon, Williamsburg and Thomas Jefferson’s estate at Monticello. For me, it was a chance to re-visit K Street and the Capitol where I worked in the 1970s and ‘80s, as well as to drive by the old neighborhood where we lived in Fairfax Station, Va.

If you haven’t been to Washington or taken your kids there, it’s a fun and educational trip for all. Repeat trips as mine always add new visions, with ever-changing venues at the Smithsonian to restorations at the National Cathedral, the Washington Monument and the Capitol building, itself.

This was my first look at the Korean War Veterans Memorial, just around the corner from the Jefferson Memorial and close to the Vietnam Veterans Memorial wall. As an Army veteran who served in Korea after the war, I took special interest in the realistic images of a squadron of 19 figures moving across the lawn. Seeing this memorial was also a reminder that the war continues. Although the fighting ended on July 27, 1953, when with the signing of an armistice agreement, no peace treaty has ever been signed and the two Koreas remain in frozen conflict. 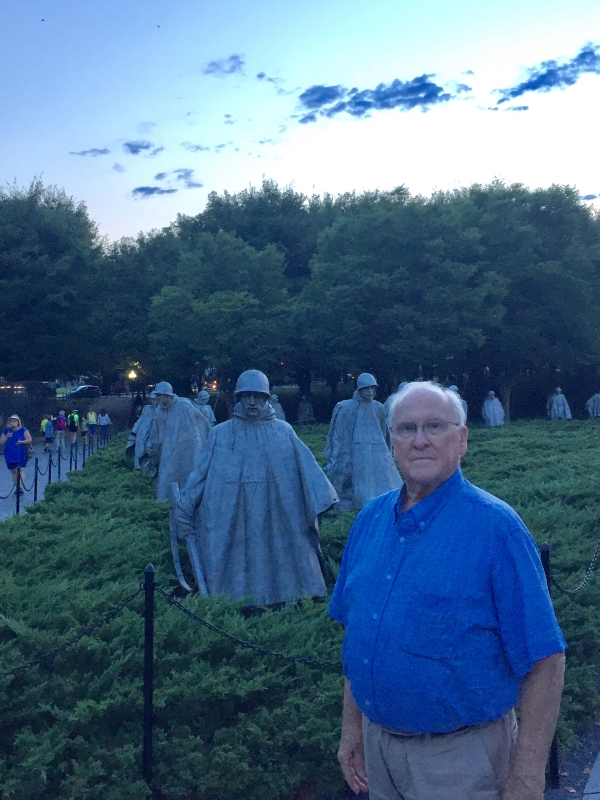 The memorial consists of multiple structures that honor those who sacrificed during the three years of conflict. Its mural wall measures 164 feet long and eight inches thick, with the tip of the images of troops intersecting a circle of trees surrounding a “Pool of Remembrance.” Designed by American sculptor Frank Gaylord, each larger than life-size soldier stands more than 7 feet tall and weighs about 1,000 pounds.

For the early evening visit, I had the company of my grandson Jordan Nally. Jordan is an Amador Valley High graduate who is working this summer as a Capitol Hill intern for Idaho Congressman Raúl Labrador. Part of his responsibilities is to immerse himself in Washington highlights of interest to Labrador’s constituents, including memorials. So we started at the tip of these stainless steel sculptures, walking back to the last row of these battle-worn-looking soldiers.

Although they all look similar, it’s their uniforms and faces that are strikingly different. At the front, a soldier, probably the platoon leader, holds an M1 rifle with his helmet unbuckled, one foot out as he leads his squadron forward. Stone-faced, his eyes are focused forward in search of the enemy.

In the second row of the 18 men behind him is one square-faced soldier looking off to the side with a calm, but apprehensive expression as he also watches the right flank for snipers. His partner also holds a giant-sized telephone with an antenna jutting up from his shoulders, a rifle at his right side.

Behind these two, a soldier wears a heavy Russian-styled hat to protect him from the cold. Another looks back and shouts at those behind him, pointing at something to the side with his rifle. Behind, a seemingly disinterested soldier stares off to the distance.

Another soldier carries a large bag. He has no rifle and may be the corps medic. Then comes a soldier with a moustache, wearing a furry hat with ear flaps, but no helmet. He looks straight ahead, eyebrows raised, eyes wide open, appearing astonished at something he is seeing. Behind him, two soldiers talk to each other. One carries a machine gun, the other the gun’s tripod. Alongside, a soldier glares at them with an angry look on his face, rifle raised at the ready. He appears to be frightened.

In the last row, the men all move forward except for one who is standing still. He may be the squad’s officer, looking around to make sure everyone falls in line as the soldiers move forward.

At the front of the squadron, there’s a “Pool of Remembrance” and a plaque, with the message: “Freedom is not free. Our nation honors her sons and daughters who answered the call to defend the country they never knew and a people they never met.”

How true that still is today.


There were five million lives lost in that Korean war, Half were Koreans from both side of the 38TH parallel. The Chinese army directed by Mao Zedong had an estimated two million deaths.

Americans killed in Action in that Korean war was nearly forty thousand and one hundred thousand wounded.

Eisenhower thought Truman did not do enough to end this war quickly, and threatened nuclear option to bring all sides to an armistice.

The civilian deaths in this short war exceeded all other civilian war deaths.


Jeb...THANK YOU for your service.