Uploaded: Nov 17, 2016
I just got back from Maine where I visited my 100 year old mother at Piper Shores in Scarborough. Piper Shores is a non-profit, retirement community with three levels of living options – Independent Living in a resident's own apartment, Assisted Living in the adjacent Holbrook building, and Nursing Care in the "hospital-like" setting portion of the Holbrook.

Mother entered Piper Shores in (corrected year and age) 2007 at the age of 91. She lived in her own apartment for over 8 years. There's even a photo of her on the Independent Living web page. Mother didn't realize this was there until I told her when I visited in January for her 100th birthday party.

Mother is now at the point of needing full time nursing care. My sister Alice and her husband and my brother Martin and I met with the Holbrook staff on Monday, November 11th to decide if mother should stay in the Holbrook or move back to her apartment with round the clock attendants. We all agreed she should stay at the Holbrook.

She has a very comfortable room there. It is larger than the typical hospital room with a window at one end that keeps it bright and sunny during the day. Mother has lost most of her eyesight to macular degeneration, but she can make out light and dark and shapes. This portion of the Holbrook is staffed with trained attendants round the clock, and mother has her own personal attendants who take care of her during the day. 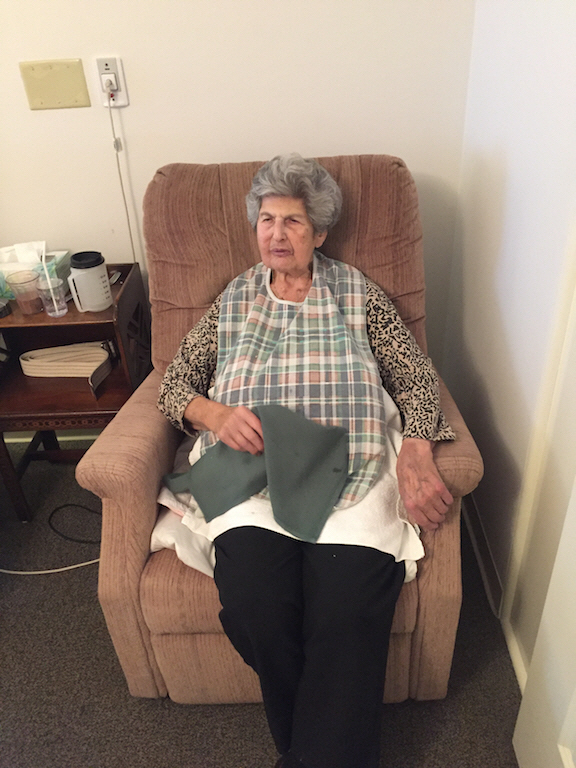 When I was visiting she had to go to the bathroom every 20 minutes. She's able to use a walker to go to the oversized bathroom in her hospital suite, but needs help using the toilet. She's on a bland diet with soft or blended food. She doesn't like the taste of it and didn't eat much when I was there, but her weight is 160 so at least she isn't fading away.

I asked my brother if he though mother would make it to her 101 birthday in January, but he said she has congestive heart failure and he didn't think she would. So it was good I was able to visit her with my brother on Monday and Tuesday. She couldn't see me, but she did know I was there. Her mind is still good but her body doesn't work well anymore. William Shakespeare summarized it the best as the Seven Ages of Man from "As You Like It," whose heroine is also named Rosalind.

Shakespeare's poem is specific to men in Elizabethan England. I found a variation on the theme by Julia Sneden, which is much more appropriate for 20th Century American women.

What a sweet story. As long as your mom is not in unmanageable pain, I hope that she stays alive.

There is nothing in the world like a MOTHER...HOORAY!

Let her know how you grateful you are that she gave you birth!


Thanks for the kind words, Cholo. My mother is in some pain from gas and bloating. I know how that can be, so I have a bottle of Pepto Bismol handy at all times. She's being given Mylanta and keeps a hot water bottle on her abdomen.


Above comment is about promoting a business...please remove it....

It is difficult to keep these promotional links out of replies. I shall remove the comment.


Some good news about mother. My brother said she recently got an electric wheelchair so she can sit up to eat. She is eating better now and can move around the halls and not be confined to her hospital room. So it looks like she will make it to her 101st birthday on January 9, 2017. Viva and Hooray as Cholo would say!


My brother phoned this morning that mother passed away last night. The new wheelchair made her last week easier for her but at almost 101 years old, her time on earth was up. I don't believe in an afterlife, but if there is one, I hope she's in a better place now.

I'm very sorry to read the news about your Mother. I've enjoy reading the many blogs you've written regarding your relationship with her and family history.

It is really starting to hit me now. She had a long, productive, and happy life. When she wanted to say something nice about someone, she would say "He or she (was or is) a good person." She was a "good person."

You're a good person too.