Uploaded: Oct 20, 2016
We live in a very old house by Pleasanton and California standards—it’s well over 120 years old.
However, compared to what we saw in Boston, it would not make any list of historical significance. It is a mere teenager. Following the Freedom Trail in Boston, many of the structures date to the 1600s.
What’s striking is the contrast—a 3-story building from the 1600s next to an ornate 10-story building from the 1900s and then a modern glass-sided skyscraper going up 50 stories or more. Boston, like San Francisco, has been redeveloping under-utilized urban spaces as people have wanted to move back into the city. 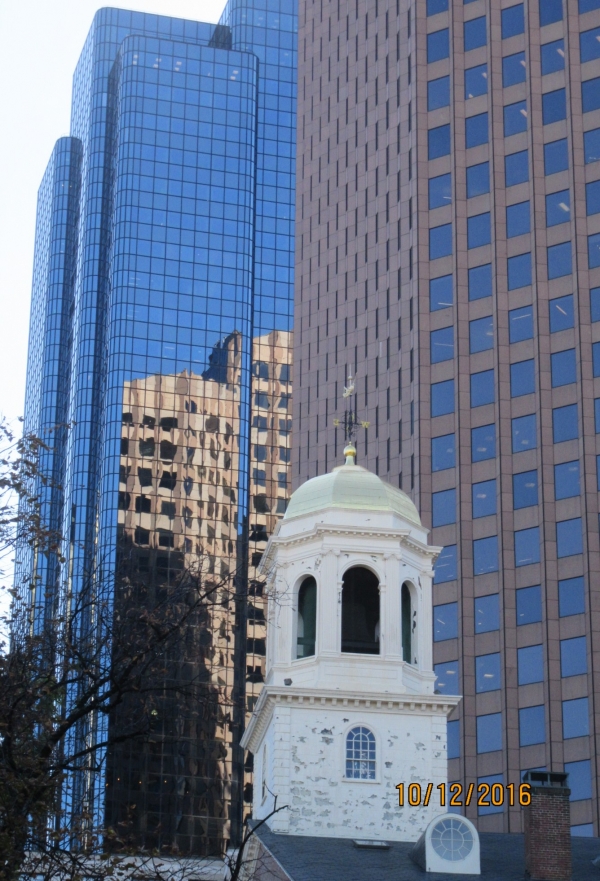 What they seem to have done well—the awful City Hall building notwithstanding, is retain the historically significant buildings and add interesting new architecture. City Hall looks like a prison gone mad.
We came east to check out the leaves and eat lobster before attending a ministry conference in Pennsylvania. We were delighted on both accounts. We spent a couple of nights in the White Mountains of New Hampshire and enjoyed a wonderful drive on the Kancamagus Highway checking out granite-lined gorges and the amazing colors.
When we circled back to our inn, the vistas along the gap east of Mt. Washington (the tallest mountain on the East Coast), the yellow, orange and red leaves wove an amazing tapestry across the slopes as far as you could see. 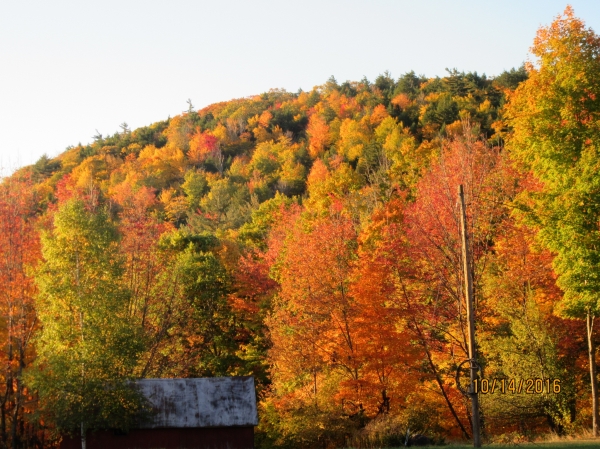 I have seen pictures of the fall here for many years, but, as they say, seeing is believing.
We stayed at the Inn at Crystal Lake, a small bed-and-breakfast (eight rooms) with a full dining room and delightfully funky Palmer House Pub. (the name dates to 1884 with Nathaniel Palmer built the house on a hillside. While dining there on a Thursday, a couple at the next table engaged us in a conversation. Although they had lived on the East Coast for 30 years, the wife knew Pleasanton and what’s more had a sister in Sierra City along Highway 49.
We used to vacation there (about 45 miles northwest of Truckee over Yuba Pass on Highway 49 after it branches off Highway 89 in Sattley. Here we are 3,000 miles from home and learning their son worked at Bassett’s Station where we had picked up ice cream two weeks ago. What a small word—other than family and friends, there are just two other people in my wide circle of acquaintances that routinely go to that area, Councilman Jerry Pentin and financial advisor Terry Johnson.

When it came to meals, I majored in lobster. Two of the meals were enjoyed coast side, but the best value was in downtown Boston right across from Faneuil Market. The restaurant, N26 (part of the Bostonian Hotel) offers a full lobster meal for just $20 lunch or dinner. 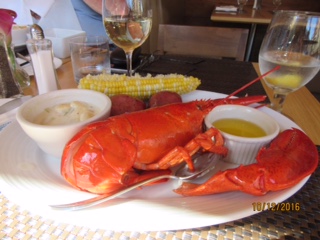 That’s a boiled lobster with the claws and tail pre-cut, an ear of fresh corn, two boiled red potatoes and a cup of clam chowder or lobster bisque. It was $10 or more than that across the street in the Quincy Market and that wasn’t in a sit-down, white clothed restaurant with full bar and a good wine list.
To my taste buds, you just cannot beat the sweet taste of lobster, dipped in lemon butter and matched with a California Chardonnay.

You've convinced me that I haven't lived until I head to the East coast to experience the fall colors and history of the region.

I'll be there next October.


I grew up there, so I'm a little blasé about the colors. However, lobster or a proper clambake, that gets the Salivatori Glands going.

A little reading and roadway trivia: H.P. Lovecraft wrote about "The Old Post Road" in some of his stories. You can ride Route 1A north of Boston and still see some of the buildings wrote about. Even some of his towns are only lightly renamed: Innswich is only slightly renamed from Ipswich.

Report Objectionable Content
+   1 person likes this
Posted by kristinewatson, a resident of Bonde Ranch,
on Oct 26, 2016 at 12:48 am
kristinewatson is a registered user.

There is also excellent sea food...CHEERS!

Now is the time!

Report Objectionable Content
+   2 people like this
Posted by Marguerite Platt, a resident of Stoneridge,
on Oct 26, 2016 at 7:19 pm


I was born in Portland,Maine,and your lobster pictures reminded me of growing up with lobster,fried clams, and picnics on the rocks at Pemaquid, Maine. Fall was my favorite time of year--catching the falling leaves on my way to school,going to the apple orchard to buy a winter supply of apples etc. My regards to a former piano student--Betty Gail, your wife.