I just got back from Maine where we had a family reunion to celebrate my mother's 100th birthday on January 9, 2016. Mother looks great for 100. I told her she doesn’t look a day over 80 and maybe not even that.

My brother, Martin, arranged the party. He and his wife, Linda, have three sons, Seth, Harry, and Ben. Here's a photo of me and mother with Seth's daughter Adina, 6, and Harry's daughter Lainey, 4, on the right. 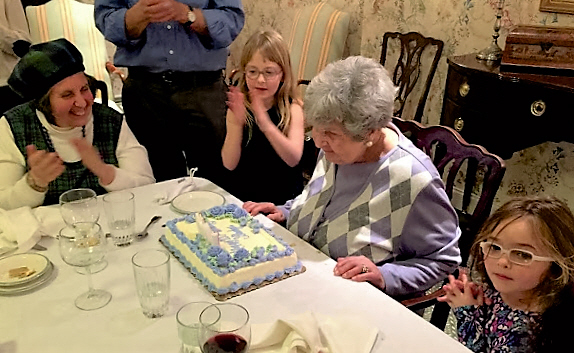 Mother isn't the oldest person in her retirement home. Three women are over 100, with one being 102, another 103, and the oldest at 105. The care at Piper Shores is really good, and all of this good geriatric care is keeping people living longer now.

When I was attending the University of Southern California back in the late '70's, the Gerontology program had just started. The study of aging is essential to extending the lives of millions of people around the World.

My mother's two major problems are loss of vision to Macular Degeneration and keeping her balance. She can still see shapes and read large letters, but she needs caretakers to help her with bathing and getting around her apartment without falling down.

She has three different people who come in for three hours each on weekdays. I've met two of them and they are both very conscientious and helpful.

The staff at Piper Shores is well trained and friendly. There are none of the horror stories about staff members who take advantage of or even abuse the residents. Piper Shores is a non-profit and exceptionally well run, but it is expensive. Most of the residents, like mother, are quite well off and can afford it.

I've considered applying but I would need some financial help to pay for an apartment and the monthly fees. Mother said she would help me, but I'm not old enough yet at 73 to need that level of care. There's a two to three year waiting list, so I may apply later this year. I might be ready to move at 75 or 76. I really dislike traveling back there to visit, so it might be worth the move to be near my mother and brother's family.

Piper Shores scheduled two events for mother's birthday, one at 3 pm for residents and staff and a family dinner from 5 to 9 pm. The kids put on a concert for mother at the earlier party. Linda emailed me photos with information on who's who. 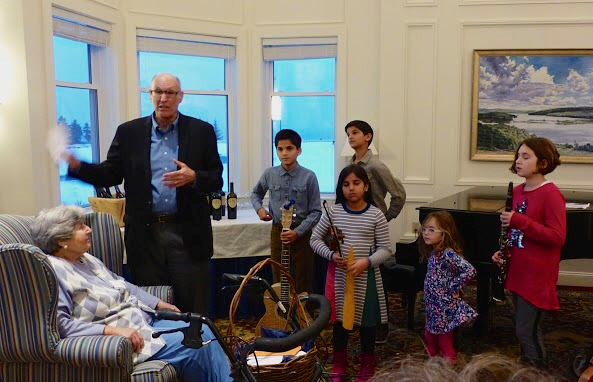 Martin planned the event. Piper Shores provided the space and the food. I enlisted the children to play. You are correct about the care and ambiance at PS, it is terrific."

Most of the family live in New England, so they didn't have to travel very far. My sister and her husband live in San Francisco and flew to Boston to visit his brother first. Then they rented a car and drove up to Scarborough, Maine.

My brother's youngest son, Seth, came all the way from Prague in the Czech Republic with his 6 year old daughter, Adina. Seth's wife, who is Czech, stayed in Prague with their one-year-old son.

They met in Berlin where they were both studying at a University. Berlin is expensive and they were living in a small, walk-up apartment on the 6th floor.

They found larger apartment on the second floor in Prague for less money. Her family lives in Prague too, but Seth said they miss all of the activities available in Berlin. Right now I think Prague is a safer place to be.

I was going to board my cats at the Bishop Ranch Vet but I thought that might be too stressful for them. Since I was only gone over the weekend I decided to leave them at home and put extra food and water out for them.

My neighbor Sally checked in on them on Saturday and Sunday. When I came home on Monday afternoon, they were very happy to see me. They must have felt abandoned for the four days I was gone.

Roz, What a wonderful celebration for you and your family! Thank you for sharing.


A very sweet story! Thank you.


Cholo, Thanks for the link to the dancing dog. Talented lady and cute dog. Roz


Cholo, Thanks for the link to the dancing dog. Talented lady and cute dog. Roz


What a great report Roz. A nice tribute to your mother and you and your caring family.