﻿ My not-so-new truck and my not-so-old Focus | The Observer | Roz Rogoff | PleasantonWeekly.com |

My not-so-new truck and my not-so-old Focus

So far I'm happy with the Nissan Frontier, but not overjoyed with Dublin Nissan. On July 11th the Security Interlock System locked me out; so I called the dealer to get some instructions on what to do.

The Internet lady answered and tried to get one of the salesmen to call me back, but nobody did. I called and emailed but nobody got back to me. I was very frustrated and left a few angry phone messages, but still no one called. I read the manual and my neighbor who also owns a Nissan figured out what was wrong and reset the interlock.

I was glad she fixed it because I didn't have another car to drive. My Maverick is at Diablo Motors and I traded my 2013 Ford Focus in on the Frontier. I offered to give the Focus to my sister Alice in San Francisco. She thought about taking it, because it is small and easier to park in San Francisco, but she and her husband, David, decided his Subaru was all they needed. So they turned down the Focus.

I bought the Focus in March 2013 after my accident. Since my 2009 Focus was totaled, I thought I should buy another Focus. I didn't really have time to shop around, but I specifically asked Livermore Ford for a Candy Blue hatchback. 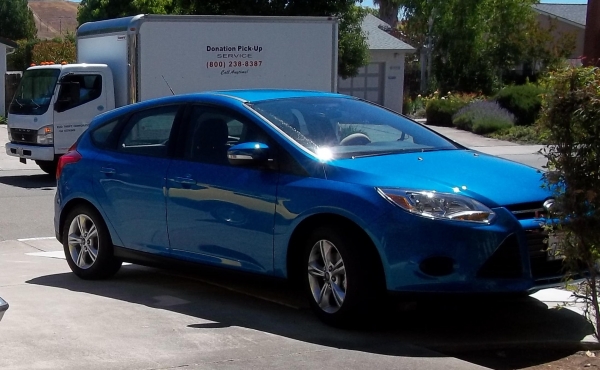 I liked the looks of the Focus, but I didn't like driving it. The windshield is too sloped for me and catches the late afternoon sun, making it difficult for me to see through it at times. So I traded it for the Nissan Frontier.

Now Dublin Nissan is listing my bright blue Focus as a "Coming Attraction" on their website. The asking price is just under $13K. It is probably worth that much. It is in excellent condition with less than 2600 miles on it. It has some nice features including a very good sound system and Sirius Satellite Radio.

My new (or slightly used) pickup also came with Sirius Satellite. I transferred my subscription from the Focus to the Frontier. The Sirius salesperson said I could save money if I gave up the Sinatra station, but I won't give up my Sinatra. That's what I listen to the most. I love the jazzy vocals by Frank, Mel Torme, Rosemary Clooney, Nat King Cole, and others singing the "Great American Songbook," from the last 60 years.

I met Nancy Sinatra 52 years ago when I was an apprentice at the Westport Country Playhouse in Westport Connecticut. This was a few years before she had her own hit song with "These Boots Are Made for Walking." She was there with her then husband, Tommy Sands, who was appearing for a week in one of the shows touring that summer.

She used to hang around backstage and chat with us apprentices. We were about the same age and she wasn't snobby or high hat because her dad was Frank Sinatra. She does a regular show now on the Sinatra station titled, "Nancy for Frank." I listen to it when I'm driving the pickup now.

How much did you get payed for this: Web Link


My youngest daughters favorite song is "The Coffee Song" by Frank Sinatra.

My favorite Frank Sinatra song is "I've Got You Under My Skin". Heard it back in High School in 1981 and have always loved it!

I was paid $50 by the Express for my blog. I was not paid anything else by any other source.

That truck was there to pick up a toilet that I was trying to give away but nobody took it. I paid them $10 to take it away. Web Link


There seem to be an endless supply of copycats...Cholo

Report Objectionable Content
+   1 person likes this
Posted by Cholo Tracker, a resident of Amador Estates,
on Jul 22, 2015 at 3:30 pm


Cholo- who are you?


I'm not on the Faceb..k...I sprang from a body of water, the Oky-Feenokey...on a dark and dreary day...I heard sounds coming from the hanging plants, glitter fell from my lashes an lo 'n behole, I saw myself emerging from the forehead of Pogo...mine was a powerful birth and I never want to return to the water from which I sprang...tee hee

let there be peace...


You have said you are Jewish..... But new evidence has come to light.

Cholo- the game's over. We are going to find out who you are. 0_o


Cholo has been terrorizing the PW for about 8 years now, and used to comment on every single post without failure (until he get banned around 2 months go). Does he have an addiction? Certainly.

Is he sane? Definitely not. Reading Cholo's post are at times infuriating and overall makes me feel uneasy.

I'm sure his little heart broke when he got banned. Good job PW!


There's a theory that more than one person is posting under the nom-de-blog as Cholo. I'm starting to believe that, because sometimes Cholo is helpful and posts useful links and comments, and other times Cholo is childish and annoying like this latest one.

I don't usually hide comments on my blog but some of this "Cholo's" recent comments are not acceptable. Sorry Cholo, get a life!