Uploaded: Jun 29, 2015
I took my old Maverick into Diablo Motors this morning to sell on consignment. I was looking at a Dodge Durango there last week, but decided I really want a pickup truck and not an SUV. The Durango sold yesterday; so it is gone anyway.

At first I was planning to trade or consign my 2013 Focus in exchange for a fairly recent Ford Ranger pickup with moderate miles, but I decided to keep the Focus, which is only 2 years old and less than 2500 miles (I don't drive much), and look for a 2009 to 2013 Ranger. They don't make them anymore and I want a Ranger, not an F-150 or a Dodge.

I used to have a 1996 Ranger, but I traded it in for my 2009 Focus. I should have kept the Ranger. It was a neat vehicle. The 2009 Focus was totaled in my accident in 2013 when a kid (he was 18; so he was legally considered an adult) T-boned my Focus while I was driving through the intersection of Bollinger Canyon and Alcosta with the green light.

After my Focus sacrificed its life for mine, I bought a new Focus with the insurance money. It's a prettier color (candy blue) and a hatch back, but I don't like driving it as much as my old pickup. OK I'm spoiled, but I'm old and earned it.

Most Mavericks were cheap cars and make very good used cars now. My Maverick has all of the upgrades a Maverick could have in 1973, which makes it rather rare. It has the Grabber paint job, which I had repainted last year. It has a V8 Engine, automatic transmission with floor shift, vinyl bucket seats, tinted windows, and air conditioning. I replaced the AM radio with an AM/FM from a 1977 Thunderbird on EBay. 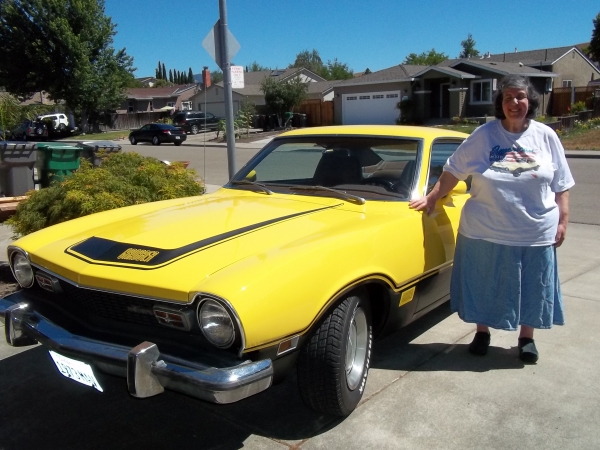 While the car is not a 100 point restoration, it is a very nice Maverick. I had it appraised last year for $16,200 for insurance purposes. It isn't worth that much, but it is worth somewhere between $12,000 and $14,000. So that will give anyone interested an idea of how much to offer.

The engine was running perfectly last week but was idling rough and stalling at stop lights when I drove it up to Diablo Motors this morning. Diablo Motors has a full service department to check it out and fix anything that needs fixing.

They seem like decent guys for used car salesmen. They just celebrated their 21st anniversary yesterday. I'm not sure when the Maverick will be officially available for sale. I'll post a link to the listing here when it is online on the Diablo Motors' website.


I had no idea that the maverick was held to such high esteem.

A pickup truck belies your persona.

This is an unusually well-equipped and high class Maverick. I also spent a lot of money to get everything running just right and looking perfect. It isn't your grandfather's Maverick (well it could be, I bought it used ten years ago).

I've read nearly every one of your posts on the Maverick over the last 8 or so years. I feel like it's my car.

Sad to see you selling it and next time I'm in that part of town, I might just go and take a look at it myself.


I rather liked the Ranger as it was last of the truly compact pickups made by a domestic brand.

I would however say avoid the last year of the truck if you can, that would have been model year 2012, the St Paul plant that produced the Ranger was subsequently closed. As you can imagine quality was probably not job 1 for the workers at that plant in its final hours.

Good luck in the search.

I'd love it if you bought my Maverick. I'd like it to find a good home.

Thanks for the tip on the 2012. So far I haven't seen a 2012 Ranger for sale. There's a 2010 in Fremont that's exactly what I'm looking for but they are asking almost $16,500 for it and that's way out of my price range. If the Maverick sells quickly I'd be closer to being able to buy it.


Roz though I am sorry you have to sell your beloved Maverick, I hope you find the truck of your dreams......BUT I do not care for your above comment "They seem like decent guys for used car salesmen"
Are you implying that used car salesmen are not decent guys. Quite frankly I get tired of the bad wrap used car salesmen get. If you have had a bad experience then take it up with the salesman you dealt with.
To make that kind of derogatory statement here, or anywhere, is just plain rude! Tossing all used car salesmen in the same bucket is not fair and it quite unbecoming to you!